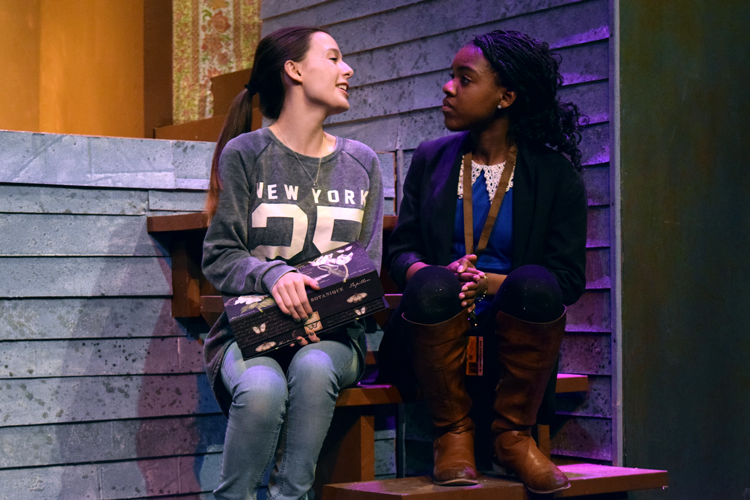 TJ’s theatre department has performed countless plays and musicals from all dramatic eras and genres, and their upcoming production of Hello, Dolly! will take audience members back to classic Broadway roots. Opening night is March 16th, and the crew is perfecting each detail to be ready for their premiere.

The story begins at the turn of the twentieth century and tells the story of Dolly Levi, a matchmaker who is tasked with finding half-millionaire Horace Vandergelder a second wife. Dolly falls in love with Horace, and throughout the musical tries to court him.

Hello, Dolly! has several lead roles, providing major acting positions for many different students. Senior Anja Oss plays Dolly. “After four years, I’m excited to have the lead role in my senior musical for my eighth show. She’s a hilarious character and there’s so much you can change about her, and I like adding my own quirks to her,” Oss commented. Many roles were double-cast; Horace is played by both sophomore Beck Moore (performing the 18th and 19th) and senior Sam Trout (performing the 16th and 17th). Trout played a dead body in last year’s production of Arsenic and Old Lace, and this year made the leap to a lead role. “I was definitely surprised at first, and going from a dead body to somebody with lines and stage directions was a bit of a jump. Once I got used to it, though, I really started to enjoy it,” commented Trout. Senior Jordyn Chappell plays Irene Molloy, who owns a hat shop with apprentice Minnie Fay, played by junior Olivia Palizzi. Chappell said, “Irene seems way more light-hearted than roles I’ve played in the past. I’m really sad that this is my last year, and I don’t really want it to end.” Sophomore Landon Cramer plays Ambrose Kemper, an artist who is trying to marry Ermengarde, the niece of Horace. Ermengarde is played by freshmen Maddi Abram (performing the 18th and 19th) and Annabel Weisenbeck (performing the 16th and 17th). Abram said, “I really enjoy playing Ermengarde because I feel like she is such a dynamic character and very dramatic. It’s really interesting to play a role that is so different from my personality and I’ve had a lot of fun doing it.” Sophomore James Oss plays Barnaby Tucker, the apprentice of Cornelius Hackle (played by junior Evan Domagala), the chief clerk of Horace.

Casting began in early November of 2015, after which the cast did several read-throughs of the musical. They then split up by gender for sing-throughs, which simplified learning each song before putting the pieces together. In early December the cast united to perfect each number and began choreographing each song. Prior to winter break the skeleton of the show was completely mapped out, whereafter the cast began rehearsing onstage. While practicing onstage the actors could interact with the set as it was built and begin to envision themselves performing on opening night.

Parent volunteers designed the musical’s set in early October, and by the time the season began in November, projects were ready to be started. The set consists of a hay and feed shop, a hat shop, the Harmonia Gardens restaurant, a train station, and a cityscape. Many of these scenes were created on multifaceted platforms, which simplified the building process by having less set pieces to fit onstage. The platforms can be rotated, with each side portraying a different scene. Hanging set pieces were also built, and can be lowered and raised between scenes. At the beginning of February, tech crew members divided into their respective roles to design lighting and sound cues, learn stagehand directions, and perfect every backstage detail to ensure seamless productions each night.

This year is the first time that TJ Theatre has been nominated for the Bobby G Awards. The Bobby G Awards are hosted by the Denver Center for the Performing Arts, and determine the qualifiers for Colorado for the National High School Theatre Awards. Director Tambyr Reed applied for the awards in October. Each of the show’s leads are eligible for awards, including “Outstanding Performance by an Actor/Actress in a Leading Role” and “Outstanding Performance by an Actress in a Supporting Role.” The production is also eligible for awards covering production and technical theatre, including “Outstanding Achievement in Lighting Design,” “Outstanding Achievement in Hair and Make-up Design,” and “Outstanding Overall Production of a Musical.” If TJ Theatre wins any of these awards it will win a cash award, and if the lead roles win they will travel to New York City for the National High School Theatre Awards.

The show will open on March 16th and run until the 19th. All are encouraged to attend the production to show school pride and support TJ’s arts community in a unique way, and see what may be one of TJ’s most groundbreaking productions.