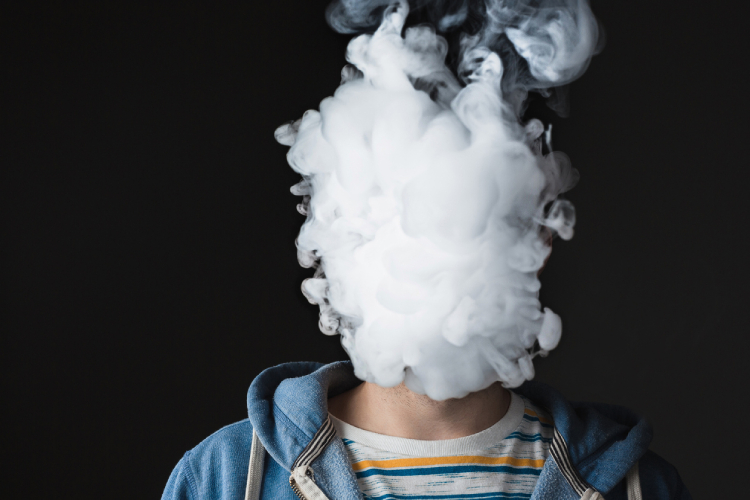 Representation of how vaping has clouded the culture of younger generations. photo by Katherine Unger Baillie

As the world continues to combat the Coronavirus pandemic, another pandemic known as the “vaping pandemic” continues to grow.

For the past few months, TVs have been flooded with political ads regarding the 2020 U.S. Senate election in Colorado between John Hickenlooper and Cory Gardener and Colorado’s 2020 propositions. One of the most highlighted and important propositions on this year’s Colorado ballot is Proposition EE, which was proposed by A Brighter, Healthier Future for Colorado Kids, a “coalition of organizations and individuals focused on improving health and education across our state.” The proposition was also endorsed by both the American Heart Association and the American Lung Association. If passed, the law would impose a tax on electronic cigarettes and other vaping products. Currently, the state imposes no additional tax on E-Cigarettes and other liquid tobacco products, but by passing Proposition EE, these products would be taxed at a starting rate of 30% in 2021, which would gradually increase to 62% by 2027. Tax revenue from the new regulations, which according to Rachel Gordon of A Brighter, Healthier Future for Colorado Kids, is expected to reach “about $176 million in its first full year and about $275 million a year when the tax is fully phased in in 2027” would be used to guarantee universal, free preschool for all Colorado kids, but that’s not all. A Brighter, Healthier Future for Colorado Kids plans on allocating $375 million to schools by 2023, $2 billion for universal pre-k over 10 years, $35 million for affordable housing and eviction assistance by 2023, and $110 million in money for tobacco-vape cessation and other public health programs all from tax dollars earned under Proposition EE.

When talking about how taxing E-Cigarettes and other tobacco products would be a huge boost to the state’s economy and income, it is important to look at why E-Cigarette sales are so high in Colorado. As stated previously, A Brighter, Healthier Future for Colorado Kids plans to allocate $110 million from E-Cigarette taxes towards anti-tobacco-vape education programs, because a large portion of income regarding E-Cigarettes actually comes from Colorado teenagers. In 2017, a Center for Disease Control (CDC) surveillance survey found that 26% of Colorado high schoolers currently used e-cigarette devices, which came out to twice the national average of 13.2%. A related survey conducted by the Colorado Department of Public Health and Environment (CDPHE) found that only 50% of teens consider vaping risky, as opposed to 87% who thought smoking cigarettes was dangerous. In 2020 however, more than 7 out of 10 high schoolers say that vaping is dangerous, yet teen-vaping rates have stayed the same, still at 26%. When asked why he doesn’t vape and why so many teenagers continue to vape despite the consequences, Nate Tewelde, a junior at Thomas Jefferson High School said, “I don’t vape because I understand the long term health risks associated with it and because I don’t want to get in trouble and ruin my future. I think other teenagers vape because they think it’s a cool thing to do or they’ve been pressured into it.” Another student Holden Knostman expanded on what attracts teenagers to vaping, saying it’s “the aesthetic [that] draws people, including myself, in, although I have always just had enough self-control to say no and not start.”

Many health organizations, including the American Lung Association (ALA), Association of American Medical Colleges (AAMC), and A Brighter, Healthier Future for Colorado Kids, refer to teen vaping and E-Cigarette vaping in general as a “vaping pandemic.” According to the CDC, most vape and E-Cigarette devices contain different kinds of aerosols, which many tone down to just “water vaping.” In reality, these aerosols are far from water vapors and are actually the main reason why over 2,800 people have been hospitalized because of vape-related illnesses from April 2019 to February 2020. The aerosols found in these products contain many harmful and just flat-out disgusting substances including ultrafine particles that can be inhaled deep into the lungs, causing long-lasting damage to the lungs, potentially leading to lung cancer later in life. Other substances found in these aerosols include volatile organic compounds (benzyne, ethylene glycol, xylene, toluene, and many more harmful substances), heavy metals (such as nickel, tin, and lead), different chemical flavorings linked to lung cancer, and other cancer-causing materials. Not only are all these aerosols harmful to the user, but they can be inhaled by bystanders who breathe in and ingest the smoke, which in turn harms them as well. Even if a user never encounters any of these deadly chemicals when vaping, their immune system is going to suffer severely as they grow older, and with COVID-19 cases still on the rise, those who have a history of vaping could be at a greater risk of complications from the virus. Also, the concept of vaping and E-Cigarettes is still relatively new, and regardless of how much time and effort researchers put into studying these compounds, they still have nowhere near a general idea as to what the long term effects of vaping may be. For all that’s known, there could be a hidden chemical found in vaping not found in cigarettes that can shorten a lifespan even more than smoking cigarettes would.

With the introduction of new and hopefully approved propositions such as Proposition EE, Colorado has taken a huge step in the right direction when it comes to not only solving the nation’s vaping pandemic but also improving society and everyday lives.