An Enchanted Night at TJ 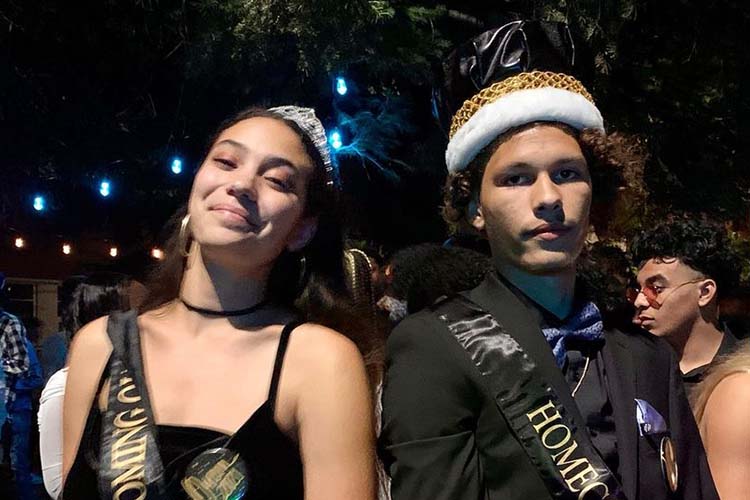 Eliana Channell and Miles Durant after they were honored the titles of king and queen at TJ’s first homecoming dance since 2019. photo credit: @tjspartans on Instagram

TJ’s annual homecoming is back and better than ever.

TJ’s first all-school dance since homecoming of 2019 was two weeks ago, September 18th, 2021. Many tweaks were made to the annual dance to make it a great start to the school year and a great way to welcome the class of 2024 and class of 2025 to their first ever homecoming.

The fun-packed spirit week started with PJ day on Monday, followed by the bonfire in the student parking lot. The class of 2023 parents and sponsors made the bonfire extra special to give every student a warm welcome to homecoming week. The bonfire featured a meal plan, a  shaved-ice truck, and games, with all proceeds going to the junior class, the class of 2023. The next day’s schedule included Powderpuff, an all girl football game featuring juniors and seniors. To match the football theme, Tuesday was jersey day.

Wednesday was the day everybody had been waiting for, the day all homecoming royalty nominees were announced. The 27 nominees, all seniors, included: Nick Neuhalfen, Ramiro Estrada, Maria Londono, Georgia Hartley, Darrah Boyle, Eliana Channell, Alex Swats, Avery LoJacono, Olivia Oss, Louis Chaiken, Luke Lloyd, Camdyn Beery, Markayla Parrish, Annabelle Garcia, Eden Abraham, Tristen Martinez, Randy Yeboah, Dustin Bailey, Kyle Hrin, Dylan Nelson, Adam McPherson, Miles Durant, Holden Knostman, John Dolson, Erin Pointet, Denise Hanselman, and Sara Eyassu. Wednesday’s theme was decades day, with freshmen dressing according to the 50s, sophomores had the 60s, juniors had the 70s, and seniors had the 80s. The wonderful week continued with twin day on Thursday, and the leadership organized event for the day was an all school dodgeball game during lunch. Friday was of course TJ day. Everybody showed up in their TJ spirit gear in preparation for the pep rally and the homecoming football game. During halftime at the game, the homecoming court nominees walked across the field with their families as their names were announced.

Saturday morning, TJ Leadership students and a small number of teacher volunteers helped set up for the dance, and after a long morning of decorating, the dance was held from 8:00pm to 11:00pm. The dance was outdoors so students and staff could be relieved of masks and have as normal of a dance as possible. One strict COVID protocol put in place was that only TJ students were allowed to attend the event.

This year’s homecoming theme was “Enchanted Forest,” and to match, there were fairy lights strung throughout trees, with fake vines and flowers placed throughout, along with  were many more random decorations, like paper lanterns, to make the dance feel as special as possible.

Around 10:30pm at the dance, royalty was announced. Channell was crowned the queen and Durant was crowned the king. When she was talking about the royalty experience, Channell explained that “it was nice to be a nominee with my friends” and she “had a lot of fun with [her] parents walking down the field” at the football game. After being announced as queen, Channell felt “very excited and genuinely surprised.” She humorously said she was flattered that “people like her.” The royalty announcement was a positive way to end the enchanted night.

Many staff members and students have expressed that this year’s dance was the best one they have attended during their time at TJ. Overall, homecoming of 2021 was a successful experience, and a great way to kick off the in-person school year.