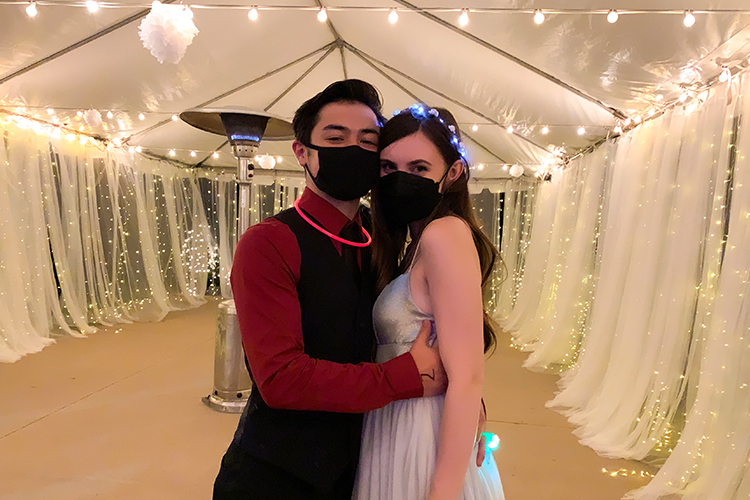 Seniors Jordan Sandoval and Vivienne Deluca enjoy a night under the lights at prom. photo by Caitlin Beery

After not having prom last year, Thomas Jefferson High School hosted prom for the Class of 2021 in the school’s garden.

After TJ prom 2020 was canceled, the class of 2021 waited anxiously for news about their prom. Fortunately, on March 16th, Colorado schools received guidance for prom; soon after, TJ announced on their Instagram that prom was on. Prom was set for April 24th in TJ’s very own enchanted garden.

The news about senior prom was met with a lot of excitement from the seniors. However, with the ongoing pandemic, seniors knew that prom would be different than in years past. Some of the challenges they had to overcome were “COVID, not being able to bring dates, size, possibility of rain, snow or cold, kids sneaking kids in or arguing about dates,” stated class sponsor Elizabeth Lynch. With COVID-19 restrictions and protocols to follow, seniors were curious about what prom would look like. It was later announced that seniors would be split into pods of ten that would have to stay socially distant from each other. Additionally, masks were required at all times, and students would have to fill out a health form and have their temperature checked at the door. These protocols in no way stopped people from having fun. Senior Elena Adams stated, “COVID restrictions were implemented at Prom, but in no way ruined any of the fun. We were allowed to interact and be around people from other pods, but with more distance. We were allowed to all dance and converse as much as wanted. It was great to be able to do that with our class after over a year of not seeing some of those people.”

Besides the COVID-19 protocols, there were other surprises that awaited the class of 2021. TJ’s garden was beautifully decorated with glistening fairy lights and white tents. Additionally, seniors were surprised with a photo booth to forever capture this memorable night. Senior Avery Shunneson stated, “They printed out the pictures on the spot, and they were also available to download after which was super cool. It led to some really funny and cute pictures that I’ll cherish forever.” Besides a few restrictions, prom was generally able to stay the same. “We had 80-ish kids at [the] drive-in [which was an event that took place before the start of school in the summer, where the senior class watched Ferris Bueller’s Day Off in the parking lot of TJ] and 152 at prom. Interestingly enough, it was actually a normal attendance for prom, except dates didn’t come which would have made it bigger,” stated Lynch.

Just like in years past, seniors could vote on Prom King and Queen. This year’s court included seniors Kira Kalinchuk, Terence Johnson, Chris Harris, Lacey Violeta, Lauren Reid, Ava Ward, Jael Iyema, Braedy Gunther, Adams, and Shunneson. At the end of the night, Adams and Shunneson were crowned King and Queen of the prom. Adams stated, “Everyone who was nominated deserved it, and I wish there was a way that every nominee could have won. My boyfriend, Avery, won Prom King along with me, so it was a fun experience to share. Mr. Christoff treated us like real royalty, offering Avery and I a ride in his golf cart back to the parking lot after the dance, which was the best part.”

For the Class of 2021, prom was an incredible experience. Adams stated, “Parents and teachers did a great job organizing, cleaning, and decorating the garden. I think that I actually enjoyed it more outdoors than I would have indoors.” Not to mention, the fun of April 24th was free to TJ seniors. Prom was possible because of the hard work of TJ parents, teachers, and class sponsors, Lynch and teacher Jason Klimczak. It was a night that none of the class of 2021 will forget.