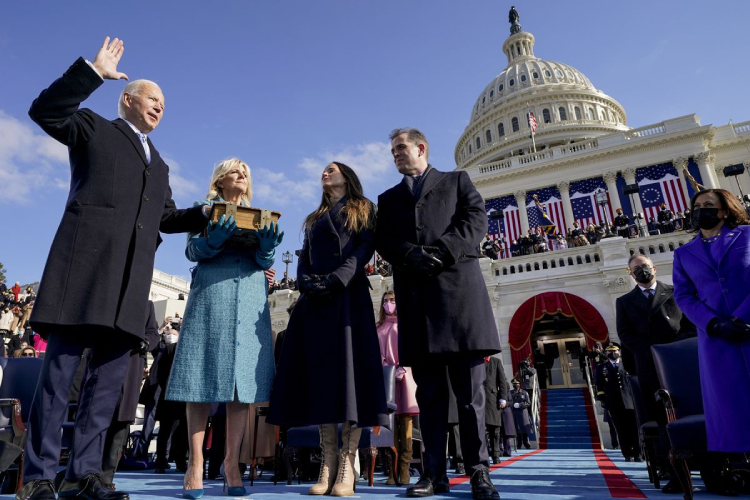 Biden gets sworn into office and becomes the 46th president of the United States. photo by Andrew Harnik

Due to the pandemic, the presidential inauguration looked very different this year.

From the COVID-19 virus to an intense election, the year 2020 has thrown many challenges at the American people. After a close election, the Democratic presidential candidate Joe Biden won. After an intense few months, he was inaugurated into office on January 20, 2021. However, due to the pandemic, the inauguration looked a little different this year.

To begin, the inauguration was live-streamed. There were many iconic people there to show their support for the new president, including the 44th president Barack Obama and his wife Michelle. Everyone present was wearing masks and maintaining social distance due to the pandemic safety guidelines. The inauguration included amazing performances by Lady Gaga, Garth Brooks, and Jennifer Lopez. One part of the ceremony that stuck out to many people was when poet Amanda Gorman shared a beautiful poem she wrote specifically for the event.. Her poem touched on many topics, including all of the challenges the American people have faced during 2020. There were many parts of the ceremony that people will remember including the performances, fashion, and even a photo of Bernie Sanders that went viral on the internet After this memorable ceremony, President Biden got straight to work.

President Joe Biden has only been in office for less than a month, but he has already accomplished a lot. Within the first week of his presidency, America rejoined the Paris Climate Agreement, repealed the transgender military ban, and mandated masks across the country. He is also working on ending private prisons and taking steps towards economic relief. There are so many other things that he has done or is in the process of doing. It is clear that Biden has big plans for his next four years in office, and this is just the beginning.

While the presidential inauguration looked different this year, it was definitely memorable. Based on how intense this election was, it is evident that there will be lots of change in the next four years. After the crazy few months the American people have had, everyone is hoping to return to some sort of normalcy in the very near future.