An Ocean of Oil 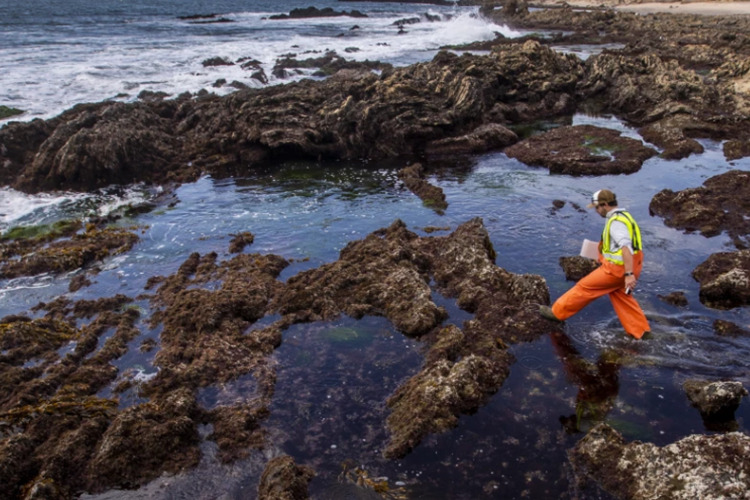 The clean up of the California oil spill has been vigorously done by researchers, environmentalists, and government officials. photo courtesy of Los Angeles Times

An oil pipeline leak caused a major spill off the coast of southern California, harming nearby wildlife and coastal communities.

On October 2nd, 2021, an oil pipeline leaked over 100,000 gallons of crude oil off the coast of southern California. The event was initially discovered on Friday, October 1st, through the consistent reporting from boaters off Orange County and residents of Newport Beach, who claimed to have smelled petroleum in the air and saw an oily sheen on the water. The Coast Guard further investigated the issue and confirmed that there had been an oil spill. The source of the spill was traced back to a pipeline owned by Amplify Energy, a Houston-based company that owns and operates three offshore platforms that pipe oil into Long Beach. Amplify’s CEO, Martin Willsher, stated the company did not notice the leak until their officials saw oil in the coastal waters the morning after the initial civilian reports had been made.

The specific structure that had leaked is known as the San Pedro Bay Pipeline, which was installed off the coast of California in 1980. The pipeline stretches more than 17 miles and measures 16 inches in diameter, moving crude oil from Platform Elly offshore to the Beta Pump Station in Long Beach. The cause of the leak is currently under investigation, although Willsher and Coast Guards have evaluated a section of the pipeline that appeared to have been damaged for a long period of time, causing its severity to increase over time before it ruptured. Observations showed that a thin thirteen inch crack may have initiated a slow leak that was difficult for officials of the company to detect. A Coast Guard investigator claimed the pipeline was likely damaged by a ship’s anchor several months to a year before it ruptured, possibly taking multiple hits from other ships passing through the area.

This oil spill has evidently had a drastic effect on the marine wildlife communities surrounding and encased within the areas of the waste. Since the oil spill occurred recently, it is too soon for researchers to determine the long-term effects the toxicity of the oil has on plants and animals. However, it has already been shown that the oil is covering sea birds and threatening a multitude of protected environmental habitats and species along the coast. The spill has devastated sensitive beaches and wetlands, forced the closure of fisheries, and harmed or killed dozens of fish and birds, including threatened snowy plovers. Snowy plovers are a species of bird that nests along California beaches, being an indicator of the health of the beach communities and coastal ecosystem. If species crucial to the environmental well-being of the coastlines are eliminated or severely endangered by this oil spill, the consequences on the marine ecosystem will be devastating.

Along with these negative impacts on wildlife, human health is being threatened by the coastal oil spill as well. Based on research of health, the effects can range from respiratory damage, liver damage, decreased immunity, increased cancer risk, reproductive damage and higher levels of some toxins, specifically hydrocarbons and heavy metals. In terms of this recent oil spill, researchers are encouraging residents to avoid exercising, swimming, surfing, fishing, or walking their dogs near impacted beaches and wetlands. The Orange County Health Care Agency County Health Officer, Clayton Chau, has issued a health advisory, urging people who have come into contact with the oil spill to seek medical attention as soon as possible. It has been expressed that humans are more likely to develop symptoms if exposed to spilled oil over a long period of time. For those who have come into contact with the oil directly, if certain areas of the body, such as the lungs, eyes, mouth, and mucus membranes, are exposed instead of just your skin it can result in a more drastic health concern. If your skin comes into contact with spilled oil, it can cause a painful rash and even be absorbed into your body. Indirect exposure, through inhalation, is also a concern, as it could possibly lead to a reactive airway disease similar to what is seen with asthma or bronchitis.

Although the leak is no longer active, it is possible that around 144,000 gallons of oil may have spilled into the ocean from the thirteen inch gash in the pipeline about four and a half miles offshore. Amplify Energy is publicly stating that no more than 126,000 gallons of oil spilled, though the quantity is still indeterminable at this point in time. Local officials, who feared an environmental catastrophe, are becoming more hopeful that the total spillage will be less than initially feared due to the washing up of crude along the coast. Occurrences such as these allow for an easier clean up of the spill. The California oil spill was a drastic disaster for the southern part of the state, and it demonstrates the dangers oil has on the physical well being of our planet’s oceans.