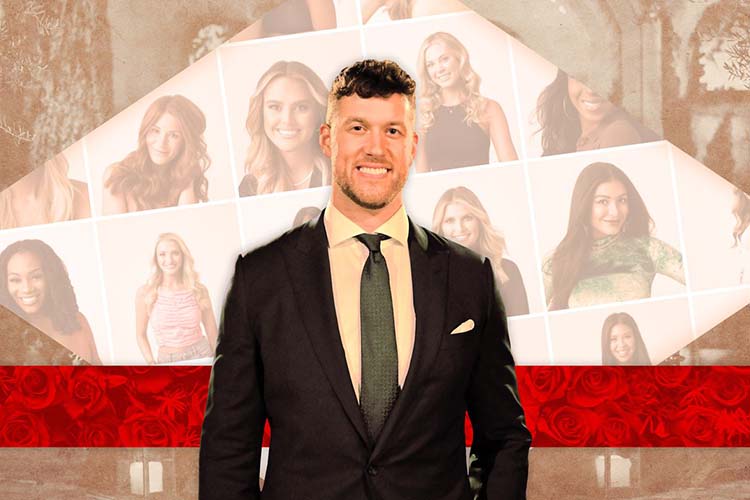 The man of the hour narrows down his wife in a sea of contestants, one rose at a time. photo by ABC/Getty Images/Ringer illustration

The Bachelor returns after a year, staying true to its roots with a white bachelor courting 30 women.

About a year ago, the second semester of junior year did not call my name as the SAT crept upon me and school was taught virtually. You would think this would encourage me to veer my eyes away from more blue light, but The Bachelor kept my attention. I was more excited than ever for the first man of color, who also shared my plight of Black Lives Matter, to find his wifey. This was such a monumental moment after protests filled the summer streets, calling attention to the ever-present racism integrated in every part of society, so much so that my best friend stopped clowning on the pursuit of love on reality TV and watched the season with me. It quickly unraveled with the bachelor choosing a white woman whose racist past was exposed through social media activity as the previous host of The Bachelor defended her actions. This racial controversy and the COVID-19 pandemic prompted a yearlong hiatus with two bachelorette seasons, providing a slew of dashing eligible bachelors that would also not put up with the culture of white cluelessness ingrained in The Bachelor franchise. This enterprise followed the scope of racial conversations in America: their issues were exposed, they had to step out of their ease to address it, and then they moved on with another white bachelor.

Clayton Echard was introduced on the last season of The Bachelorette with a genuine desire to find a partner and start a family. I liked him because he was a genuine guy who I did not envision being The Bachelor. He could have returned to his Missouri life, found a lass to fulfill his throwback romanticism, fulfill his dream of being a father, and live happily ever after. Instead, the season premiere capitalized on his Midwest suburban life to paint a picture of a typical white American man who grew up playing football. I was thrilled for the dynamic storyline that was made up for by the beautiful women on my screen.

As each of the women introduced themselves pinpointing different areas of origin across the country, I saw one of the girl’s surroundings and recognized Denver receiving the spotlight. Sure enough I was right, and another woman hailing from Colorado displayed her love resume, making me proud of the Rocky Mountain representation. I was even more geeked about my Black queens with one as a law student at Yale University and another as a former olympian. The totality of Black women were one in six of the total cast, but in all, I am glad there were people of color at all. I enjoyed watching the different dresses the women wore and their first conversations with Echard, besides a woman named Claire who ended up getting sent home before the end of the night. She was speaking with Echard when a fellow contestant interrupted them for time with their shared beau. Claire told the other girl to wait while instead, Echard ended his time with Claire to speak to the other girl. Claire returned to the group and spewed to the other women that he is not “her person” and how he is “too nice” for her with a running joke that she hates him. She just met him having the briefest interaction with him. It surprises me how these grown women act immature especially as their behavior is recorded, but attention can change people. My attention is certainly still held as I offer women like Claire advice, behind a screen where she cannot even hear me. It is the thought that counts.

Regardless of my comments staying to myself, now I present that my overall rating of Clayton Echard’s initial episode is a five out of ten. Even though my reaction is at a low level, I do not need to flip a coin to decide whether I will continue watching the season, because I will. I am drawn to this show, because at the end of the day people are catching feelings. It does not mean it lasts forever like the engaged couples at the end hope for, but neither did The Bachelor’s attempt at prioritizing diversity. Cheers to finding love.