Another Great Year of Spartan Tennis 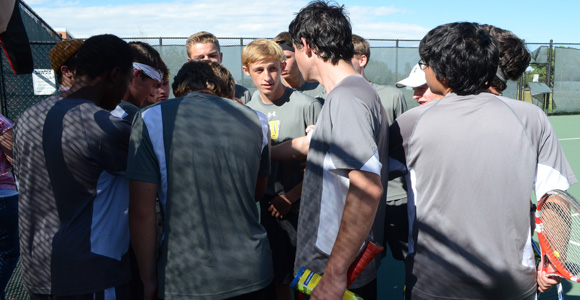 The TJ tennis team gets pumped before a match. photo by Anja Oss

The TJ tennis team wraps up an impressive season.

As the season came to an end, the TJ’s boys’ tennis team continued their winning ways, as they have lost few matches over the past two years. The 2014 season was a success as the boys finished with a 9-4 record. This season showed just as much promise, as the Spartans finished the regular season with a solid record of 10-3.

With eight out of eleven players coming back from last season, the Spartans offered a lot of returning talent. The only new players were freshman Sam Chappell, and sophomores Adam Becker and James Oss (moving up from last year’s Junior Varsity team). “We had a lot of experience this year because we have all worked together before. We developed a strong chemistry which benefited us greatly,” explained senior Jack Willson. Willson played one doubles with fellow senior Henry Allen. Other pairs included juniors Brandon Pietrs and Nolan Summer at two doubles, Chappell and Michael Fletcher at three doubles, and Becker and Oss at four doubles. “It is great having another guy working towards the same goal and there to back you up,” said Willson. Other key members of the team included senior Jonny Sundeen, senior Ben Salinger, and junior Chase Wolf-Tinsman who all played singles. “I enjoy playing by myself because I don’t have to depend on anyone. If I make a mistake, I can only blame myself,” explained Sundeen.

Despite finishing with an 9-4 record last year, the Spartans knew that there was plenty of room for improvement. The boys finished fourth at regionals in 2014 behind Colorado Academy, Evergreen, and D’Evelyn. “We played well last year, but we knew we could do better,” said Salinger. “Last season was fun. Even though we didn’t finish where we wanted to, we were able to learn from it and it made us a better team this season.”

The first big tournament that the team participated in this season was the Denver South tournament on September 25th at Washington Park. The Spartans dominated the tournament last year, beating Denver East, Denver South, Eaglecrest, and others. This year, the boys did not disappoint. Salinger took first place in the two-singles division beating Cherry Creek. “We all played very well. We practiced hard all week and learned from previous mistakes,” commented Salinger. “It was fun winning this tournament, but we have to get ready for our next match.” In addition, Pietrs and Summer beat out Cherry Creek Varsity 2 to get first place in the two-doubles division. “It was a tough match. I’m glad that Nolan and I got the win for our team,” said Pietrs.

The boys had 4A Regionals at Colorado Academy from October 6-8. This was not an unfamiliar setting for the Spartans, as they have been there year after year. However, this year they experienced unprecedented success. All of the boys won at least one match in their respective divisions. Wolf-Tinsman came out on top of the 3 singles and advanced to the State tournament.

The State tournament was held on October 17-19 at Pueblo City Park. Wolf-Tisman, a student at Denver Academy playing for TJ, was the lone Spartan participating in the tournament. In the first round, he defeated Walker Uyemura of Greeley Central High School by a score of 6-4, 4-6, 6-4. In the next round, Wolf-Tinsman fought hard, but fell to Allen Fu of Niwot High School.

After another solid year, there is plenty of optimism in the TJ tennis program. Pietrs said, “I’m going to miss the seniors, but I can’t wait for next year.” As for the seniors, Sundeen said, “I’m really going to miss playing for this team. I created memories and friendships that will last forever. It was a great four years.” The boys had another great season and with a solid group of boys returning next year, the Spartans figure to keep improving and have more success ahead of them.