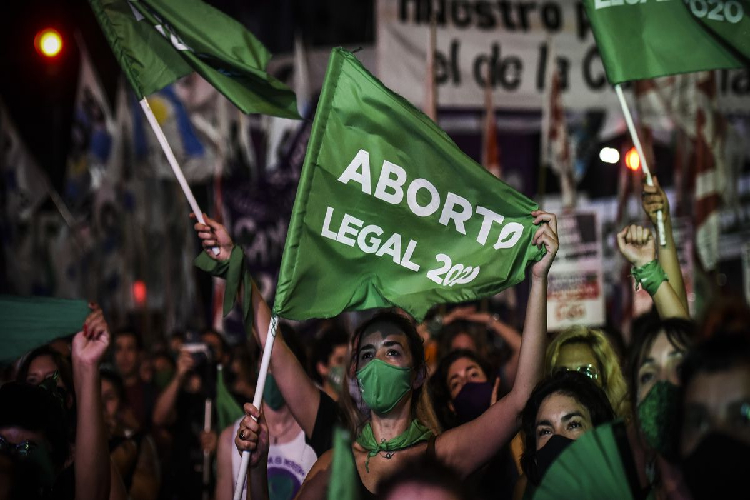 Women gather safely in masks in protest to pass the abortion bill. photo courtesy of vox.com

In December of 2020, many Argentinians were met with a bill that allows women to get abortions up to 14 weeks after conception.

On December 30th, 2020, Argentina made history when it joined the plethora of countries that have legalized abortion. Considering that parts of South America hold more conservative viewpoints due to the prevalence of the Catholic religion, the law that was passed sent a shock wave all around the world. However, this was not the first time that Argentinians gathered to rally about legalizing abortion. Back in 2018, more than one million women rallied as the Argentinian government held a vote on legalizing abortion up to the first 14 weeks of the pregnancy. Later, the Catholic Church opposed this vote and the Senate rejected this bill.

Two years later, in the midst of a global pandemic, a smaller group of women still came out to rally in Buenos Aires. This time around they were met with shocking results: the bill passed. Eighteen-year-old Paraguayan Melian Urizar, who attended the 2018 rally in Buenos Aires, remarked, “I was super surprised when it passed because in 2018 it didn’t and I didn’t have any faith in the people in charge of deciding.” Since Urizar lives in Buenos Aires, she has had the most exposure to the topic, yet the same cannot be said about people from the United States. Lorena Acosta, who is currently attending the University of Texas Permian Basin to study communications, did not hear any coverage on this particular topic. “I don’t have much prior knowledge of Argentina when it came to this particular stance. However, I do watch Univision (a Hispanic news source) and I remember hearing a vague mention of this historic voting in the Senate after it had been in progress for a few years prior.” Not only were some people unaware of the bill passing, but they were also unaware of the political climate of Argentina. When asked if she had any existing knowledge on Argentina, Thomas Jefferson High School junior Coral Mendoza replied, “I am not aware of the political climate in Argentina,” even going further to say, “I was shocked, because I didn’t even know it was not legal.” Argentina is currently being run under a conservative government, and the majority of citizens are still loyal followers of the Catholic Church, hence why the topic of abortion is still somewhat controversial. Although Argentina was not the first country in South America to legalize abortion, it is the largest country in the southern continent to have legal selective abortions.

For those who do not understand why this is a big victory, this bill will now end a majority of harmful and life-threatening abortions. Urizar touched more on how abortions were done on the down-low. “Basically because it was illegal, you had to go to sketchy places and pay a whole bunch of money, and sometimes it would lead to death if the place was too sketchy. Sometimes women couldn’t pay that much money so they had to take misoprostol, which are pills, and since they were doing it themselves it could end up very badly; they had to go to the hospital and sometimes the doctors refused to help them since they were having an abortion, or sometimes they would help them but the women were at risk of going to jail.” Not only were those some of women’s options, but they often turned to dangerous methods if they did not have information on inducing a “safe” abortion. Since abortions were considered “taboo,” it made a woman’s chance of getting information even rarer.

Even though the bill was passed in the last week of 2020, in early 2021 there are still many unanswered questions. The people of Argentina do not know how or where the abortions will be performed. The country could set up clinics similar to Planned Parenthood in the United States; some speculate that they may be done in hospitals. Acosta brought up a good thought in regards to how Argentina will go about the distribution of abortion operations: “Rules for abortion in our country vary by state, leading for certain situations to be acceptable in one state than in the other. I am not exactly sure if they have certain restrictions by local governments as we do here, but in an overall case it does make abortion legal and safe.” Many hope that this action will cause more awareness to be brought towards women’s rights and make an example for other countries.