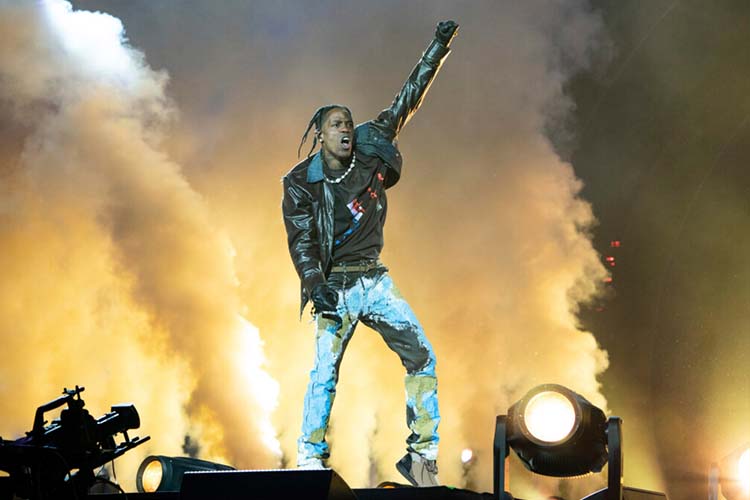 Travis Scott on stage performing during one of his concerts. photo courtesy of abc news

Travis Scott is an American Grammy-nominated rapper and record producer. He is known for his music and his partner, Kylie Jenner. Every year, Scott runs an annual festival, Astroworld, that is anticipated by thousands of people each year. The festival lasts two days, which is generally two days of pure bliss. This past Astroworld, though, was not so blissful. This year’s festival took place on November 5th and 6th in Houston, Texas. On the first night the crowd at Astroworld resulted in at least ten dead. What went so wrong?

The day had a rocky start to begin with. The Astroworld venue had a set capacity it could hold, but throughout the day, people were jumping over fences, sneaking in through various entrances, and completely disregarding security guards. One concertgoer, Neema Djavadzadeh, commented,  “I got there around 3:00 and saw people already struggling to stand straight. There was a lot of mob mentality going on, people willing to do whatever to be in line for merch, food, shows, you name it. A lot of fights broke out throughout the day.” By the time Scott was about to get on stage, the maximum capacity was surpassed. Before 9pm central time, the countdown for Scott to get on stage began. People started to push forward to get a better view. Right after 9pm, chaos ensued when Scott entered the stage. Within minutes, people started to pass out because they were not able to breathe. Another concertgoer, Madeline Eskins, stated that before Scott even got on stage she turned to her boyfriend and said, “‘We have to get out of here’ because I was having constant pressure on my chest, constant pressure on my back, and from the side. I was being squeezed.” She claimed that she tried to put her arms up to create more space but it didn’t work. As soon as Scott started his first song she just remembers “looking up and passing out.” Many others like Eskins passed out, but not all were as lucky to get out of it alive.

Dozens were injured throughout the performance. The injured concertgoers were of all ages, some even as young as 9 years old. The victims that died due to the suffocation of the crowd included Mirza Baig -age 27, Rodolfo Peña -age 23, Madison Dubiski -age 23, Franco Patiño -age 21, Jacob Jurinke -age 20, John Hilgert -age 14, Axel Acosta -age 21, Brianna Rodriguez -age 16, Bharti Shahani -age 22, and Ezra Blount -age 9. There are still victims in the hospital fighting for their lives. Many people blame Scott for these deaths, stating that he knew about them while he was performing and still refused to get off stage. Scott says he is fully cooperating with the authorities, and Jenner released a statement saying: “I want to make it clear we weren’t aware of any fatalities until the news came out after the show and in no world would have continued filming or performing.”

Many of the victims are suing those responsible, including Scott, Astroworld organizers, and others who performed with Scott during the festival. This is not Scott’s first time being sued. He has a history of encouraging fans to disregard security guards and limitations, including the capacity of his concert venues. He has been sued twice due to reckless conduct and pleaded guilty both times, including a time in 2015 after telling fans to rush the stage during his performance in Chicago. Lawsuits are still in the making from the victims of the Astroworld incident. Scott has agreed to pay each victim, but can this tragedy really have a price tag?