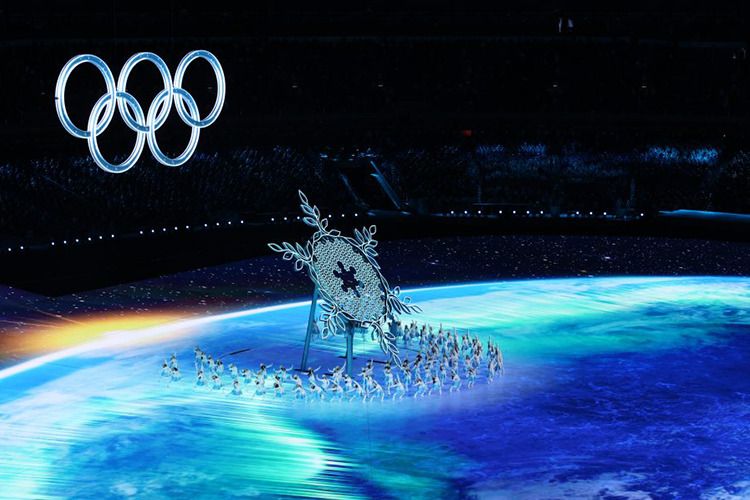 The large snowflake from the Opening Ceremony displayed the countries participating in the Olympic Games with the Olympic rings signifying the start of the games. photo by Adam Pretty

The 2022 Olympic Winter games were presented with many challenges, but participating athletes overcame these obstacles and represented their countries.

The Olympics represent the time where athletes from all over the world come to one place to represent their country in competitive and athletic games. With the different sports seasons there are two different Olympics held every four years, either the Winter Olympics or the Summer Olympics. This meant that 2022 was another year for the Winter Olympics to be held, as the last Winter games were held in PyeongChang, South Korea in 2018. This year’s events were hosted by China in the capital, Beijing, making this the second games to be held in China, with the first being in 2008. This year’s Winter Olympics made Beijing the first city to host both the Winter and Summer Olympics. Much like the last games held in Tokyo, Japan, for the summer events, COVID-19 had a very large presence, bringing more challenges. Even with the virus, rising political tensions, and scandals within the events, the athletes participating in the games did their best, including the United States athletes who performed on this international stage.

By hosting the Winter Olympics this year, China took on a lot of responsibility. Due to the Coronavirus, they made specific protocols for the games, including no audience, masks required unless athletes were actively training or competing, and those who tested positive for Covid-19 could not participate in their event until they tested negative twice, 24 hours apart. China’s “zero COVID” protocol sadly meant that multiple athletes were sent into isolation and missed their athletic events, a few of these athletes being from the U.S.. Along with the virus having a large impact on the games, the rising political tensions that were growing before Russia’s invasion of Ukraine prompted a speech from the president of the International Olympic Committee (IOC) at the Opening Ceremony, pushing for peace. “In this Olympic spirit of peace, I appeal to all political authorities across the world — observe your commitment to this Olympic truth. Give peace a chance,” stated the IOC president, Thomas Bach, looking for a way to promote peace between the different countries’ athletes.

Additionally, this year’s games presented a scandal involving a positive doping test of a 15 year-old Russian athlete, Kamila Valieva. After testing positive for doping, the IOC had to decide how to combat the issue. After consideration, she was allowed to compete in the final free skate events without the ability to win a medal, which brought into question a similar situation with summer Olympic athlete, Sha’Carri Richardson, who used recreational marijuana after the passing of her mother and was not allowed to participate in any events in the 2020 Olympics.

Throughout the 17 intense days of competition in Beijing, 2,900 total athletes from 91 nations competed in 109 events. The 225 U.S. Olympic athletes who were sent to China to represent the country brought home 25 total medals, eight of which were gold. Out of these 225 athletes, 57 of them medaled in their respective events. Many notable athletes were Erin Jackson, the first black woman to win an Olympic speed skating medal, Nathan Chen who won gold in figure skating, and David Wise who earned his third medal for the halfpipe. Unfortunately, not all athletes met the expectations set for them, one being alpine skier Mikaela Shiffrin who took a spill in the giant slalom event for skiing resulting in a lack of a medal despite the medal being expected of her. Another sad event was the retirement of five time Olympian, Shaun White, who also took a spill in the half-pipe resulting in the loss of a medal. Despite these upsetting outcomes of specific athletes, U.S. athletes as a whole worked hard to represent the country and did an amazing job battling all the challenges thrown their way.