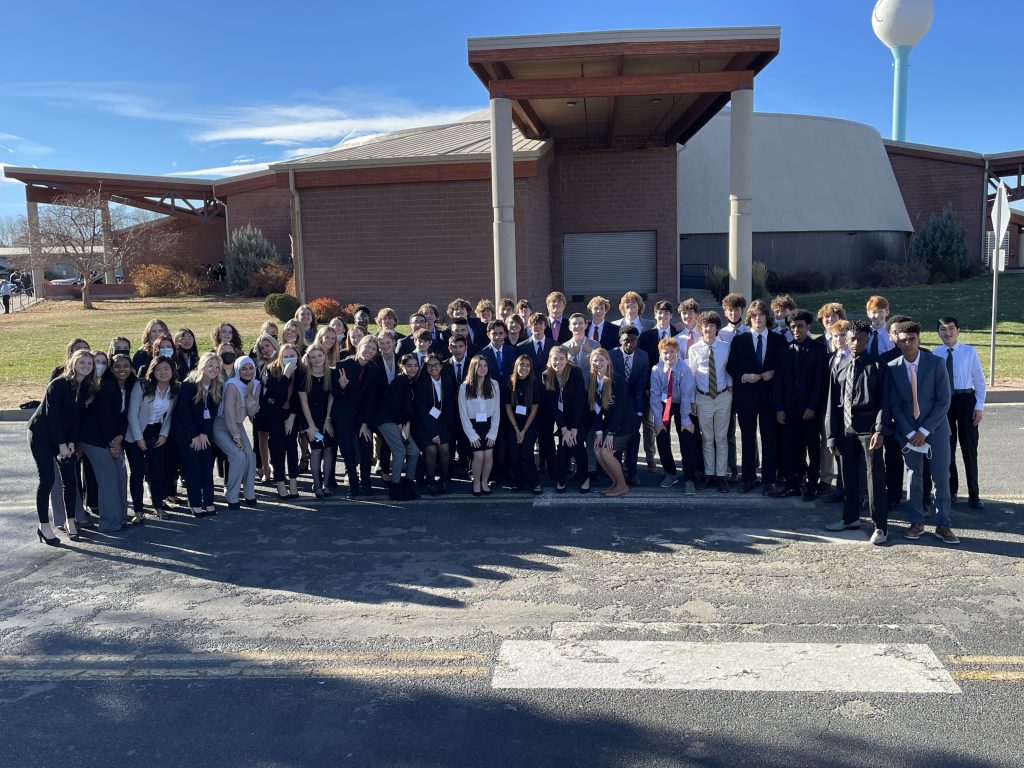 Each year, members of the Thomas Jefferson High School DECA chapter complete two role plays that emulate real-world business scenarios for competitors to offer solutions to and a 100 question multiple choice test in their subject area. The same electronic multiple choice format carried over last year, but the shift to online learning presented a new role play experience. Districts were back in-person with masks as the finishing touch to competitors’ business attire. The President of TJ DECA, Erin Pointet, reflected, “I really enjoyed being face-to-face with a judge and being able to express my ideas through human interaction instead of through a screen.”

70 TJ students with knowledge in business management and administration, finance, hospitality and tourism, or marketing were able to have the same experience with reciprocated enthusiasm. Matt Nicolo, TJ’s DECA advisor and the district judge coordinator said, “The judges were overjoyed to see the students and just to see the reactions, to see that nothing had changed, that [they] all were acting professional [and] very mature. This is something that we need[ed] in order to return to normalcy.”

Normalcy did not mean no changes were made, as District Three DECA Districts used to be held at the Johnson & Wales University Denver campus, but their ceased operations brought the competition to Riverdale Regional Park in Brighton. The scenery of lakes and parks was a picturesque change of pace and more fitting as going “from hold to prep to role play all in the same building was very nice,” said Nicolo. All of the schools in one area allowed more activities to take place, including heads or tails and Kahoot on DECA facts while competitors waited for their competitive events and the award ceremony. Determining state qualifiers introduced electronic grading this year. District Three, the district TJ’s part of, was a pilot district for this method which the judges loved that turned out to be a huge success.

TJ ultimately turned around 30 state qualifiers and two state officer candidates. Junior Kate Little, the Colorado DECA District Three State Representative and TJ DECA’s publicist, helped run opening ceremonies, the miracle minute tradition fundraiser, manned the activities, helped distribute awards, and said her piece during closing ceremonies. She included, “I am so excited to see students at TJ and students in [district three] maximize their momentum at the State setting.” To raise the motivation surrounding DECA, Pointet reflected on her final year in the program before possibly endeavoring in the business field after high school. This is not the only benefit to the program, as she has acquired skills such as being polite and being aware of body language in order to communicate with people in the best way. She added, “[These] types of things don’t necessarily only need to be mastered by people going into business but really anybody, and I think that’s the great thing about DECA is it really is for anybody.” All it takes to get involved at TJ is enrollment in one of Nicolo’s business or marketing classes.

Competitors who applied themselves to the business world this year are set to compete at State at The Broadmoor Hotel in Colorado Springs in February. Districts sparked this return to DECA as Nicolo beamed, “It warmed my heart knowing that we were able to kind of get back to what DECA represents and that is just that social connection with another human being.”