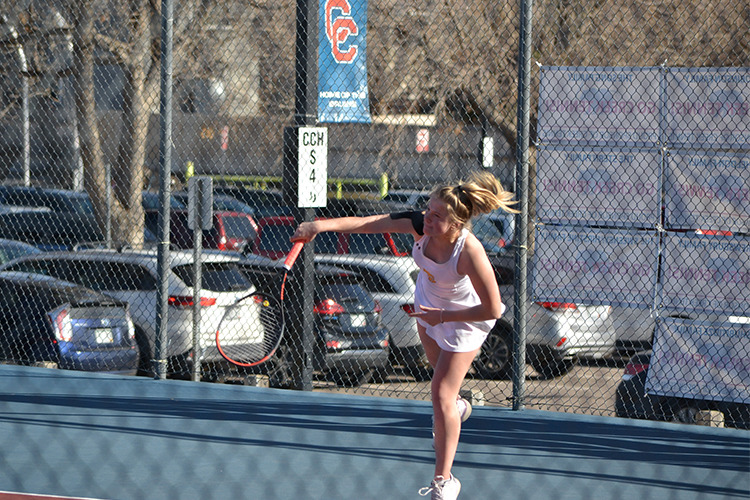 The Thomas Jefferson Girls’ tennis team is stronger than ever, and plans to go to state.

The first year back from COVID-19 for girls’ tennis has cultivated success because of the overall positive spirit of the team. Sophomore Campbell Mahoney explained, “This year’s team will be really good. Last year had its challenges with COVID-19, and it was hard to form connections with people because of masks. This year, there are a lot of people trying out and a lot of team bonding.” Luckily, tennis was a sport that did not need to take too many precautions due to the distance between players on the court, but being free from masks and the pandemic has certainly strengthened the team. In line with team bonding, freshman Kate Harper said, “I was actually kind of scared [of participating in tennis] because I thought that everyone was gonna be mean, but they’re all really nice.” The community around girls’ tennis this year has made plans for state conceivable.

The state team last year included Mahoney, Juliana Willson, Halle Stork and Stephanie Zabel. This season, Coach Skylar Magee has similar plans, “to get most of the girls to the State tournament, and help the newer tennis players to become better tennis players.” The state team most likely will be larger this year because of the new talent in the scene. Freshman AalyciaSophia Randall secured a spot as a singles three player, as well as Harper being four doubles with junior Maria Goergen. Gabriella DeMaria and Katie Schadler scored second place medals at the league tournament at South High School. The girls’ standings are 6-1 league, and 11-3 overall.

At the beginning of the season, most of the matches were riddled with wind and difficult weather. Despite this, the girls managed to practice at other facilities and secure wins. From the looks of it, plans for state will become a reality. New fundraising has helped the girls get new tennis dresses, a ball hopper, and court dividers, with more funds remaining and more fundraisers to come. A hope for a future season is to turn the weathered basketball courts on the east side of the school into new tennis courts, but until then, more fundraisers are needed in order to repair those courts.

Senior Night was April 28th, a home game against Northfield High School with prizes for the seniors who have been a part of the team since their freshman year. Seniors on the team this year are Liza Gavrilov, DeMaria, Schadler, Deqa Muse, Deborah Spinelli, Loup Povoloski, Lily Trautman, Teresa Silveira, and Coral Mendoza.

Ultimately, with a supportive team, skilled freshmen, and new tools and equipment, the girls will pave the way for success at state. Regionals were Wednesday May 4th and Thursday May 5th at Kent Denver, followed by the state tournament on May 12 and 13th. Mahoney expresses that what makes it so fun is the opportunity to “have fun and play tennis with people who are on the same level.”