Back in the Swim of Things 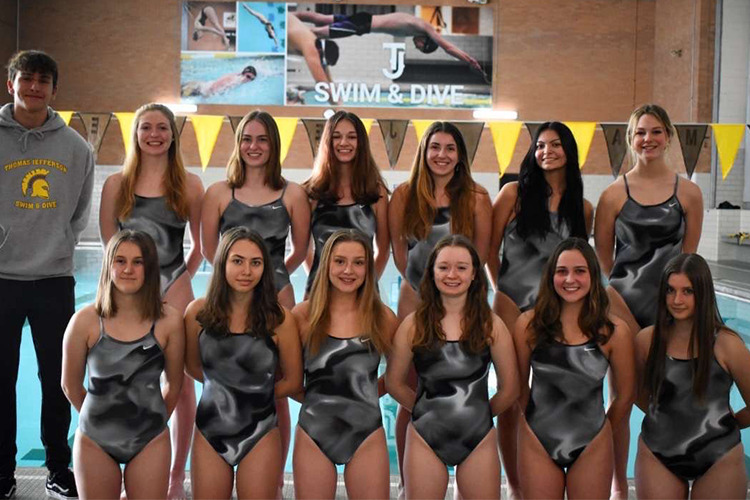 The girls’ swim and dive team had a challenging, yet fun and successful season.

The 2021-2022 girls’ swim and dive team was excited to start their season after their shortened season the previous year. Early in the season, the team was presented with their first challenge: having no spectators at meets due to COVID-19. This upsetting news did not stop the team as they were motivated to succeed in their season. Then suddenly they learned of upsetting news once again just two weeks into the season, the team’s new coach left due to personal reasons and left the girls without a replacement.

Uncertainty dominated, as the whole season was unpredictable. The team did not know their practice schedule, where they would practice, or who would be their new coach. The senior captains, Gabriella DeMaria, Avery LoJacono, Denise Hanselman, and Georgia Hartley had to step up to the plate and act as coaches for the girls on the team. They taught their teammates how to put in meet entries and came up with practice plans. Due to unforeseen circumstances, some girls quit throughout the season which made winning meets even more difficult. Although swimming is an individual sport, team points decide who wins the meet. The captains persevered and learned how to be leaders this season, and through that, they inspired the underclassmen on the team to continue swimming. The team dealt with a tremendous amount of adversity this season but through advocating for themselves they were able to learn lifelong lessons. The 2021-22 girls’ swim and dive team is a prime example of what grit and resilience look like.

As the season progressed, the dive team started practicing at George Washington High School with coach Daniel Purifoy everyday after school. The divers had an overwhelming amount of success due to their persistence at practice; sophomore Sophia Zizzo, junior Kate Jordan Little, and Hanselman qualified for A-Leagues. Little and Hanselman also qualified for state, where Little made it to the semi-finals, and Hanselman placed 4th in the eleven dives. The success did not stop there, as Hanselman also qualified for All American and broke a TJ record with a diving score of 400. Little shared, “My favorite dive memory was when Denise realized she got the All American score, she didn’t believe it, and it was exciting to see because she is such a talented athlete and is beyond capable.” The excitement the team showed for each other’s individual success shows the unconditional support that was shared throughout their season. The swim team continued their success as sophomore Emily Brown, senior Emerson Althaus, LoJacono, DeMaria, Hartley, and Little qualified for A-Leagues. LoJacono, DeMaria, Hartley, and Little qualified for state, and Althaus and Brown were alternates. The swim team qualified their 200 free relay and 200 medley relay for state, where they placed 17th in the 200 free relay at state. Individually, Little went to the Coaches Invite, as well as qualified for state for the 50, 100, and 200 free. The swimmer represented TJ as she placed 17th in the 50 free. To add to the program’s success, Hartley received the Jim Hartman award. The team was fortunate to have Coach Taylor Herney step up and coach the swim team halfway through the season, but the girls showed that they were capable of succeeding from the very beginning.

The girls on the swim and dive team “grew a lot closer” as Hanselman mentioned. The dive team went to Defy, a trampoline park, to practice their dives while having fun and exchanging laughs. The swim team was able to go to team lunches and have pasta dinners throughout the season, which helped them bond outside of the pool setting. The team gave a lot of effort during practices, but continued to put in effort in their relationships with the girls on the team even outside of practice. They became a family this season and have much to look forward to next season. Little added, “I cannot wait to get back in the pool and spend every day after school with my best friends again.”