Back to the Diamond 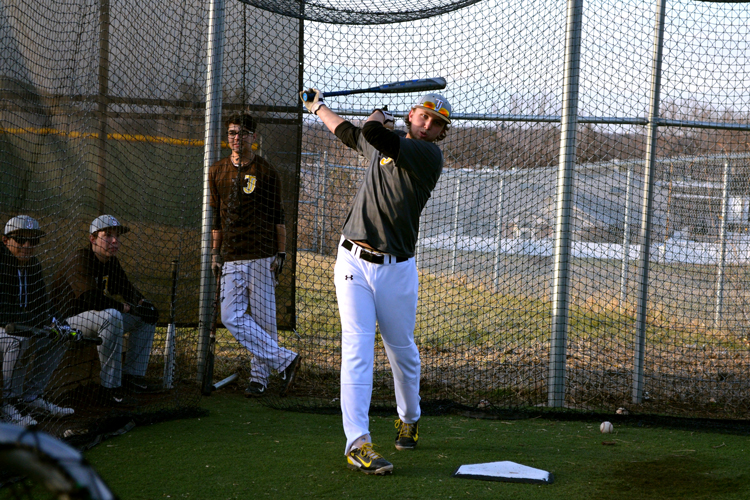 TJ Baseball looks to make a run in the State playoffs in the upcoming season.

With Spring quickly approaching, the excitement and anticipation for TJ baseball is heating up. After months of offseason workouts, tryouts were held on February 29th, soon to be followed by the team’s first game on March 12th at Far Northeast High School. Head Coach Al Bleser will be entering his sixth year with the program, and his second year as head coach.

After a 9-10 season and just barely missing the playoffs last year, TJ’s young baseball team gained a significant amount of experience and learned many valuable lessons; however, as with any team, they still have things to focus on. “We have to do a better job of finishing games,” explained senior Chase Remme. The Spartans held a lead in nearly every single game they played last season, but struggled to close out games. “We seemed to lose focus as the game went on, and that cost us big time,” Remme continued. The team will use these lessons from last year in order to become a better team. One of the focal points for the upcoming season will be to play hard for the entire seven innings, not just the first five. “We have to be completely engaged until we get the final out of the game,” said fellow senior Eli Webb.

For the upcoming season, the Spartans offer a very experienced roster with eleven players returning from last year.  Seniors Jon Dar, Nathan Waterhouse, Brandon Merrell, Jonny Sundeen, Seve Rogers, Webb, and Remme are in their final year of the program. Dylan Van Sky, Jesse Axelrad, Patrick McDuffie, and Trystan Kimmel are all returning for their junior year. This left ten roster spots open which were determined at tryouts on February 29th and will be filled by the following: seniors Keith Joyner, Henry Allen, Javontae Jourdain, Jack Willson, and Brandon Baum, juniors Brandon Pierts and David Lopez, sophomores Jacob Eivins, Conner Side, and Johnny Schweyer, and freshman Nick Bowermaster. These players worked hard in the offseason in preparation for the season and are ready for the varsity level. “We’ve been working every Tuesday, Wednesday, and Thursday during the winter as well as Saturdays down in Parker,” said Allen. “These workouts are crucial because it allows us to stay fresh and to avoid feeling rusty at the beginning of the season,” he added. All the hard work that the boys have put in over the past few months figure to work wonders as the season begins.

The Spartans will boast a solid pitching rotation that includes Kimmel, Dar, Waterhouse McDuffie, Eivins, Schweyer, Sundeen, Allen, Side, and Remme. These boys all pitched last year and gained valuable experience. “Last year was very valuable to me because it will allow me to adjust to the speed of the game better this year,” commented Waterhouse. “Now I am aware of how the game is played and I’ll be ready to go by the first inning of the season.” The infielders include Joyner, Lopez, Webb, Merrell, Rogers, Eivins, Schweyer, Dar, Sundeen, McDuffie, and Kimmel. “As the shortstop, it’s my job to be a leader out there and make sure everyone knows what’s going on,” explained Rogers. The infield will be looking to improve on their fielding this year, as they believe they committed too many errors. “I think that the work we did in the offseason will help us big time when it comes to fielding,” said third baseman Webb. Making up the outfield will be Jourdain, Willson, Baum, Axelrad, Allen, Side, Waterhouse, and Remme. These guys hope to improve on their chemistry and communication in the upcoming season. “Communication between outfielders is key,” commented Willson. “It’s very important that we are all on the same page and making sure we get to fly balls as quickly as possible.” Behind the plate doing the dirty work will be catchers Van Sky and Pierts. Van Sky learned a lot backing up David Peterson last year and is ready to take charge of the backstop.

The Spartans present a solid roster for the upcoming season and will be in heavy competition to win the Denver Public League. They will play each DPS team twice, all of which present different challenges. “I’m optimistic about this season,” said Sundeen. “We worked hard in the offseason and it will pay its dividends.” The players have been practicing hard and are ready to bring the baseball legacy back to TJ.