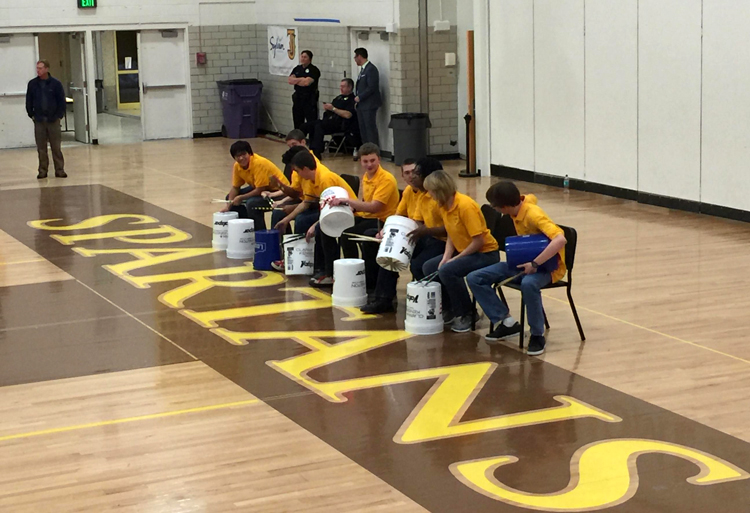 The drumline entertains during halftime. photo by Javontae Jordain

The TJ drumline wows the crowd at halftime with their impressive rhythm.

As the school year progresses, Thomas Jefferson’s extra curricular programs continue to display their hard work for the students enjoyment. During the boys’ basketball game on January 4th, against Westminster High School, TJ’s drumline did just that, bringing the audience musical enjoyment in an unconventional way: by using buckets.

After months of much practice, the drumline, led by band teacher Robin Johnson, was ready to perform a few songs as a halftime show. In preparation for events like this, “Students work on rudiments (rhythmic patterns), interpreting written music, as well as improvising and arranging their own music,” explained Johnson. For this performance, the group members showed off their drumming skills by hammering out some incredible songs on their ten gallon buckets.

The drumline consists of ten student volunteers who performed songs that they collectively picked, displaying amazing creativity by playing songs that were made specifically for buckets. Johnson credits some of the performance’s success to others who have done similar performances. “When considering music for basketball games, I proposed bucket songs for half-time, as a novelty, following in the tradition of groups like Stomp,” explained Johnson. “Once a repertoire is developed, the students select which pieces they feel are most polished and appropriate for the occasion,” she added. The drumline has successfully displayed TJ’s creative talent and has provided a different experience for basketball fans than the normal drum sets that are usually played.

As the students performed, they showed off their amazing rhythm and their ability to stay in sync as a group while playing intricate songs. Each member of the drumline  relied on each other to learn and play their parts correctly, and the teamwork resulted in clear success, as the fans at the game especially enjoyed the performance. “It was something new and refreshing that I haven’t seen at the school before,” said senior Adoneyase Mehari, “It makes me excited for other games and performances.”

This was the drum line’s first time time performing for an audience, and it will certainly not be their last. They are planning on performing at pep-rallies and upcoming halftime games in the future, so fans should be on the lookout for more creative bucket performances.