Big Z Steppin’ It Up 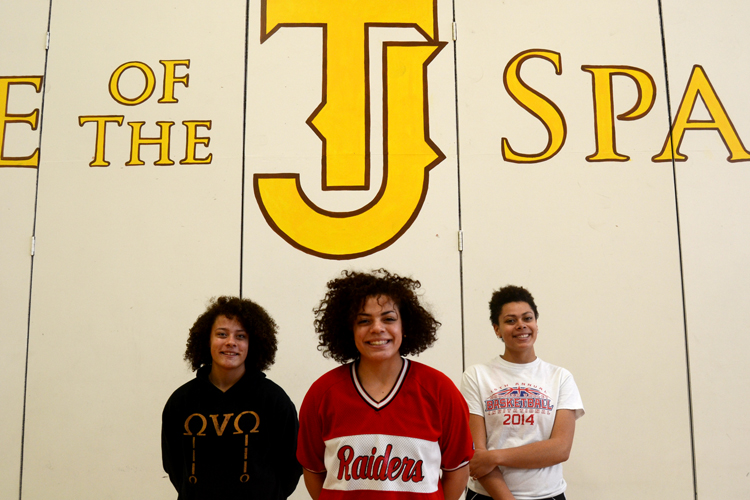 The Robbins trio brings much talent and excitement to the TJ community (L-R: Daija, Zoya, Armani). photo by Adna Adrovic

Zoya Robbins is a triple impact player, in the classroom, on the field and on the court.

Sophomore Zoya Robbins is known around TJ as a young student athlete who excels in the classroom as well as on the field and the court. She stays engaged with school activities because of her role in leadership class and DECA. Before meeting her, many people can already tell she’s someone who is just a joy to be around. Through her sports and school work, she works very hard to reach her goals and succeed.

As people meet Zoya, they can find out that she is a laid back person who likes to do ‘girl stuff.’ “I like to chill, I like to go to the movies, I like to shop, and I like to be around friends and family,” said Zoya. Every time she has a chance to do these activities, she enjoys them to the fullest, because usually she is a very busy person in her athletic world.

Before coming into high school, Zoya’s talent was shown through her softball skills. Athletic director Andrew Skari pointed out, “You can watch her as an 8th grader playing softball and know that she was going to be an impactful athlete.” As a pitcher, she has a lot of weight on her shoulders to do well for the good of the team, but this only makes Zoya work harder to achieve what she wants. During the past season of softball she had a total of 86 strikeouts, 9 home runs and a .906 fielding percentage. Her pitching has become that much better over the years because even during basketball season she does her weekly pitching lessons. Zoya stated “My favorite is softball because we put so much training and money towards it and being on the field is where I belong.” She hopes to receive a college scholarship for softball to Fort Hays State or Metro State.

Although Zoya is a key player for softball, she is also becoming well known for the skills that she demonstrates on the basketball court. As a freshman, she earned a starting spot after two players had season ending injuries. She proved that she deserved one of those spots and stepped up. She averaged 14 points and 10 rebounds per game, almost stacking a double double every game (a double double in basketball is earning 10 or more points in two statistical categories). As a freshman, she has already presented her leadership skills and it showed through the way she played.

Coming into freshman year, Zoya already had her sister, senior Armani Robbins, playing for the varsity team. Last year, it took them a while to get used to playing together, but once little Robbins was comfortable playing with big Robbins, they already knew they were going to click easily. “We have this chemistry, since we’ve been playing together. We know how both of us play so, it’s way easier to play on the court because we know where each of us are going,” explained Armani. Armani feels like she has had a major contribution to her sister’s success because, “I’m a shooter and she’s a post player, so whenever I’m getting defended I look on the court and I can see her. I’ll give her the ball for her to get her points, and she rebounds and puts back my missed shots.” So far this year, Zoya averages a remarkable 15.5 points and about 10 rebounds per game. Some nights are harder than others, as every athlete knows, but no matter what kind of adversity is shown, she is able to adapt to it and make an impact. Zoya believes that playing with her sister has helped not only their relationship but also the player she is today. “We just have certain memories on and off the basketball court, and most of the ones that are on the court are better memories so it’s just a cool experience,” said Zoya.

However, the sister duo doesn’t end there. This year, they had a chance to welcome their youngest sister Daija to all the fun. Daija made junior varsity (JV) where she dominates on the court and she suits up every varsity game. She is motivated by the success of both of her sisters. “It makes me eager to go on the court with them, like all three of us on the court at the same time, because I feel like we would just work together,” described Daija.

As if Zoya’s accomplishments of winning player of the game a couple of times isn’t enough, she was featured in an article this winter on Maxpreps as one of the top sophomores in Colorado for basketball. The website Maxpreps is a sports central for high school athletes, where people can keep up with individual stats as well as teams stats. This is a major accomplishment for Zoya, but she doesn’t like to take all the credit for it. “I think it’s the team that’s built around me that’s made me the player that I am today. I’m as good as I am right now because of the people around me,” stated Zoya. Coach Damion Allen believes that it’s nice to have someone as talented as Zoya. “It is great to have her and probably would be pretty tough to play against, but I’m just glad she’s on our side,” said Allen.

Besides all of her accomplishments on the court and the field, Zoya also has an impact on the whole school. She is a part of the leadership class that puts together exciting activities for the school as well as helps around the community. She is also part of DECA as mentioned above, where she has earned an officer position, and is attending the State competition at the end of February. In the past semester, dealing with softball and beginning basketball season, Zoya was able to hold up a 3.5 GPA. She owes it to both of her parents for always being there to help her be a student athlete. In school, her two favorite classes are Spanish and AP Environmental Science. “I like Spanish because my softball coach is the teacher, and I also like AP Environmental Science, because Mr. Butera is a really good teacher,” stated Zoya.

In less than two years, Zoya has already accomplished so much in the athletic and academic world. In her next two years at TJ, there is no doubt that she will achieve even greater things.