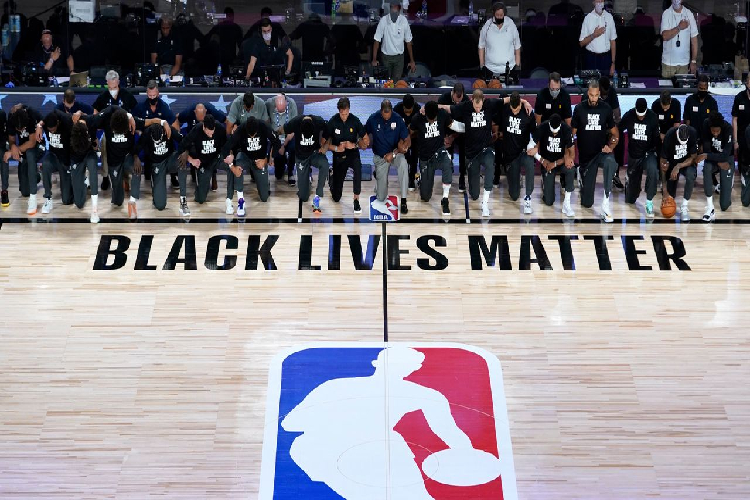 NBA players and coaches kneel during the national anthem with their Black Lives Matter Shirts on the BLM court. photo by Ashley Landis, The Associated Press

Athletes of all different sports all over the world have joined the Black Lives Matter movement to fight injustice.

Seven years ago, on July 13th, the Black Lives Matter (BLM) was founded by Alicia Garza, Patrisse Cullors, and Opal Tometi. There have been countless protests, rallies, and social events organized by BLM, which also has a huge social media presence. In the past few months, there have been calls for racial justice following the murder of George Floyd on May 25th. People all over the world are protesting and demanding justice for the countless people of color who have been murdered because of the white supremacy and systemic racism that has allowed justice to not take place. Athletes have asked themselves what they could do to show their support for BLM. Many sports leagues, like the National Basketball Association and Major League Baseball, have helped their athletes support BLM. Although having a supportive sports league makes protesting easier, many athletes’ careers ended because of their protests. For instance, Colin Kapernick, former National Football League quarterback, was fired for kneeling during the national anthem. Teams are now standing together to advocate for change through different acts that draw the public’s attention.

Many national sports teams have created their own way of standing with BLM. All the teams can show their support in many ways, whether it is wearing jerseys with “Black Lives Matter” or the specific names of the black people murdered inhumanely as a result of police brutality. Jamal Murray, a professional basketball player for the Denver Nuggets, had his basketball shoes custom painted with Breonna Taylor’s and George Floyd’s faces. This is just one example of the multiple athletes who have taken part in showing their support. Sports ranging from baseball, soccer, basketball, tennis, football, track, hockey, cricket, rugby, NASCAR, and surfing are choosing not to stay silent in this time of change and division in the United States. Postponing games, incorporating BLM on jerseys and equipment, and taking a knee before games are the general acts that sports have been taking to advocate for BLM. The National Football League (NFL) had phrases such as “End Racism” and “It Takes All of Us” in their end zones and played the hymn “Lift Every Voice and Sing,” which is known as the Black National Anthem, before games. It is important to hold police officers accountable when they do not uphold their promises to the American people to “serve and protect.” Through these acts of support, professional sports teams are helping to bring positive change.

Players have also been using their voices in interviews to show their support and to share their opinions. In an interview with Jaylen Brown, a professional basketball player for the Boston Celtics, Brown stated, “To be honest I wasn’t surprised… Till we dismantle, recreate, or change this system that we have, it’s gonna continue to have victims like Breonna Taylor and others that fall victim to oppression.” Brown is not alone; there are endless players who call for change. Many athletes have been impacted by the injustice seen in the country right now. On the United States Women’s National Team, Casey Short and Julie Ertz knelt during the national anthem and sobbed as they held each other. Many athletes, especially black athletes, have mentioned to the public that they are people before they are players. Natasha Cloud, a professional basketball player for the Washington Mystics, decided to sit out of the 2020 Women’s National Basketball Association (WNBA) season. She has said on her Instagram that this was the toughest choice she had ever had to make. Cloud commented, “I am more than an athlete. I have a responsibility to myself, to my community, and to my future children to fight for something that is much bigger than myself and the game of basketball. I will instead, continue the fight on the front lines for social reform, because until black lives matter, all lives can’t matter.” This powerful message from Cloud, reminds people of change that needs to be done and how badly people want to see justice and reform in the United States.

Sometimes people forget that athletes are humans, too. It is dangerous to separate sports and skin color. Outside of the gym, court, or field, black athletes experience the same discrimination and opression of an ordinary individual. Sports players have taken the responsibility to show up for the BLM movement and use their platforms to advocate for change and reform. Their support and protests for BLM have not gone unnoticed and will put pressure on local and federal governments to create the reform needed. It is important that other citizens take the example of athletes and continue to protest for change and reform.