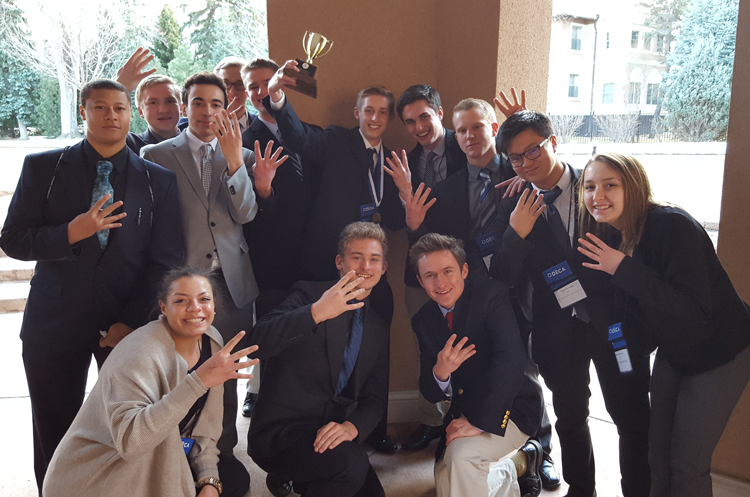 After endless hours of preparation, fourteen Spartans competed in the 2016 DECA State Conference.

Distributive Education Clubs of America (DECA) is an organization that has been around for nearly 70 years, preparing students for college and career-readiness by allowing them to experience the work force. Members gain this knowledge by being exposed to elements like public speaking and thinking under pressure. Fourteen TJ students spent many hours studying, role-playing, and preparing themselves for the State Conference, which was held on February 20-23, at the Broadmoor Hotel in Colorado Springs.

The following Spartans competed in the State competition: seniors Henry Allen, Evan Anderson, Brandon Griffith, Rebecca Gubrud, Yohanes Limasalle, Jonny Sundeen, Dane VanderMiller, and Jack Willson, juniors Ilan Eshkenazi, Brandon Pietrs, and Nick Wilson, and sophomores Zoya Robbins, Valyntine Lonergan, and Kayne Walton. All of these students were first-time attendees, except for Eshkenazi, who qualified for Food Marketing in 2014. Most of the State competitors were not intimidated by the competition; rather, they felt that the most important thing to them was not the competition, but the experience. “Nicolo has taught me if we put our minds to it, we can accomplish anything so I’m just looking forward to a fun experience,” said Griffith prior to the conference.

At the State Conference, DECA members faced even more competitors within the same category and larger judging panels. “The students of Thomas Jefferson represented our school and district with pride and professionalism,” stated DECA instructor Matt Nicolo. Each student competed in their own event to try and qualify for the ICDC (International Career Development Conference) that will be held in Nashville, Tennessee from April 23-26. Only the top qualifier from each section moved on to the finals. Sundeen was the only TJ Spartan who qualified for the finals, finishing 4th in the State for his event of Principles of Business Management and Administration. Sundeen will have the option of attending ICDC, where there will be 15,000 students from around the globe. Additionally, Pietrs received a medal in his category for Honorable Mention in Business Services Marketing.

Nicolo has been the driving force behind DECA’s success, preparing each of his members with the materials they might need. Nicolo has been a dedicated instructor for the past 14 years, and encourages his students not only to compete but to remember what they have learned and to apply it to their own lives. “We don’t measure ourselves with how many go and win, we really are all about the experience and giving students important life skills they can use after high school,” he explained.

After competition, students were able to celebrate their success by attending a dance that was held at the Broadmoor. A few thousand students from all around the state celebrated at the dance and were also treated to dinner at one of the Broadmoor’s five star restaurants and were able to speak with kids from other schools while enjoying excellent dessert.

TJ’s DECA members endlessly prepared for competition throughout the year, and their hard work was undoubtedly revealed at the State Conference. The DECA community is proud of this year’s accomplishments, and they look forward to even more to come.