Boys Golf’s Season Was a ParTee 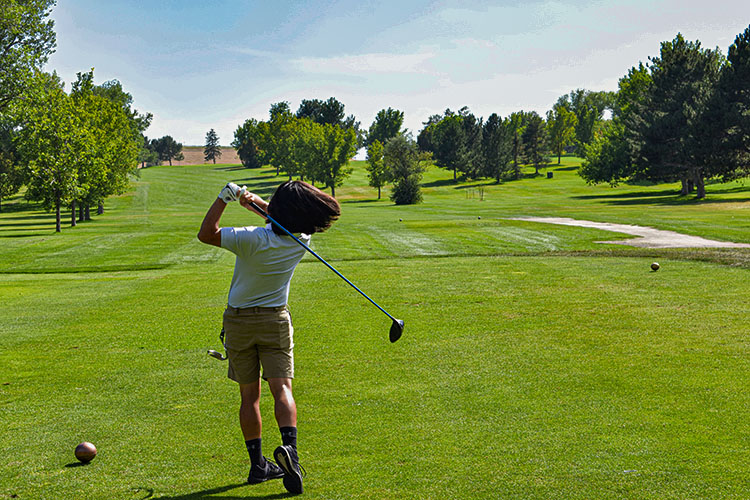 Senior Eddie Aldridge's practice paid off as he advanced to regionals. photo by Aidan Byford

The 2019 TJ Boys Golf team had a great year with four Spartans going to regionals and one making it to state.

It was a very eventful year for the Thomas Jefferson High School boys golf team, led by coaches Mark Smith and Stacey Fornstrom. The team practiced four times a week at Kennedy Golf Course just a few miles east from TJ down Hampden. With the coaches there, the team has many options for daily practices. The team starts with putting and chipping, then moves the practice to any of the three nine-hole courses, the par three, or spend a day at the range. All of these variants help prepare the team for various tournaments against other DPS high schools. The schools that the Spartan Golfers play against include South, East, George Washington, North, and Northfield. Out of all of those schools, the varsity athletes are the top four for each school, making it a very competitive sport.

The season ended for a majority of the team on September 19th as there are no more tournaments scheduled for non-varsity players. It was an amazing season for the JV Spartans as well; from the beginning of the season, the team made lots of progress. “Everyone’s scores improved throughout the year, we had a state qualifier in Connor Duris, it seemed like everybody did improve and had a better idea of how to play golf and things to work on in the future,” said Fornstrom. He noticed a great deal of hard work that paid off. It was a great season that prepared the team for an even stronger year in 2020. Overall, it was a great year with all Spartans making their golf game better in one way or another.

The top four spots for the DPS teams were able to compete on September 25th at Overland Golf Course in order to go to state. One of the competitors was junior Parker Boyd. He was just three strokes shy of making it to state. He said: “I think I built it up in my head, and I got nervous. I couldn’t handle the pressure.” However, Boyd thinks his senior year will be a year to remember as he explained some of the steps he is going to take to prepare for next year. For example, he plans on ramping up his pre-season practice. Sadly, out of the four varsity players, seniors Declan Larm and Eddie Aldridge, junior Parker Boyd, and sophomore Connor Duris, the only Spartan to make state this year was Duris. He competed at state October 6th-8th at Bridges Golf & Country Club in Montrose, Colorado. Duris noted: “When I found out I was going to state I was excited, it was just kind of like revenge from last year because I was right on the cutline, but then this year I made it by a landslide, so it was kind of a relief.” Duris ended up tying for 45th place at state, which is an enormous feat, due to the difficulty of the course he played at state. Only a sophomore, he still has two bright seasons in the future. Thomas Jefferson High School cannot wait to see what the team will accomplish in the 2020 school year.