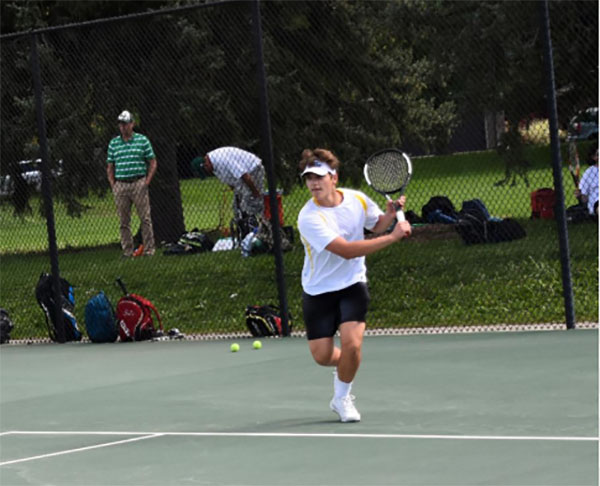 The 2019 TJ Boys Tennis team had an eventful year and competed at a very high level.

The boys’ tennis team for Thomas Jefferson High School had a wild season, to say the least.  With a great deal of adversity working against the team this year, the boys faced a significant amount of pressure while competing and practicing.  Despite this, the group battled through adversity and ended up having a successful summer/fall season. Despite the team only winning three meets this year, they won nearly half of the matches within those meets.  This showcases the intense battles the team had this year during their meets, and the fight they showed during competition.

Unfortunately, former head coach Jeff Zinke was unable to finish the season. Former JV coach Skyler Magee stepped up and guided the varsity team in Zinke’s absence.  With only one coach to oversee an entire roster of both JV and Varsity players, the team was in need of an adult to step up and help the team. Luckily for TJ, one of our very own Spartan teachers assumed the role.  Photography teacher William Forrester heard of the team’s crisis and offered his assistance as a coach for the remainder of the year.  When asked why he decided to step in, Forrester responded, “It seemed like something I could do for the TJ community that was helpful for everyone.”  Who knows where the team would have been without the assistance of Coach Forrester? Although his act of kindness was a great help, there were still challenges that came with having a coaching alteration halfway through the year.  Forrester commented on these challenges by saying, “There were some challenges because there is a certain culture set by the previous coach and I had to come in and do what I could. It’s not the ideal situation, but we did the best we could.”  Forrester had a great time coaching the team and when asked about returning next year he says he is “highly considering it.”

At the end of the year the entire Varsity boys’ tennis team had the opportunity to compete at regionals and see if anyone had the ability to qualify for state.  The team’s region for this competition consisted of Kent Denver, Alameda, Denver North, Discovery Canyon, Green Mountain, and  Palmer Ridge. This was one of the most competitive groups at regionals, with schools such as Kent Denver and Palmer Ridge that have tended to be dominant in years past.  The team played their hearts out, but sadly did not get the results they wanted. Singles two player, junior, Alex Trujillo, gave a recap of the regionals experience for the team. “Our singles, as hard as we played, unfortunately didn’t place. Our number one doubles, junior, Jason Hetzel and, senior, John Greenman, did place third at regionals which was a great moment for them.”

The year for boys’ tennis here at TJ was certainly eventful.  The team was able to turn their bad luck around and continue to compete at a very high level this year, earning the respect all who watched their journey.  The future is bright for the TJ boys’ tennis team.