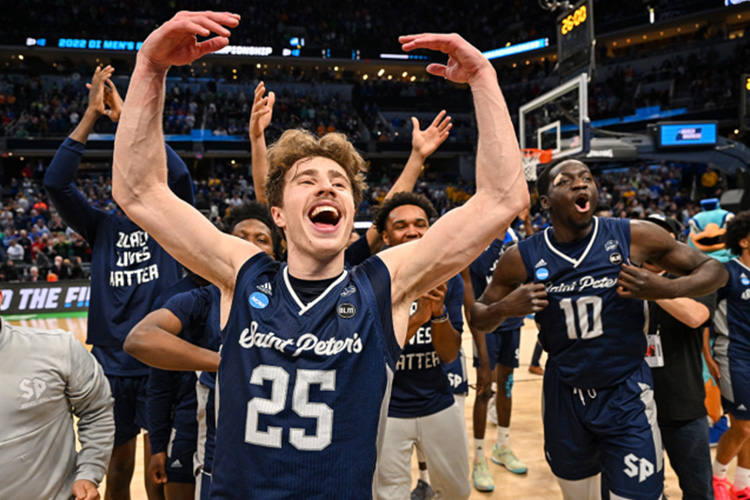 Doug Edert and Saint Peter’s excitement after being the first 15 seeded team to reach the elite 8. photo by Jamie Sabau

A review of March Madness this year and how crazy March can get.

Ever since 1939, March Madness has shocked fans and top teams every year making it virtually impossible to try to predict who wins every single year. All of the best 68 teams play in March to really settle who is the best college basketball team in the country and write themselves into the story filled legend that is March Madness. The entirety of the month can have you screaming at the top of your lungs and watching the team you picked as you watch them hit a game winning buzzer beater. Then, five minutes later you’ll be crying because the team you picked to win the championship lost in the first round and you are left thinking, “Why does this happen every single year?”

The amount of upsets that happen every year creates an impossible way to create a perfect bracket, but the main idea around March Madness comes from the atmosphere and the build up to this point year in and year out. It creates powerhouses and unlikely players that nobody has ever heard of become heroes which always creates an underdog to be as good as their college has ever been, including the 15th seed, Florida Gulf Coast, in their Sweet 16 run in 2013, 16 seeded University of Maryland Baltimore Country upsetting top seeded Virginia back in 2018, and Oral Roberts upsetting 2nd seed Ohio State and advancing to the sweet 16 just last year. Many of these low major colleges get the biggest stage in college basketball to prove why they can beat these major schools, and they showed up especially with this year’s 2022 bracket.

This year’s bracket was full of rivalries, shocking upsets and yet another second seed falling for the third time in history. To start, in one of many brackets Kentucky was picked to win the tournament and was quickly defeated by 15th seed Saint Peter’s University in the first round. In the west region, the number one seed, Gonzaga, in the tournament was knocked out in the Sweet 16 by Arkansas, which ended up making an unexpected run to the Elite 8 and lost to the Duke Blue Devils, who advanced all the way to the Final Four. The west seemed like a typical region with a second seed advancing because the East Region did not disappoint. To start with, Saint Peter’s made an all time run as the first 15 seeded team to reach the Elite Eight and it was unreal to watch. As much as many wanted their picks to be right, it’s hard to not want to root for an underdog so it was unreal to watch but they did come up short due to the North Carolina Tar Heels. Although the Tar Heels were unusually an eighth seed this year, they were one incredibly dynamic team as an offense and upset the defending national champions in just the second round and in the Sweet 16 defeated UCLA. People haven’t seen this crazy of a region in a while. Moving on to the South Region, Michigan made a slight run with upsets against Colorado State and third seed Tennessee. However, after an early upset by Houston against Arizona created a great opportunity for Villanova who ended up making the Final Four. In the Midwest region, Miami made an unexpected run into the Elite Eight by beating Auburn in the second round and also  the Iowa State upset against the Wisconsin Badgers in the second round as well. Kansas ran through the Midwest and also advanced to the Final Four.

This year these four teams squared off in New Orleans and ended up creating a matchup that had fans thinking they would never watch. Duke and North Carolina squared off for the first time in history in March Madness and  the winner played for the National Championship and it did not disappoint. The game stayed close the entire game, but in the last minutes of the game North Carolina ended up with the upset that ended Duke’s Coach K’s coaching career which makes this Final Four even more important. In the other game, Kansas versus Villinova, this game turned into a blowout 10 minutes into the game. The lead was countered by a scoring run in the beginning of the second half, but it just wasn’t enough to beat the Jayhawks. This had set the stage for the 2022 National Championship between North Carolina and Kansas.

For the first half, Kansas started out firing which UNC quickly quieted down and went on a massive 18-2 run to end the first half to put them up 15 points to start the second half. However, the script seemed to flip for both teams. North Carolina started off cold to start the second half which gave Kansas a chance to take the lead back halfway through the second half. All of the momentum of the game had switched, but it began to even out up until 22 seconds left when David Mccormack gave Kansas a three point lead and after both teams turned the ball over with four seconds left. It gave UNC the chance to tie the game and send it to overtime but Caleb Love couldn’t connect which made Kansas the winner of March Madness and all of College Basketball. It was a great run by this Kansas team which was a little bit of a surprise to me. Overall, this was a tremendous year for March Madness that created talks that the basketball world will talk about for forever.