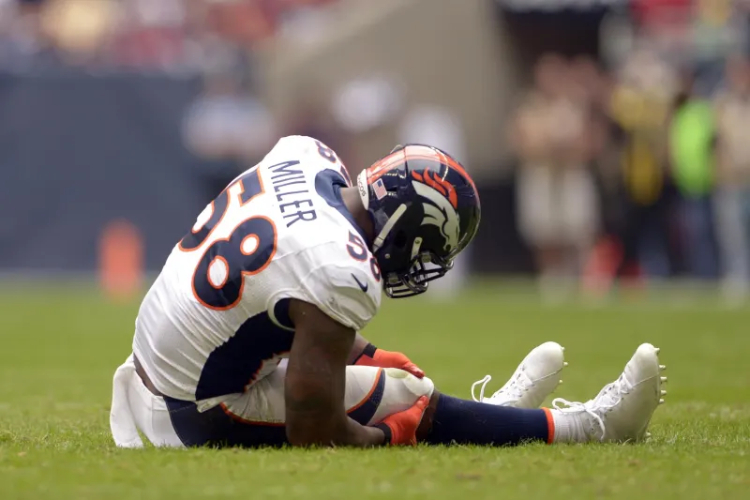 The Denver Broncos are having some difficulties this year due to numerous players’ injuries.

It is no secret that the Broncos are having a hard year. Along with the several injured players, they are three and five as of Sunday, November 8th, when they lost to the Atlanta Falcons. Bronco fans are frustrated watching games without major players while losing lots of games. The Broncos have a point average of 20.0 per game with a strong defense keeping their opponents at a point average of 18.3 per game. Unfortunately, their averages haven’t been reflected in their scores this season. On Sunday the 25th of October, during a cold and snowy Denver day, over twelve players were hurt. It is halfway through the season; the tenth game is on Sunday November 15th against the Las Vegas Raiders.

The Broncos have lost their major linebacker, Von Miller, because of an ankle injury. He was injured in the last practice before the first game. He is expected to return to the game in week fifteen, possibly in the game against the Buffalo Bills. He is not the only injured player who is a big resource for the Denver Broncos. Recently, Tim Partrick (wide receiver), Diontae Spencer (wide receiver), Mike Purcell (nose tackle), Jeremiah Attaochu (outer linebacker), and Phillip Lindsey (running back) were either out or questionable for the game on Sunday the 1st of November against the Chargers. Lucky the Broncos were able to pull together and beat the Chargers 31 – 30.  Based on their statistics, the most valuable Bronco players out for the season are Jurrell Casey (defensive end) and Courtland Sutton (wide receiver).

Head Coach Vic Fangio is relatively new to the Broncos. This is his second season with the Broncos, and during an interview he made a statement after their loss against the Chiefs on Sunday. Fangio said, “We just gotta keep fighting through it, and keep getting better… be a little better on third down.” Fangio made it clear that they needed to get better at completing the play and getting through the difficult losses. He is motivated to get his team back on track. Along with him, quarterback Drew Lock agrees that more practice is needed to improve their team, especially offensively. Fangio also added how the Broncos will cope with the injury of punt return specialist, Diontae Spencer. He noted that it’s a team effort. However, he mentioned some players who really stepped up during this time. Fangio believes wide receivers Bryce Callahan, Tyrie Cleveland, and Tim Patrick have made big plays despite all of these injuries. With a large hole in their defensive line up, Fangio said, “The back would be questionable… but everyone else should be ready to go.” Fangio is confident that his team has the resources and the players to advance and to be greater than they have been.

Although the Broncos are having trouble with their starting lineup now with injuries on both the offensive and the defensive fronts, luckily most of the injured players returned by week nine for the game against the Atlanta Falcons. In the meantime, the team and Fangio feel that once the team is back and working hard in practice, their season will take a turn for the best.