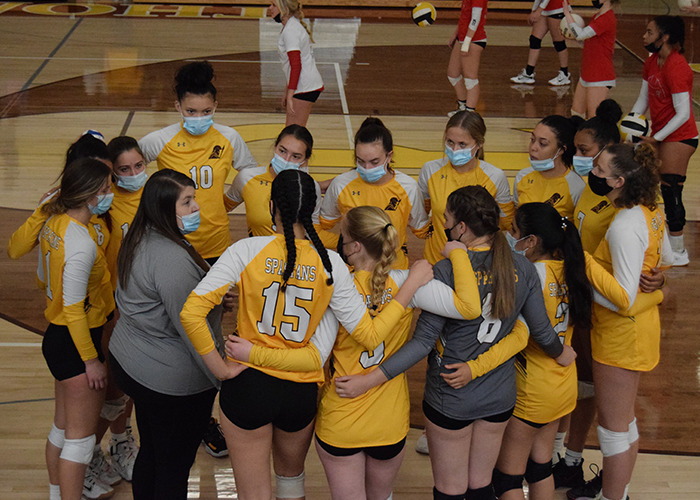 The girls volleyball program at TJ has been flourishing thanks to the new head coach, Denny Bryan.

With a winning record of 18-7, the varsity volleyball team has been killing it this year. They have rebounded extremely well from the COVID-19 season, and much of it is thanks to the new head coach, Denny Bryan.

Athletic Director Anne Rice hired Bryan last year after the previous head coach left the program. Bryan was the coach for multiple levels many years prior, making Rice believe that she would be a great fit for the head coach position when the spot opened up. Bryan’s “positive attitude and her willingness to learn” made her stand out, said Rice. Bryan’s first year coaching at TJ was last year, during the COVID-19 season, and despite the challenges, Bryan was able to make the transition from one head coach to another go very smoothly. “She’s done a really great job navigating through the learning curves that came with COVID-19,” Rice said. Bryan’s ability to overcome the challenges of COVID-19 and inspire the volleyball team to keep learning and improving for the next season had a clear impact on not only the girls, but also the program as a whole.

One of the seniors, Shannon Graham, plays libero for the varsity team. Over the four years that she has played volleyball at TJ, she has seen how each head coach brings a different perspective to the team. Graham shared that Bryan’s approach to coaching emphasizes the importance of forming personal connections with the players and that “she’s like a parent,”  and anyone on the team “can go to her about anything.” There is a reason that the volleyball team has won 18 games this year, and it is not only because of the skills the players have. As a result of Bryan’s approach to coaching and her belief in the importance of player connection, the players have been able to bond and become more of a team, which has positively impacted their performance as it’s off the charts. In fact, Graham’s favorite thing about playing volleyball at TJ is that the team is her second family. TJ’s volleyball players spend around 15-20 hours a week playing together, so the connection between teammates is one of the most important aspects of volleyball, which Bryan helps to bring out. She continuously encourages team bonding and puts effort into making everyone on the team feel wanted and included.

Like many of the girls on her team, Bryan has been playing volleyball for a long time. She played competitively for around seven years before college. Though Bryan received college scholarship offers, she turned them all down in order to start coaching her freshman year. She was inspired to become a coach because of her coaches. Bryan shares,“I had some of the best coaches in the state of Colorado [and that] what they gave versus the little they got really hit home for me because I was one of those kids that didn’t have a lot of money or opportunities, and they got me to the level of being able to play in college.” Bryan wishes to do the same for her athletes, regardless of their financial situation. One of her biggest goals is creating “an environment with a competitive arena while maintaining the comradery between the girls,” and Graham shares that she has upheld her vow as they have “bonded a lot better and become more of a team since she started coaching.” Bryan’s ability to instill comradery in the girls has been one of the many reasons why the volleyball program is flourishing. Her experiences with her coaches and playing on competitive yet friendly teams have allowed her to give the Spartans a new perspective on how to work and play well with each other.

Despite the challenges that come with coaching during COVID-19, Bryan has taken the program by storm and remains unafraid to make the necessary changes. Her determination to give the girls a better chance at playing in college or simply becoming better people has inspired those around her and will continue to do so for the rest of her coaching career.

Head Coach Denny Bryan instills confidence in her players during a time-out. photo by Shana Saint-Phard