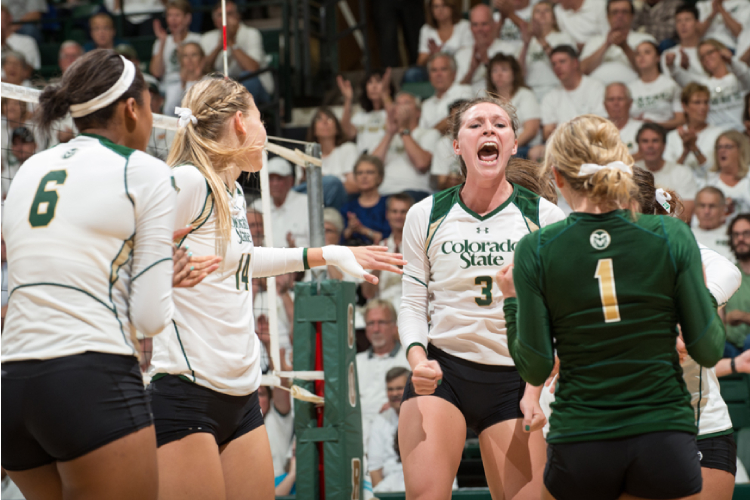 Despite the major differences between club and high school volleyball, neither of the sport’s formats have been immune to the major changes caused by COVID-19.

Volleyball started in Holyoke, Massachusetts at a YMCA gymnasium where it was invented in 1895. Volleyball is now one of the five largest international sports; with 220 affiliated national teams, it is the largest international sporting federation in the world. William G. Morgan has gone down as the inventor of the game of volleyball, which he originally gave the name “Mintonette.”

Club volleyball has a longer season than high school volleyball. With two or three practices a week and then tournaments every other Sunday, club volleyball is a nearly year-round commitment that can last until late May into June if your team goes to Nationals at the end of season. Many clubs have three to four levels for each age group. For example, 303 Volleyball Club, which many Thomas Jefferson volleyball players have played for, has four levels for all age groups. The two top teams would travel two to five times per season. Senior Leah Burke stated, “My favorite part of club volleyball was the traveling portion. I not only created amazing bonds with the other girls on the team, but we got to do this while visiting places all over the country. I gained independence and confidence doing this.”

High school volleyball is during the fall season and only lasts about two to three months, making this a much faster pace between games and practices. Tryouts usually happen the first or second week in August before school starts, and the season typically ends around the end of October, unless your team qualifies for state, which is held at the Denver Coliseum in mid-November. There is a lot to teach in a very short amount of time, depending on the level of the team. Denny Brian, the head coach for the TJ volleyball team, stated, “My favorite part of high school is the family mindset. It’s more than just volleyball, it’s representing your amazing school and being proud of your accomplishments. I love helping a program become more competitive while learning to love their sport and be proud.” Being a part of the TJ community has allowed for Brian to bring the girls closer together.

With being remote all fall semester, most of the sports typically played in the fall have been moved to the spring semester instead. This has made it much harder for volleyball players that play both high school and club volleyball because they will now be played at the same time of the year. This leads the girls to have to make their own decisions for their upcoming season, “It honestly depends on the athlete, the club and coaches they play for, and their capabilities physically and mentally to balance them both. Of course I’m willing to work with any club/player if they want to play both, but I know the wear and tear on the body and mind from that much volleyball with not a lot of breaks,” explained Brian. This is a lot of commitment for a player, when also handling school, friends, and family, but if a player is committed to playing both seasons, coaches and clubs will help to accommodate that player.

Volleyball has had a huge impact on so many people’s lives, and with the pandemic going on, it has put a toll on so many players’ lives. Without being able to play, travel with your team, or make family-like friendships, many players do not feel like they are still connected with their teammates from previous seasons. Players are looking forward to hopefully being able to get back on the court in the spring.