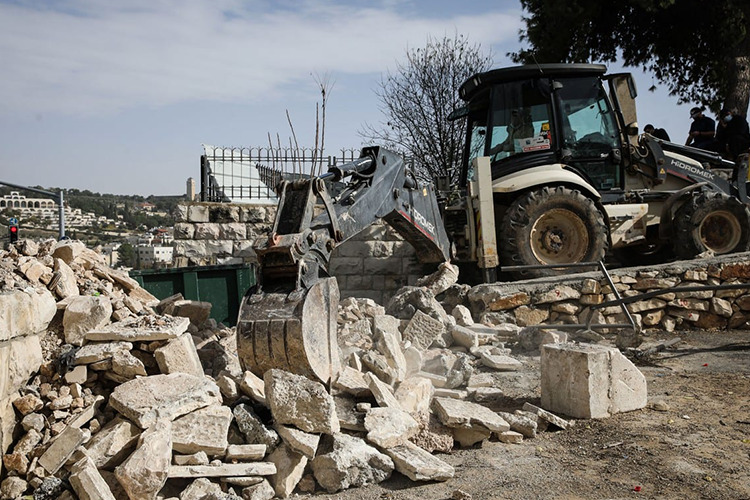 Israeli bulldozers become a part of the landscape at cemeteries in Jerusalem as walls and graves are disturbed to build a biblical theme park. photo by Mostafa Alkharouf for Anadolu Agency

“Bury me here. I will not move from my son’s grave.” These were the words spoken by a terrified yet brave Palestinian mother, in footage captured by Al Jazeera, as Israeli police forces forcibly pulled her body away from her son’s grave in Al-Yusufiyah cemetery located near the Al-Aqsa mosque in Jerusalem.

In October, an Israeli court approved the clearing of areas near and in the cemetery where a biblical theme park would be built, one of many that would form a “Bible Trail.” After hearing that Israeli authorities were bulldozing and burying graves to build the theme park, Ola Nababteh spent her days protecting her son’s grave from the looming threat of destruction. Other graves that have been exhumed contained the remains of soldiers from Jordan, Iraq, and Palestine that fought in Jerusalem in 1967. However, Israeli municipalities claim that the graves that are unearthed are unauthorized burial sites, thus they can be removed and that authorized burial sites will be preserved. In response, Sheikh Mohammed Hussein, the Grand Mufti of Jerusalem, says to the Reuters news source that “the graves of human beings cannot be violated no matter the gender, nationality or religion.”

This is not the first time that graves have been destroyed or buried by Israeli authorities. Sections of the Mamilla Cemetery, a historic site in which Muslims from all walks of life are buried, have been demolished to build the Museum of Tolerance, which plans to open in 2022 after many delays due to protests. In the International Religious Freedom report of 2009, the United States Department of State found that “The 1967 Protection of Holy Sites Law applies to holy sites of all religious groups within the country and in all of Jerusalem, but the Government implements regulations only for Jewish sites. Non-Jewish holy sites do not enjoy legal protection under it because the Government does not recognize them as official holy sites” and that, “many Muslim and Christian sites are neglected, inaccessible, or threatened by property developers and municipalities.” So, it is no wonder that Nababteh also fears that her two other sons’ graves, located in Bab Al-Rahmeh Cemetery in Jerusalem, will face the same fate as the graves in the Mamilla Cemetery and Al-Yusufiyah Cemetery. She claims that all of her sons were tormented and imprisoned in their lifetimes, but even in death, they can not seem to escape the events that happened 73 years ago in 1948 that shaped the relationship between Palestine and Israel.

Israel became a nation in the wake of the death and displacement of hundreds of Palestinians after the Arab-Israeli War of 1948 in which nearby Arab countries, Jordan, Iraq, Syria, Egypt, and Lebanon, sent forces following Israel’s announcement of becoming independent, but their efforts were to no avail. As a result, Palestinians lost their homes and lands. In 1967, 19 years later, Israel and Syria were engaged in both an aerial and ground battle, which Egypt joined after being fed false information by the Soviet Union that Israel was preparing to invade their borders. After six days of fighting, Israel came out victorious as they conquered lands that Israelis still occupy today in the West Bank and Gaza Strip. Later on, Israeli forces systemically destroyed Palestinian homes, displacing them and taking their lands, beginning a series of land disputes, tensions, and violence between Palestinians and Israelis that still exist today.