Business at the Broadmoor 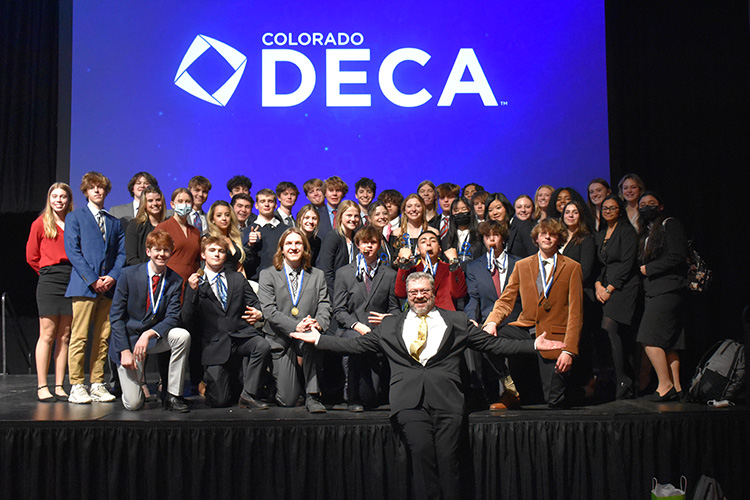 Saturday evening called for a road trip with an accompanying food stop in a rugged shopping center off the highway, but it did not stave off the sleepiness lulled by the hour long drive. Instead, the pastel pink castle presented before students aroused them as they hauled their suit racks bouncing against their luggage inside, completed an expansive scavenger hunt throughout the art-decked corridors, and ultimately prepared their professional outfits to kick start discovering their diamond.

The DECA 2022 State Conference was held back at The Broadmoor after a two year hiatus, from Feb. 26 – March 1. The experience was drastically different to say the least, with human interaction at its prime instead of simply recording role plays and submitting them. It was the epitome of debates between mask mandates as DECA required them, but The Broadmoor did not. This shift back to normalcy was just one piece of the diamond-shaped puzzle as Thomas Jefferson High School had 33 state qualifiers and 12 manuals written to advance in competition. There were 129 total qualifiers in District Three, which TJ belongs to, and over 2,500 students total. This membership number is down by 500 compared to previous years, but this did not detract from the enthusiasm as “[you’re not only] staying at the longest running five star five diamond resort in the world, you’re staying at it with a bunch of your friends, you’re competing, you’re making yourself better, [and] you’re giving yourself soft skill development that will help you be employed, so the opportunity is unlimited.” Matt Nicolo, TJ’s DECA advisor, lead advisor for team events for sports and entertainment team marketing decision making, and travel and tourism team decision making beamed.

The same competitive format reflected Districts as students participated in two role plays that emulated real-world business scenarios, and a 100 question multiple choice test in their subject area. The difference was competitors discovered at 5 a.m. whether or not they qualified for finals. Suzie Yeh, a junior at TJ and first time competitor, recalled, “In the waiting room that’s where the anxiety just builds up and in the prep room it’s [greater], but once you get set into the role play area, everything just kind of calms down a little bit. Your mind just goes blank, and you just kind of go with the flow in the moment.” Events and workshops highlighting the unique State experience helped relieve feelings of stress. Movies were shown at the Golf Club, several workshops including focus on personal brand and a real-life version of Shark Tank were held, and there was even a coined DECA Dance with line dancing lessons provided by cowboys in Colorado Springs. This created a holistic experience as Nicolo stated, “It was just fun to see them do what they do, to be students, to have fun, to actually get back into being a young person again, and that was so exciting for us to see as advisors.”

While youth emulate enthusiasm for learning through the DECA program, they also reflect professionalism and responsibility through their adolescence. Kate Little, a junior at TJ, currently serves as the chapter’s publicist and was the 2021-2022 Colorado DECA District Three State Representative. In addition to the jitters from competing and all the fun presented, Little had greater responsibilities as the channel of communication between District Three schools and the state level, meetings to attend with the production company to memorize speeches for opening and closing ceremonies, and most importantly, completing all these tasks running around the Broadmoor while practicing her speech for Colorado DECA’s presidency. It all paid off, because she reflects how, “[she] got off the stage and immediately burst into tears. It was the most rewarding experience of [her] life.” TJ reflected the same sentiment as a chapter with its utmost support for Little and the other International Career Development Conference (ICDC) qualifiers that just finished competing in Atlanta, Georgia. Out of 18,000 competitors from around the world, six students from TJ showed up. Their series of business jargon and decked professionalism placed them in the top 16th in the world, representing the top 1% of diligent DECA leaders. This year’s DECA State competition and ICDC conference just goes to show the molding of the leaders of tomorrow happens one suit, tie, and DECA pin at a time.