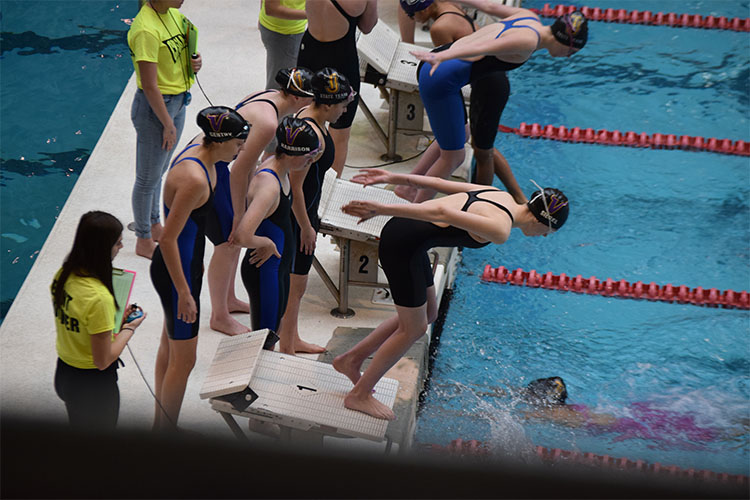 Girls' swim and dive team competed in the 3A championships with one of their best showings. photo by Christy Jordan

The girls’ swim and dive team made a splash at the 3A State Championships.

The lady spartans had a memorable season and were able to conclude their winter sport at the state championship. The team included nine total qualifiers who swam in preliminaries, and five girls returning for finals in swimming on the second day. TJ was able to give themselves a name at the 3A level with their best performances in TJ history for girls’ swim and dive. This year the team finished thirteenth in the state.

As the season progressed, more girls were able to qualify for state with two more individual qualifiers than last season. Returning qualifier junior Caitlin Beery was overjoyed with the team this year, “My favorite part of state was definitely the team. Cheering each other on and watching the relays were a lot of fun.” With three new state team members the team consisted of Beery,  seniors Phoebe Briney, Hanna Channell, Megan George, Morgan George, sophomores Georgia Hartley, Denise Hanselman, Avery LoJacono, and freshman Kate Little.

Day one of state started off with the first event, the medley relay. With Little on backstroke, LoJacono on breaststroke, Channell on butterfly, and Megan George on freestyle the relay finished with their best time and placed 23rd overall. Morgan George dominated her 200 free with the best time, and was followed by her twin sister, Megan, in her 200 Individual Medley. Little and Briney both competed in the 50 freestyle and made the consolation heat of finals and placed twelfth and fifteenth respectively. Divers Hanselman and Channell both made the semis in diving finishing twenty-second and twenty-fourth overall. On top of diving, Channell swam the 100 butterfly, as well as Megan who made finals in her butterfly and placed 20th overall. With three swimmers in the 100 free, Morgan, Little, and Briney all swam their best times. Little made finals and placed 19th and Briney finished 20th. First-time individual qualifier Hartley swam her 500 freestyle along with Beery who placed second. The 200 freestyle relay made coach Justine Sullivan speechless. Speed team of Beery, Little, Morgan, and Briney who had Sullivan’s highest places ever as a coach in state by placing second. Beery swam TJ’s last individual event, the 100 breaststroke, and placed third in finals. With the final event, the 400 freestyle relay team, Briney, Megan, Morgan, and Beery finished TJ’s state meet on a high note and finished eighth.

The 3A state meet this year truly showed the strength of the team and the bond that the small group of girls were able to create. “Everyone knew everyone. We all trusted each other,”  Sullivan stated. The girls were given opportunities throughout the whole season to get to know every girl on the team with team dinners, extra time at meets, and practice days that were focused on the mental health of the girls. Sullivan created an environment where the girls felt comfortable and where they were able to talk to anyone with a sense of trust. This was a  pattern in previous years that was highlighted this year by the girls on the team. The sense of comfort was only strengthened in the week leading up to state.

Although the team is losing four impactful seniors, Briney, Channell, and both of the Georges, the team is ready for future building seasons and is thankful for all of the work the girls had put in for the team. The team is ready to see who is able to step up next year and to have a state team that is full of new qualifiers and new times.