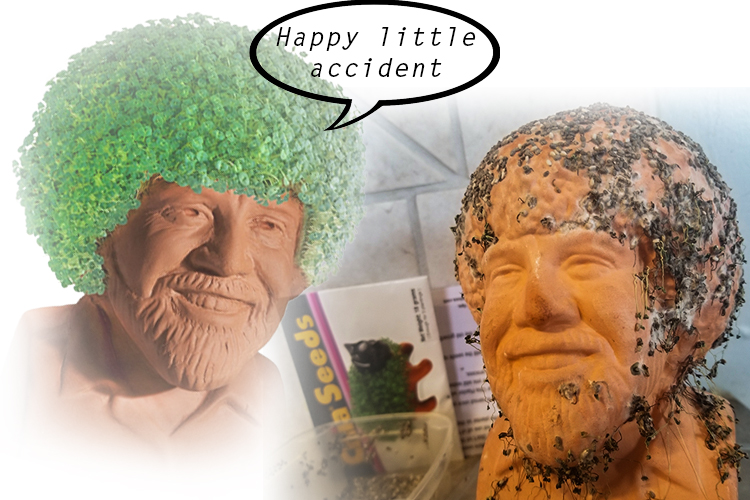 From home-grown fun to disastrous disgrace.

From the first day humans emerged from their evolutionary dwellings, they have had one job: procreation. This generation of life is not to be taken lightly. Whether that’s raising a child, a pet, or even planting your summer daisies, watching a protoplasmic bit of matter erupt into life is one of the most invigorating experiences a human being can have. The premise of a Chia Pet is no different, only more customizable and pleasing to the eye and soul of the beholder. From the early stages of the planting process to the first emergence of sprouts, the experience is truly amazing.

However, much like shaping the moral principles of a child, or molding the tendencies of a household pet, things can… go wrong.

Day One
Filling the sink full of tap water while you stand there may seem minuscule and frivolous, however it is quite a unique experience. The anticipation of submerging the full planter in water is such a peculiar feeling, and can only be experienced firsthand. If you are unfamiliar with the architectural wonder that is a chia pet, the entire structure is hollow, with a small hole to fill (in the case of Bob Ross, the top of the head). The directions recommend submerging the planter for about 30 minutes, allowing the material to fully absorb and initially saturate the outside and inside of the planter.

After this process, it is time to plant the seeds. It is recommended that for every one-third of a cup of chia seeds, one must use three cups of water, however there is wiggle room in this step. Most Chia pets are set up in a fairly simple way, which allows for the application of a nice layer of seeds. In this case, the water-seed mixture faces a gravitational adversity, as Bob Ross’s head is a round surface, with angles that are perpendicular to the ground. This makes for a more difficult application of seeds.

Nothing in the world is more relieving than finishing the preparation of a chia pet. Once this stage is complete, all you can do is give it plenty of sunlight, water, and watch your creation sprout into life; or begin its inevitable death.

Day Five
The fifth day came with subtle warning signals. Hopefully, if you decide to pursue the production of a Chia Pet, this is right around when you will begin to see the small sprouts of vines, emerging from the seeds. In Bob Ross’s case, not a spec of green was apparent.

This was the beginning of the end.

Day Seven
After a full week of watering and sunshine, finally, very few sprouts began to emerge. Continued watering and sunshine will kick this late-bloomer back into gear, right?
Day Ten
Wrong. Day seven may have brought a hopeful mindset towards the planter. Day ten brought the realization that failure was imminent.

See, the simple platform of the Chia Pet gave birth to an appetite for innovation, causing me to attempt a more advanced technique when preparing the planter. I applied seeds not only to the head, but also the beard of Bob Ross. Genius I thought, no one has ever done this before. This oversight may very well be what caused the startling results of day ten, as the only part of the chia pet that was blooming was the facial hair. Now you might be asking yourself, why is this so important? Well, at this point in the project I expected a full chia pet with short neat hair, and a nicely trimmed beard. Instead, what I observed was a bald rendering of Bob Ross, four vines emerging from his face. Horrendous. Not only is this a disgrace in the name of legendary painting icon Bob Ross, but this meant that the beard feature of the planter was absorbing all of the resources, sparing no water for the top of the head. From this point forward, things only went downhill.

Day Fifteen
Half a month. The average time it takes for a chia pet to fully mature, and even require some trimming. My chia pet? Absolutely contemptible. The only remaining sprouts began to shrivel up and die, leaving nothing but sadness and a hope-shattering depiction of Bob Ross.

Day Twenty
Just when I thought it couldn’t get any worse, mold. Mold everywhere. It grew on his head and around the entire planter. This was the final straw. I couldn’t bear the sight of such a hideous representation of the almighty Bob Ross. To contain my sanity, I cleaned off the planter, and re-boxed it, hoping to never again butcher the portrayal of such an important figure in society.

Reflection
What could I have done to prevent such a catastrophic failure? Perhaps my innovative over-step of applying seeds to the beard was enough to throw off the entire growing process. Maybe the location of the planter did not receive enough sunlight, or I didn’t water it enough. Overall, Chia Pet owners beware, the trauma that comes from a failed attempt at what seems like such a fun project may lead to a severe breakdown of self trust and sanity.