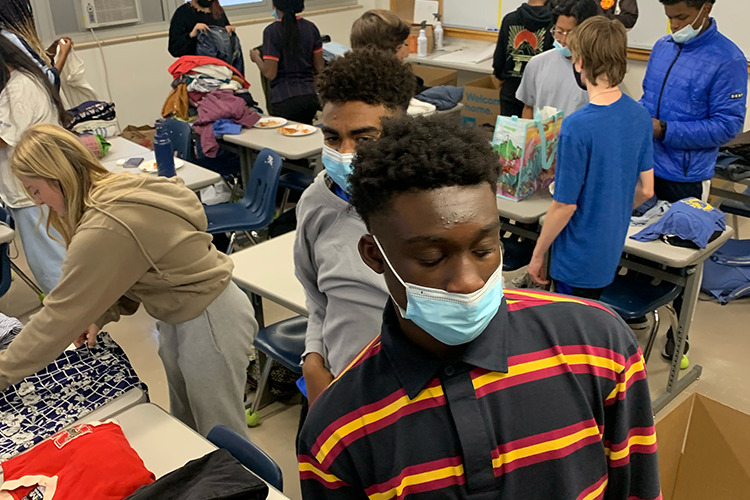 The commitment of FCA’s members contributes to the continued success of the club. photo by Yearbook

Fellowship of Christian Athletes is giving out warm clothes for the winter after school returns from break.

A club that is a result of the tweets of a student-athlete, Fellowship of Christian Athletes (FCA) embodies Thomas Jefferson High School’s ability to form a community and to spread positivity. The idea for the club started when Kyler Jackson, world language teacher and sponsor of FCA, saw the tag “#GodisGood” at the end of a TJ student’s tweets. Intrigued by the tag, Jackson sought out to connect with this student. In combination, they both decided that they wanted to seek out others who shared a similar love in their respective beliefs. Now, in its eighth year, FCA has declared its role in the TJ communities as a welcoming group of individuals who look to do good in the community.
Athletics are a significant part of the TJ culture and allow for bonds to be made within a team environment. Similarly, FCA looks to create bonds that will spark mindful conversations about meaningful topics and ignite change in the community. With the club consisting of driven students who demonstrate leadership in their commitment and actions, the prospect of the club is encouraged by the continually promising members of FCA. Jackson excitedly looks forward to the future of the club and its impact. “[FCA] is a motivating factor to see the kids involved,” Jackson explained, “it really allows me to see a bright future for the youth.” The collaboration of the members of FCA allows for a well recognized group across the school.

Senior Nina Patterson, a member of FCA, explained that “FCA has helped me find a community in which I feel safe and where I can express my feelings religiously with people who have the same religious identity as me.” She added that students do not have to be Christian to join the club. Patterson emphasized that the club has inspired her to be a better person and provided a community where she feels comfortable expressing herself. This effect has allowed students like Patterson to work together to form events that can positively affect the community. With this being said, one of the ways in which FCA is looking to continue its role of generosity in the TJ community is by organizing a clothing exchange. As the colder months approach, their goal to outfit students in need of warm and comfortable attire has sparked the donation of coats, long-sleeved shirts, and pants among fellow Spartans. FCA began this project a few weeks ago and have been promoting the event to encourage donations. They will be setting up a table with the clothes that have been donated after school on Monday, November 29th after the school returns from the week-long break to hand out the clothes to the TJ community. FCA aims to continue this event on an annual basis and put together more events like it to contribute more to the success of the school’s community.

Without a doubt, FCA has provided a great opportunity for many of TJ’s students and will continue to have the same effect on incoming club members. With the club meeting every Thursday at lunch, interested TJ students can easily be welcomed into this community upon entering room 14.