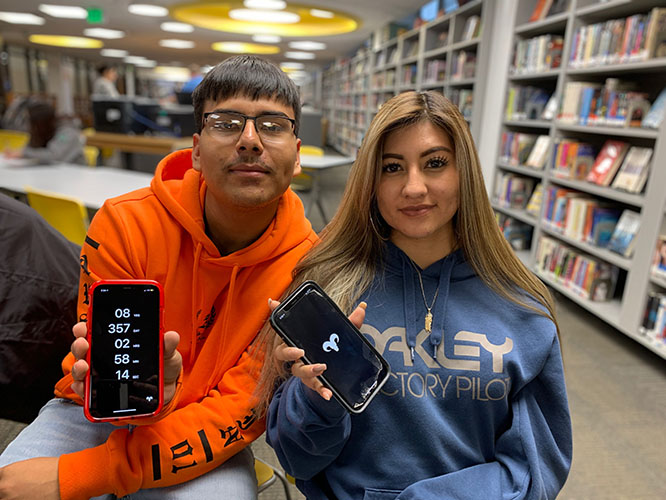 Cristian Perez and Jazmine Galvan hold up the Countdown application on their phones. photo by Destiny Hernandez

The new movie Countdown is an example of how horror movies can be presented in  new and interesting ways.

Horror movies are made to spook people and create entertaining experiences for those who watch while they are with their friends or family. The movie Countdown enhances the idea that things out of the ordinary can happen all the time, it just depends on the situation. The new horror film is based off of an app that counts down how long a person has left to live. In the movie, the main characters are given their timed life and start to realize that the app’s estimation was correct. The movie starts off like any regular movie, and it escalates quickly. When making movies, it is always difficult for the writers and producers to include unique qualities compared to the many films that have already been made. The competition to create new and original content is always difficult, but Countdown built up suspense and anxiety in the viewers making it seem as smooth as possible for the content to be considered original.

As always, the lead character had many things going on. In the movie, the jump scares were there but left the audience very confused. Confusion began after the first death came out of nowhere and there were no clues as to who the killer was. But soon, most people could tell what was happening and what was going to happen next became very obvious. Some viewers found it upsetting that some of the characters were experiencing dilemmas so quickly. This is why writers usually create a backstory to intrigue the audience and let them know what is going on.

Jump scares are the most important part of making a horror movie scary. Usually, people know when they are going to be frightened, but Countdown did a phenomenal job of building up fear. Viewers were able to be in the moment while in the theatre and they could relate to how the actors felt in the movie. Junior Cristian Perez said that the movie was, “Something different that [he had] never seen before.”

As always, there are stereotypical characters in movies, like the helpless girl, the rescue guy, and the problem solver. In almost every horror movie those typical characters are shown to develop the plot, and it could be very difficult not to use these types of characters, so they are usually involved. Each of these characters has their own situations to overcome so they can be presented as the archetypal character that they are supposed to portray. For example, the rescue guy has to overcome the threat to rescue the others in the movie. The same thing applies to other characters in the movie. The movie also showed the different perspectives of the main characters in order to demonstrate what it would be like to be in their place. This gave a new view of the movie every time the scene changed.

No hints were given that the ending would provide a sudden closing. Perez also mentioned, “Sometimes movies do need to end at a cliffhanger in order to maintain that mysterious ending. People will never find out what actually happened at the end.” This makes the movie more meaningful. Bringing a movie altogether in the end is a tough process. Every situation that the characters are in have to end and something big has to happen to leave the audience in shock and ultimately have closure. When writers leave viewers with a cliffhanger, does the audience really leave satisfied? Sometimes it is just easier when writers end with nothing, just to leave the audience waiting. Overall, Countdown included certain elements that made it an above-average horror movie.