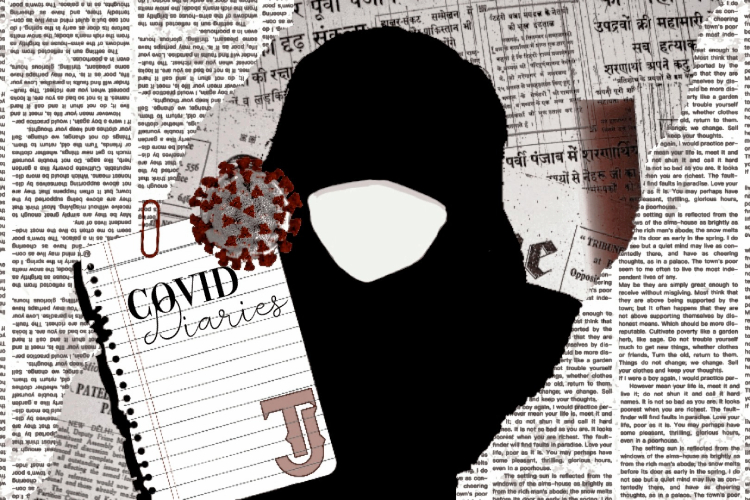 Interestingly, my story about the COVID-19 pandemic dates back to January. I wasn’t feeling super good, I felt out of it. I went on a trip to New Mexico with my soccer team to play two games. However, I lacked energy and felt this swollen knot on the side of my neck. Let’s just say ibuprofen was my best friend for that trip. When I returned home, I scheduled a visit with my oral surgeon, as I had just had my wisdom teeth out a week or two earlier and thought that he would know what to do. When I was able to see him, I asked about the knot on the side of my neck and if it had anything to do with my surgery that I had. He said that it was unlike anything that he had ever seen and advised me to go to the emergency room immediately. Upon arriving at the ER, it had become dark outside and people were going home for the night. Everything seemed eerie until I heard my name called to be seen in the ER. A nurse performed procedural tasks before I was able to enter my own room. She checked my blood pressure, took my temperature, and screened me. Next, my mom, brother, and I were taken to a room to wait until I could be seen by a doctor. After a little while, someone arrived at the room and took a look at me. Before I knew it, I was attached to an IV and waiting on someone to get back to me on how to proceed. My mom tried to distract me with witty comments, as she knew that I was concerned and uncomfortable with the situation. My brother waited impatiently because he still had to complete homework due the next day. After about an hour of waiting, the doctor that was dealing with me entered the room again. I don’t recall exactly what she said, but it confirmed what I had thought: everything was not okay. Per the doc’s orders, I was to drive to Children’s Hospital where I would stay the night and potentially undergo surgery, which at the time was the scariest thing that could happen to me. Little did I know what the next two months and rest of the year would be like my life would be forever different.

After a drive of unspoken worry, I had arrived at Children’s hospital. Directions to the sixth floor were provided to me where I would be greeted by two residents. After a series of questions were asked, the residents left my room, and it was time for me to try to sleep. What had just transpired? I thought to myself. After about a week-long stay in that hospital room and given IV antibiotics, the doctors thought I was fine to return home. No surgery, just IV and antibiotics. I was skeptical. The size of mass on the side of my neck was no smaller and I was splitting hairs to determine whether I felt the slightest bit better. However, I listened to the doctors because no way did I want to have surgery, but just like that, I was back in that same hospital, going back to the same floor to report that I wasn’t any better. This is when I began to get scared. I began to doubt whether I would get better. In fact, I remember distinctly asking a doctor who came to my room after my first surgery if I would get better. Let me tell you, the reassurance in the doctor’s voice telling me I would recover may have just gotten me through. See, when you spend a lot of time in the hospital, you appreciate the people who comfort you, who distract you, who treat you like you are going to be okay. To speed things up, I returned to the hospital for what would be my third and final stay. I had a second surgery done in which a few lymph nodes were removed. I began to get better, however, I was not free of the bonds of illness and fear. After two months, I was finally out of the hospital for good. The size of the mass on my neck began to decrease and I became full of hope. This was mid-February. I did not realize that the experiences I had gone through would make me a different person. A person filled with fear, grief, and shock. Before all of this happened, I felt free of burden, free of fear, invincible. I now realize my reality, anyone’s reality; nothing is guaranteed in life, and it is impossible to know what life has in store for you.
This led into the pandemic. Just having experienced a serious illness, no way was I going to take a virus that was reportedly fatal lightly.

My cautious approach may have just given me the opportunity to observe the world remotely. I became familiar with different personalities and perspectives on the pandemic. I quickly realized the people who were going to frustrate me the most, and that we were not going to be able to handle the virus. However, I was also able to observe the good in humanity. I observed people who risked their lives to help others sick with COVID-19 and I watched as people tried desperately to cheer people up and let them know that no one is alone. So I guess my main message is perspective is everything. As the pandemic surges across the nation and world at record-breaking numbers, my message is to have compassion for the people around you regardless of the circumstance. Certainty is the most uncertain idea in the world, but I will tell you that at the most uncertain time in my life, it took my friends visiting me in the hospital and treating me no different than any other day. It took multiple nurses with hearts of gold, and it took my mom sleeping in a hospital room for me to get through it. I believe the best thing a person can do in this world is make another person feel better. Regardless of the circumstance, I’d encourage you to be that person.