Crisis at the Border 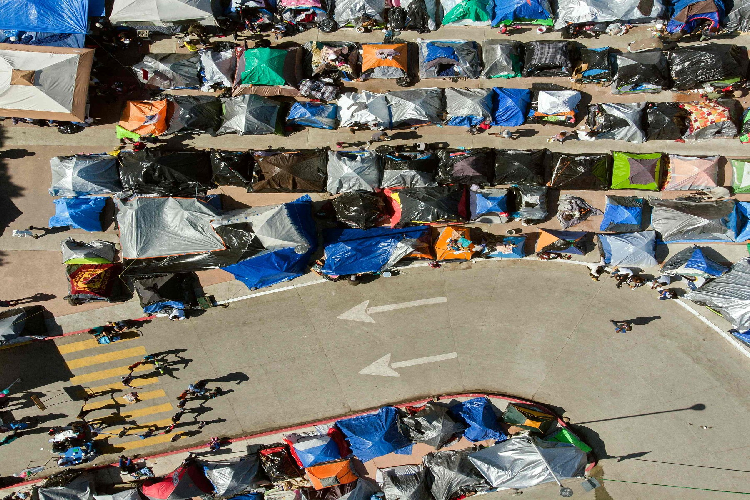 A migrant camp full of tents in Baja, California. photo by Guillermo Arias

Last month the U.S saw more immigrants crossing the U.S-Mexico border than any month before, but what is behind this border surge, and should it be considered a “crisis”?

The United States has always been seen as a place of refuge for those looking to escape violence, corruption, economic depression, and general inhumanity, and with conditions in Central America worsening as the coronavirus pandemic continues to spread, an increase in refugees is expected. Since the beginning of current president Joe Biden’s presidential campaign, one of the most pressing questions has been how he plans on handling immigration conflict at the U.S. border with Mexico. More recently, a surge of migrants, especially unaccompanied minors, has caused conservatives to label the current situations at the border a “crisis,” while Democrats see it as a minor bump in the road. Forgetting the political conflict surrounding the U.S.-Mexico border, why has the situation garnered so much media attention?

In a data analysis from November 2020 to the end of January 2021, the International Rescue Committee (IRC) found that “the number of people looking for information related to identification documents and immigration requirements jumped dramatically” from a 500% increase between October and November to a 1,500% increase between November and December. At the beginning of March 2021, the Mexican Commission for Refugee Assistance (COMAR) found that “in just two months of 2021, more than 9,000 people from Honduras, Guatemala, and El Salvador have requested asylum, comprising 40% of the total of applications submitted in 2020.” According to National Public Radio (NPR), the number of migrants crossing into the United States in March “was higher than in any other month in at least 15 years.” While the general increase in migrants so far this year has been a large reason why so many heads have been turned towards the issue, the increase in unaccompanied minors at the U.S.-Mexico border has become the major talking point surrounding the border “crisis,” and the largest concern surrounding Biden’s administration.

Unaccompanied minors crossing the U.S-Mexico border is no new phenomenon, and each of the past three presidents have been forced to implement new policies regarding how to handle migrant children, most notably Donald Trump’s “zero tolerance” policy and the building of cages under the Barack Obama administration. Yet, no president has had to face as big of a challenge as Biden has in the early months of this year. In March, the average number of unaccompanied minors crossing into the United States reached 550 minors per day, according to a data review from The Washington Post. In an operational update from the U.S. Customs and Border Protection (CBP), at the end of the month, the number of unaccompanied minors to cross the border reached an all-time high of 18,890.

So, what has the Biden administration been doing to solve this humanitarian crisis? Some of Biden’s first orders as president included loosening restrictions on immigration put in place by former president Trump, which included allowing unaccompanied minors into the country. Many members of both parties have been critical of Biden’s approach to border restrictions, one of them being Democratic Representative Vicente Gonzalez, who said, “When you create a system that incentivizes people to come across, and they are released, that immediately sends a message to Central America that if you come across you can stay.” Recently, the Biden administration has begun buying out hotels for immigration facilities to flow over into, which has caused an uproar of controversy. It is also important to note that Biden’s border coordinator Roberta Jacobson is stepping down at the end of April, and with mounting pressure on the Biden administration to tighten gun laws, the border crisis shows no signs of improving.

However controversial the situation may be, the Biden administration is allowing much-needed asylum to thousands of children and adults, and while many are quick to label the border surge as an American “crisis,” they often overlook the real crisis of violence and inhumanity that causes these immigration surges.