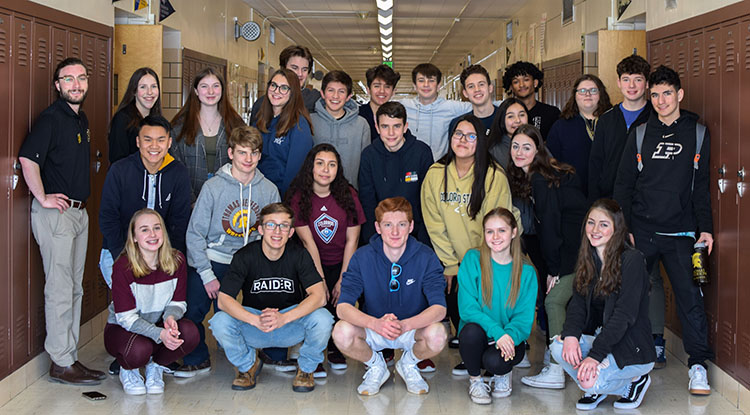 Students in this club have the opportunity to learn and engage with the Jewish culture. photo by Caitlin Beery

The newest club at TJ offers a safe place for Jewish and non-Jewish students to come together and learn about the culture of Judaism.

Judaism has been the target of prejudice and many discriminatory acts over the last few decades. In recent news, many attacks on synagogues, festivals, and other holidays have shaken the community. Jewish Student Connections (JSC) wants to change that. JSC, along with Jewish Colorado, are attempting to change this with learning and understanding of the Jewish culture. JSC, the newest club at TJ, creates a welcoming environment for people to discuss and learn. Meetings include food, games, and discussions that are part of the Jewish culture.

The club also gives its members a taste of Jewish culture. Meetings often include food from Israel and the Middle East, like falafel. Sophomore Lucy Adlen mentioned, “Meetings include discussions surrounding the meaning behind holidays, anti-semitism, discrimination, and Judaism in pop culture. We play games, do crafts and projects, and have discussions all centered around the Jewish religion.” Learning about the culture and religion creates an understanding within the high school setting, and hopes to stop the cycle of hate. Additionally, JSC also discusses the meaning behind some of the lesser-known Jewish celebrations. For instance, Tu BiShvat, which occurs on the 15th of February, commemorates the need to support the environment and care for it. This holiday serves as a reminder of nature’s positive power. Tu BiShvat is celebrated by planting trees. This holiday along with many others are highlighted in the club.

This club exists in many forms throughout Colorado high schools, and they all have different goals. At TJ, the club strives for knowledge and understanding of Jewish customs. Senior Shalom Busse said, “The club tries to offer students at TJ, both Jewish and non-Jewish, the opportunity to become exposed to the Jewish religion and culture. JSC also exists as a safe space for any student in need of it. We accept all people and are always ready to discuss perspectives and events from many different people and places.” JSC organizer, Ben Sanders, said, “Our values are pluralistic. This is a club for everyone to really learn about culture and to build a community, as well as build allyship.”

JSC is different from other clubs at TJ because it is organized by Jewish Colorado itself. This organization tries to strengthen their community in Denver, Israel, and the world. According to their website, www.jewishcolorado.org, they created JSC to “promote a self-chosen Jewish identity and promote a safe pluralistic environment for self-exploration.” JSC exists in schools across Colorado and have recently added TJ to their list of schools.

The members hope to expand interest in the club. Adlen explained, “I hope the club keeps expanding and connecting with other clubs and students. I want the club to teach people that it doesn’t matter who anyone is, but just that it is a safe and welcoming space for anyone curious about Judaism.” The club strives to connect people of the Jewish faith, and for people who are curious about Judaism. They meet every other Friday in Amber Wilson’s room during lunch. Everyone, Jewish or non-Jewish, is welcomed to join the club.