DECA Gets Down to Business 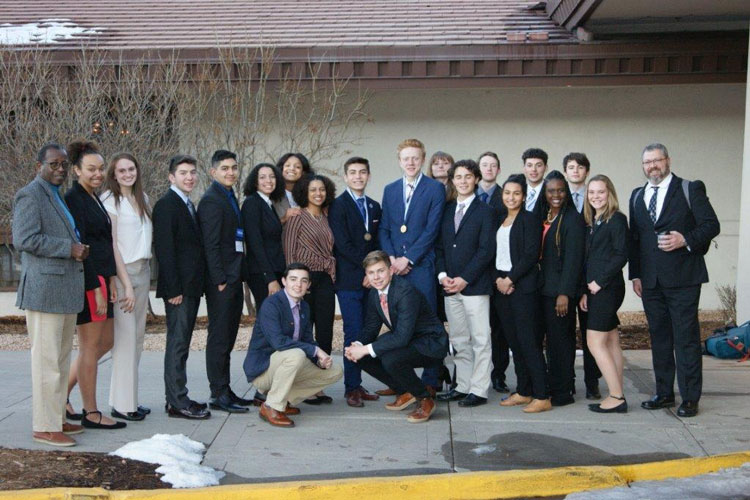 Distributive Education Clubs of America (DECA) is a club at TJ that prepares students for a career in business. Club members prepared for the statewide DECA competition, which took place over the course of three days. The competition was held in Colorado Springs. At state, 21 Spartans participated in workshops that focused on specific events to help develop their business skills. The students competed against other Colorado DECA students in two role-play events that simulated a business environment.

The TJ students had the opportunity to create fun memories, gain more knowledge about business, and connect with their peers. “My favorite part of state was getting to know some of my classmates outside of school,” explained junior Elle Maggio. The students traveled to Colorado Springs, where they competed at the Broadmoor. Through this experience, the DECA students collaborated with their fellow Spartans in order to do their best in their events. Prior to the state competition the DECA students took an exam that will determine who qualifies for state. The competition was then divided into two sections with the role plays.

This experience also allowed the Spartans to go head to head with students from other schools. “[I learned] that people are really competitive about DECA and I’m going to have to work extra hard next year,” mentioned Maggio. The students who attended were given the chance to learn more about the business world. “[The] competition taught me important business skills including professional behavior and innovative thinking,” described junior Hanna Channell, who competed in the hotel and lodging management event. Senior Jake Kraus and junior Nimo Romero-Campbell were state finalists.

The three day competition was full of learning experiences for the students who attended. DECA Spartans learned more about business while also expanding their collaboration skills. “Collaborating with students was an important and helpful aspect of studying and preparing for the competition,” stated Channell. Students had to work together in order to do well in their own events. DECA is an extremely rewarding class for the students who participate in it. The class grows relationships between students and introduces them to business etiquette.

The students who participated in the Colorado state DECA competition had the opportunity to collaborate with their peers as they competed against other schools. The Spartans who participated worked hard to do their best in their events while they expanded their knowledge in business. The students were able to represent TJ in the competition and many of them will be returning to state next year.