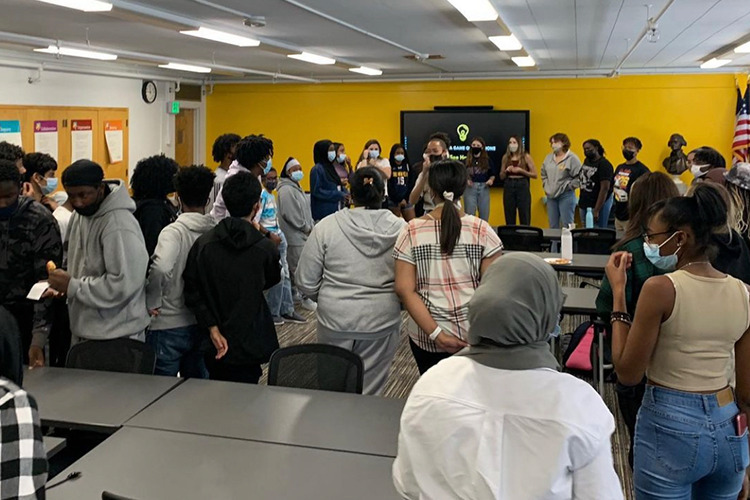 A multitude of students participating in Black Student Alliance activities and meetings in order to have more conversations about Black History Month. photo by Sara Eyassu

TJ students realize the importance of Black History Month due to efforts made by both BSA and staff members.

Thomas Jefferson High School is no stranger to inclusivity and community. Over the month of February, which is Black History Month, TJ included more people and their opinions in important conversations, while also incorporating new ideas through the Black Student Alliance (BSA) club.

Black History Month started in 1926 as “Negro History Week” in order to give recognition to black lives and black history. However, since the appreciation of the civil rights movement, “Negro History Week” was revamped into Black History Month. The acknowledgement of black identity, achievements, joy, and wellness was the focus of this year here at the school. This month gives people the opportunity to talk about more than slavery, racism, and segregation. Instead, people talked about the reappropriation of the n-word and other derogatory terms used to describe individuals in the black community as well as black joy and the importance of black culture.

Amir Tehrani, a junior in the BSA club, talked about BSA using their incredibly motivational platform to talk about black hair because “black hair is a huge and important part of our culture.” Most people believe that the appropriation of black hair styles (such as box braids and afros) by white people is a form of cultural appropriation that should be addressed. Tehrani also touched on the significance of bias, and the way that bias influences the way people see each other, which also influences the lives of each individual. The goal is to raise awareness so that people can unlearn discriminatory thinking in hopes of making school a safe and secure environment for everyone because, “most people don’t realize the impact that their bias has on others,” Tehrani noted.

Another topic the BSA Club talked about was notable individuals involved in black history. Tehrani echoes the necessity of the district to “extend the teachings of U.S history and English classes beyond what is normally taught in an effort to help students with diverse backgrounds personally connect to the topics at hand.” Many believe that if more people were able to connect to what is being taught, then teachers and students would be more culturally sensitive, allowing people to have these types of uncomfortable conversations. Conversing about ideas and facts that aren’t talked about is an important piece of creating and implementing the change needed. During Black History Month, BSA attempted to discuss these ideas more publicly. One platform BSA used to connect with the student body was the Spartan Edition, which Tehrani believes was a great resource for members of BSA to get involved and talk more about subjects that people don’t normally talk about. Nyanwat Mayom, a senior participating in BSA, agreed, sharing, “The Spartan Edition allowed us to have a segment in which we were able to respond to questions that students had about black culture and BSA as a club,” thus providing a good platform for the club to enter their ideas in a more public fashion.

The leadership team also helped determine a lot of aspects over the month of February. Jon Poole, assistant principal and the leader of the leadership team, wanted to ensure that the idea of representing students and staff alike continues to make a more positive impact on the community. Poole believes that even though there is more to do, one of the first steps to being able to get things done is to have these “intimate and difficult conversations as a group to push these ideas forward within the school.” The school doesn’t only want a month for just the purpose of celebrating black students, because every student should feel as though their culture is represented throughout the entire year and not just a singular month.

Mayom said that although “the school did alright, BSA did more.” This is important to note as Poole also agreed, sharing that “we can always do more” because “sometimes we don’t really pay attention to the things that really matter, [and] we want to make sure that every student has a voice and an opinion as well as more opportunities, but our plans don’t always meet the expectations we need them to meet.” Poole not only believes that more can be done to include people, but also that more can be done to give people that “aren’t normally given opportunities, the chance to have more.” As a result, staff members are starting to pay more attention to the BSA Club and the work they are doing to ensure that black and African-American students have a voice in the student body.

Before COVID-19, there was a group of TJ teachers who came together in order to present ideas on how to include more student voices. Many of the teachers were focused on inclusivity with black students and students that identified as latinx. In these groups, teachers discussed race and the necessity of creating a space where every student was included and could present their ideas fairly, regardless of how they identified, in order to create a more stable environment that accounts for the diverse backgrounds of everyone.

Due to the work of BSA and the perseverance these students have demonstrated over their lifetimes, they are striving for change. Mayom shared that one of the club’s goals is to ensure that “black [student] voices are heard.” This was evident during Black History Month as the school learned more about black history due to the combined efforts of the staff and the BSA club. Although most people believe that the school has room for improvement, many believe that BSA did an excellent job at spreading the word and establishing change both within the student body and the staff. With more work needing to be done throughout this year, patience and extreme perseverance is required. However, changes can be made because the majority of people want to see the amount of diversity and inclusivity at TJ increase, and due to the students and staff, it is possible to move forward with these ideas and discuss topics that don’t normally get the recognition they need.