“Don’t Look Up” Makes Me Want To Look Away 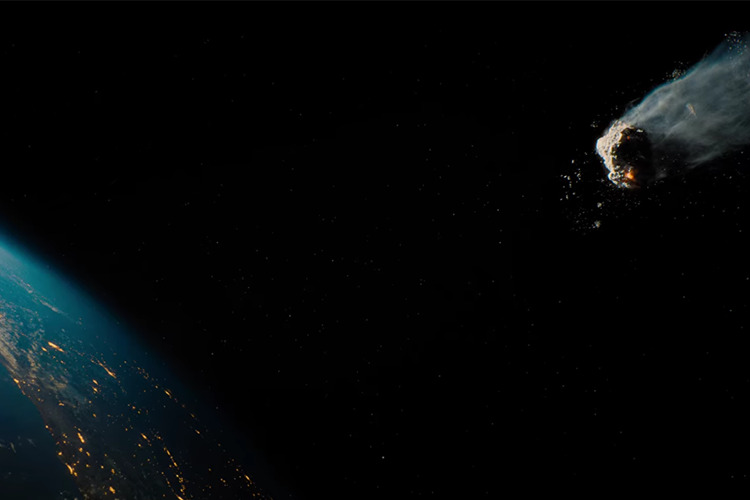 The Dibiasky Comet hurtling towards Earth while humans eat their last dinners and say their goodbyes, perhaps wishing that they weren’t so oblivious. photo courtesy of Netflix

The movie Don’t Look Up will put you through a roller coaster of emotions that will have you looking everywhere, both at the world and at yourself.

This review contains spoilers. You have been warned. Proceed with caution.

Six months and fourteen days is the amount of time humanity has left before a comet collides with Earth, wiping out every species. At least that is the reality facing the characters in the film Don’t Look Up. The satirical science fiction film made its streaming debut on Christmas Eve of last year and quickly became a global hit. Along with having a phenomenal cast composed of A-list actors— like Jennifer Lawerence, Leonardo DiCaprio, Rob Morgan, Meryl Streep, Jonah Hill, Mark Rylance, Cate Blanchett, Timothee Chalamet, and Ariana Grande to name a few— the film also explored heavy topics by drawing parallels between the fictional world of their characters and the world we live in. The film captures the story of two low-level astronomers and how they navigate institutions and systems that are hell-bent on preventing them from telling the world what they have discovered: a comet that has the power of a billion Hiroshima bombs and is larger than the asteroid that led to the extinction of the dinosaurs is going to collide with Earth, changing life as they know it.

To no one’s surprise, one of those institutions is the U.S. government. After Kate Dibiasky, a Michigan State University (MSU) doctoral candidate, and Dr. Randell Mindy, a tenured professor in astronomy at MSU, discover the comet, they receive an audience with President Janie Orlean. In this interaction, President Orlean orders them to sit tight and wait. This launches them into their journey of attempting to alert the public using the media, which fails miserably after the New York Herald more or less slams the door in their faces. All of this demonstrates that not only is the U.S. government a joke, but that news outlets have been corrupted as well because the majority of publicity is centered around Hollywood gossip and not the things that really matter, like the comet about to destroy everything. The reaction of the president is something that is consistent across the public as people mock and ignore the truth by distracting themselves with their own lives, the lives of celebrities, and technology. Furthermore, politicians and the rich are portrayed as self-serving. This is further emphasized as President Orlean aborts a mission to redirect the comet with the intention of using technology, created by a billionaire who is eerily similar to Elon Musk and has more power than POTUS, to explode the comet into pieces and allow it to hit Earth. They mask the greed with promises of new jobs for citizens as they would mine the comet pieces for the valuable minerals it contains. This event serves as the catalyst that propels the Look Up movement spearheaded by Dibiasky and Dr. Mindy with the intention of shaking the nation awake to their reality; they are all about to die.

Don’t Look Up is one of the most viewed films; however, there are many mixed reviews and opinions about this movie. When I clicked on this film, I had high expectations because of the cast, but not even they could save the train wreck that is this movie. Although there were some parts that I enjoyed, the bad far outweighed the good.

One of the first things that jumped out at me were the female characters or more specifically Kate Dibiasky, who is played by Jennifer Lawrence. When I met Dibiasky, I was ecstatic that there was representation for women in STEM (Science, Technology, Engineering, and Mathematics). However, I was extremely disappointed, yet not surprised, when she was constantly undermined by the men in her life and the world. The writers of the film had her become a meme because she simply refused to sit idly by while the hosts on the Daily Rip oversimplified and diluted the truth of the comet. Watching her justified outburst was entertaining, but I wished the writers included more scenes in which the traits Dibiasky gained over years of navigating a field of study dominated by men were highlighted. Since she’s a female doctoral candidate in astronomy, you would expect that she would be able to hold her own and be hardcore. Unfortunately, that is far from the truth. She doesn’t speak up when she is dismissed in the meeting with President Orlean. She doesn’t fight back when the government silences her by forcing her to sign a document saying that she will not speak about the comet. She doesn’t speak up when Dr. Mindy becomes the government’s puppeteer sprouting inaccurate information to the public, instead she waits until she sees the comet in the sky and calls Dr. Mindy to act.

Another female character that I was initially ecstatic for was President Janie Orlean, who is played by Meryl Streep. However, I quickly became displeased when she dismissed the discovery in order to maintain her public image, and when it was later revealed that she was having an affair with her supreme court nominee, I was not surprised. I believe that the screenwriters may have been trying to make the statement that no matter the gender of the president, this is what our democratic system has become: a laughing stock where you don’t need any qualifications to be in a position of power. This shines a light on the important detail that our government has become much different from the ones the founding fathers envisioned, and although I agree, the fact that they chose a female president to carry this message grates my nerves. The writers assume that a female president, if elected, would continue on the same path as her predecessors, which is irritating to say the least. To make matters even worse, Dibiasky heads the Look Up movement and President Orlean creates the Don’t Look Up movement in opposition, essentially pitting woman against woman instead of cultivating an environment where queens fix each other’s crowns.

I believe it’s safe to say that I adore movies with strong female characters defying the norm, which this movie didn’t deliver. In its entirety, the way females were represented in this movie emphasizes and perpetuates the patriarchal society we live in today.

Although this film is marketed as a comedy, there are some serious topics covered that reveal some harsh truths about our world. The film draws parallels between the comet and the current global climate change issue the world faces and how politicians are too busy looking after their own interests to do anything about it. It’s meant to jar the public into action and get them to look to the scientists instead of the politicians. I wholeheartedly agree with the message, even though a comet crisis is different from the COVID-19 pandemic or the climate change issue, but I detest the way the public is portrayed. They are essentially narrow-minded individuals who are incapable of understanding the very real threat humanity faces because they are too enamored with their own lives. This movie didn’t make me hopeful about our future because there is some truth in that we often choose to remain ignorant despite the glaring truth, revealing that no one could save us— not the president, Silicon Valley technology billionaires, scientists, celebrities, etc. It’s essentially saying to pay attention to what’s going on in our world but that no matter what we do, nothing will change. It would’ve been better if the motif throughout the movie wasn’t a comet not only because it’s so daunting and final, but it also doesn’t exactly match with some of the issues we face in our reality, especially the conclusion the viewer comes to about newspapers. The New York Herald pretty much ignored the story, which is extremely hard to believe a newspaper would do in reality since it is a sensational story. The movie also intertwines science with politics which casts doubt on the facts. This shouldn’t be done as it doesn’t get people to listen but rather pushes them further away into their distinct corners. It is exactly why people are refusing to observe CDC guidelines about COVID-19: the science is shrouded in myth and politics casts another layer of doubt over it. Overall, this movie was a rollercoaster, one that I’m not interested in getting on again but one that I will always remember.

As a result of the doomsday vibe of this movie, I would like to leave this review with some positives. I want to advise everyone to seek knowledge and strive to educate yourself about what’s going on in the world because one thing that this movie got right is that it’s very easy to become absorbed into your life, the lives of celebrities, and technology. Even though everything may feel like you can’t do anything about it because it’s bigger than you, you can. So do your part: mask up and take care of yourself and others, TJ!