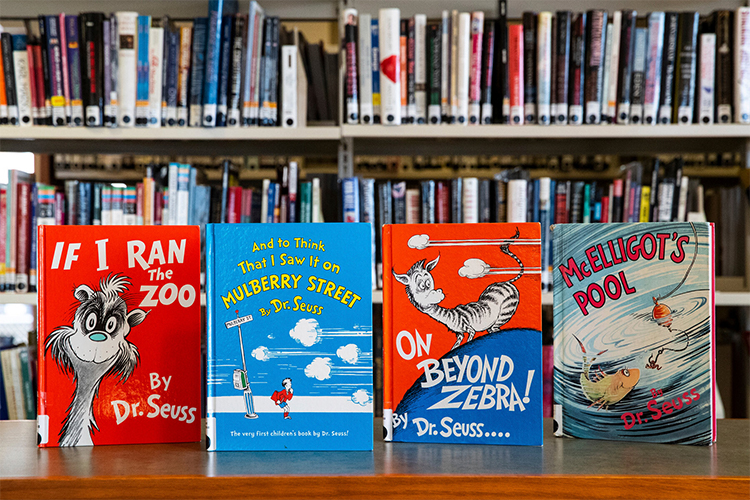 Four of the Dr. Seuss books. photo courtesy of The New York Times

Dr. Seuss has created books that readers see “portray people in ways that are wrong.”

Theodor Seuss Geisel also known as Dr. Seuss is one of the most known book creators to make children’s books. Geisel started using the pen name Dr. Seuss after he was forced to resign from his post as editor-in-chief of the Dartmouth humor Magazine, Jack-O-Lantern. He managed to keep writing for the magazine, but under the pen name “Seuss” which was his mothers maiden name. He then started using “Dr. Seuss” as his name. Dr.Seuss is best known for his books named, One Fish Two Fish Red Fish Blue Fish, Green Eggs and Ham, and Oh the Places You’ll Go!. These books helped children learn how to read. Dr. Seuss’s books are known for their nonsense words, playful rhymes, and strange creatures. Children worldwide looked up to Dr. Seuss and enjoyed reading his books. However, on what would be his 117th birthday, things took a turn.

Dr. Seuss Enterprises made a big announcement saying that they would stop the licensing and publication of six books because of racist and insensitive imagery. These six books are named And to Think That I Saw It on Mulberry Street, If I Ran the Zoo, McElligot’s Pool, On Beyond Zebra!, Scrambled Eggs Super!, and The Cat’s Quizzer. He was also criticized for the way he portrayed people of color. For example, In the book And to Think That I Saw It on Mulberry Street, a character described as Chinese carries chopsticks and a bowl of rice, has two lines for eyes and wears Japanese style shoes. Also in If I Ran the Zoo, two men who were supposed to be from Africa are shown shoeless, shirtless, and wearing grass skirts. They also are carrying around exotic animals. Because of this a lot of teachers question if they should still teach about these books or drop them to teach more books that positively represent people of color. Another problem is that these books are classic books and they hold that power, so it’s more difficult to cancel a classic book. If kids were to open these books and see images of themselves that are negative and laughable, they would see how they are devalued in society and that’s not what the community wants. Therefore, the goal is to represent them in a positive way that would have a greater effect.

The Denver Public Library is planning to not remove any Dr. Seuss books from its collection despite Dr. Seuss Enterprises announcing they would stop the publication of the six books. The Denver Public Library released a statement saying, “Libraries across the country are having conversations around how to balance our core values of intellectual freedom, with the harmful stereotypes depicted in many children’s classics.” They want to be able to give children the choice to decide what they want to read, whether it’s Dr.Seuss books or any other children’s books that will help them grow and learn about the world around them.