Dress for Success or Dress for Distress? 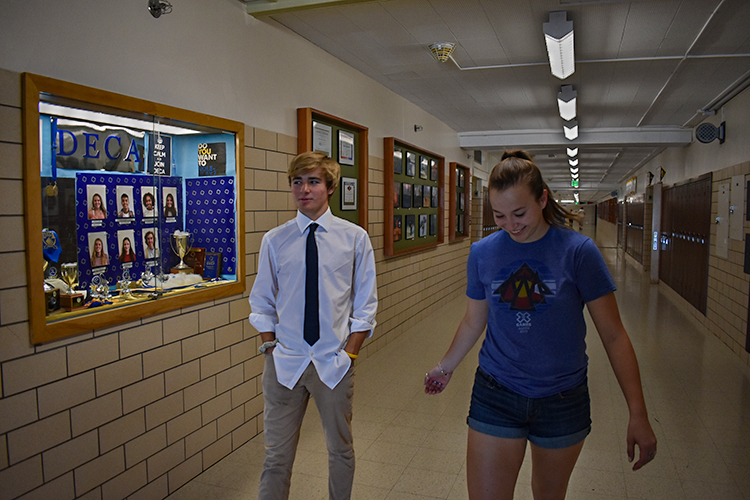 Students at Thomas Jefferson have a variety of preferences when it comes to attire (left: Ryan Moe; right: Ella Stephens). photo by AJ Domagala

Students and administrators have diverse opinions on the validity of a school dress code.

Thomas Jefferson High School is awash in style. Students don every variety of apparel, selecting their outfit to exhibit culture, campaigns, or couture. Even the staff join in on the fun, sporting jerseys to support their favorite teams and taking spirit week costumes to the next level. TJ’s hallways could be compared to a runway where backpacks are a must-have accessory. Wardrobe creativity is treasured at TJ, but it is also regulated by the school dress code. Though dress codes are customary in most academic institutions, students and staff have not yet come to a consensus on whether the mandates support or suppress an academic environment.

“Where the issue lies is that some students believe [the dress code] is unfair and unreasonable,” explained Emily Lupo, the new Restorative Justice Educational Counselor at TJ. Though the conversations Lupo has had with dress code violators have been constructive thus far, the new dean realizes that there are still those who disapprove of the restrictions. “Every situation is different and every student is different,” Lupo acknowledged. “However, students are in high school now. They are old enough to be aware of the rules and self-enforce them when they get ready in the morning.” Lupo’s expectations are rebuked by students who believe that their right to expression is violated by the limitations of the dress code.

“I don’t think [the dress code] is important at all,” asserted junior Ashlee Taylor. “We are in public school for a reason: to express ourselves and wear what we want to wear.” Many families choose public schools for their political independence. Unlike private schools, government-owned institutions cannot presuppose religious or cultural stipulations. Forcing students to comply with nonsecular edicts on federal or state property violates the first amendment. Under certain pretexts, a dress code can appear to effectuate that violation. Monotheistic faiths have historically preached modesty in regards to appearance; are dress codes a relic of the days when church was not separate from state? School administrators argue otherwise.

“I think having an agreed upon set of norms is good—whether it is in a meeting, a school, or anywhere,” Principal Michael Christoff contended. Dress codes are not unique to schools. The majority of businesses have some sort of clothing requirements. Lupo added, “We are trying to teach students how to become young professionals and how to dress in the workplace.” Traditional business attire is much stricter than DPS’s policy. Even for those looking to pursue a trade or mechanical career, dressing mindfully can be crucial to safety and productivity. Junior Athiang Ater concurred, “I think [the dress code] has a function. High school is meant to get you ready for your forthcoming life.” For some, choosing one’s clothing with care demonstrates respect for the facility. Dressing the part can show a student’s appreciation to have the opportunity to acquire an education—a privilege Americans frequently take for granted. Still, several students believe that the dress code effectuates more than preparing teenagers for the future.

“It is so sexist,” attested Taylor. TJ’s policy, which states, “the following items are deemed disruptive and destructive and are not acceptable on school grounds,” has been perceived as implicitly targeting women. Social stereotypes frequently label young men as mindless goons unable to control themselves in the presence of a woman. Girls, meanwhile, are taught that it is their duty to accommodate the “boys will be boys” standard and cover up. Common sense refutes these hackneyed ideas: teenagers are more than just a barrel of hormones. They attend school to receive an education, and deserve to be treated as such. Individuals are responsible for their own actions. “You’re telling me I can’t wear a tank top because my shoulders are going to distract a male when he should be paying attention to the teacher?” demanded Ater. “That is not fair at all.” The propagation of the idea that a woman’s clothing choices make her responsible for how others treat her espouses the objectification and oppression that has hampered the women’s rights movement for decades.

The school is not blind to the concerns of its students. “It can be difficult for students who identify as female,” conceded Lupo. “I also identify as female. To those students, I just say, ‘I like your outfit. I think it looks great. It is just not appropriate for school.’” Christoff has set plans in motion to give students more of a voice in the matter. “My plan this year is to pull small groups, on a purely volunteer basis, and eat lunch with them every month or so.” The regular luncheons would give Spartans the opportunity to offer their feedback on how they feel about the happenings of the school. The administration can get a clearer view of the student perspective concerning dress code. “I’m trying to give the kids more voice because the reality is that the school is for them, not me,” the principal explained. “I’m just in charge of making sure everything runs smoothly and that every kid is getting the best education possible.”

A common complaint of students is that the dress code is discriminately enforced, targeting certain demographics more than others. “If there is a dress code, it needs to be equal,” challenged Taylor. “If there is a boy wearing a tank top, nothing happens. If a girl is wearing it, they get dress coded as soon as they walk through the door.” Christoff claims that the faculty’s goal is to be as inclusive as possible, but this objective does not always play out as planned. “There are going to be gaps in communication,” he admitted. “We don’t want the policy to seem one-sided against females or transitioning students.” According to the American Civil Liberties Union, dress codes are legal as long as they do not “treat boys and girls differently, force students to conform to sex stereotypes, or censor particular viewpoints.” If the administration can ensure that the dress code is enforced in an unbiased, respectful manner, students’ rights would not be violated.

With time and commitment, it is possible that students and administrators can work together to build a policy that satisfies every member of the TJ community. Students and teachers all want the same thing: to contribute to the next generation of educated, responsible, and kind individuals. Collaboration to improve the TJ dress code policy could be the first step along the path toward building a powerful bond between students and staff—a connection that would guarantee every student’s access to a just and effective education.