Dribbling, Diving, and Doubling Down in a New World 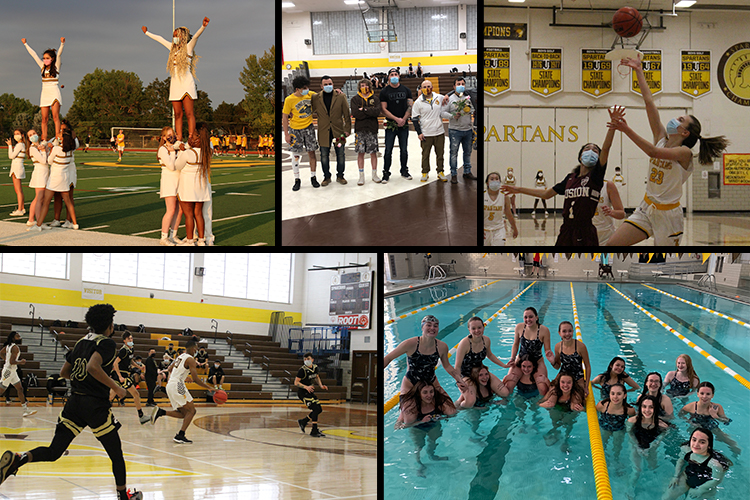 Similarly to just about everything that has happened over the past 12 months, TJ sports have experienced a lot of changes. Some of these changes are small, while others have drastically altered what the sport looks like. As the school year kicked off, there was uncertainty as to what sports would look like. Luckily, CHSAA (Colorado High School Activities Association) arranged a schedule that allowed certain sports to have their seasons in the fall due to the nature of the sports. The association chose sports they believed to have the lowest risk of transmitting the virus, specifically those that were outdoors and distanced by nature. CHSSA labelled these sports “Season A.” Then, from October through the end of winter break, no high school sports were allowed to occur. Once January began and the second semester kicked back into full gear, “Season B” sports were allowed to begin. This included girls swimming and diving, girls and boys basketball, and wrestling. TJ was no exception to the Season B start date. Spartan athletes were eager to jump back into their winter sports, even though they would look a lot different than they had in years past.

Girls and boys basketball takes place during the winter months each year. In a typical year, preseason practices would start up in November and the teams would compete until the playoffs in February. However, a non-traditional year called for a non-traditional season for the TJ boys and girls basketball teams. Each team was allowed to play 11 games this year, not including playoff games. This was a big change from their typical 25 games. While the teams were allowed to travel to other schools to play games, no one was allowed in the stands. Senior Avery Shunneson said this was one of the biggest differences from his boys season last year. “It’s unfortunate not having anyone cheering but I’m just thankful that we are able to play.” In addition to the empty stands, the teams were not allowed to ride together to and from games. Lauren Simasko said this was one of the hardest parts of the season for her. “I really missed this because it was a way to get to know our teammates better and spend time together before the game,” she said. Though the boys and girls basketball season looked very different for the 2021 season, there were some positive changes. The teams were able to livestream all their games, meaning that extended family and friends could watch the teams compete. The teams also felt that they grew closer with each other, as coming to practices and games was one of the few social interactions they were able to have during this school year. Both Shunneson and Simasko concluded that while this year brought many changes to their season, they learned not to take things for granted and to appreciate the season they did get.

Girls diving experienced the most change out of all the winter sports at TJ. Instead of a dive coach for each high school team, all the DPS divers shared a single coach. The girls were split into two cohorts, and each cohort practiced twice a week. They competed against each other at each meet, though the girls had significantly fewer meets to learn new dives and prepare to dive at the league and state meets. This was one of the most stressful parts of the season for many of the girls. Even with the few meets the girls did have, they were able to get really close as a team. “Because we only had one coach, I got to meet and become friends with the girls from the other schools, and we have all become super close,” said junior Denise Hanselman. Even with all the changes to their season, the consensus was similar to that of the basketball teams. Everyone was grateful to have a season. “The biggest lesson I learned this year is to really take advantage of practice and to work harder than I have ever had to,” Hanselman explained.

The girls swim team started up their practices as soon as they were cleared to practice. In a normal year, they would start preseason practices in mid-October. This means their preseason spans about five to six weeks before the actual season starts. This year, the girls were only in the pool for their real season for six weeks. “This made athletic goals difficult to accomplish this season,” said senior Laura Zelenka. The meets also looked very different from a typical year. The first five meets were virtual, meaning that the TJ swimmers swam in their own pool and their opponent swam in their own pool. Then, times were combined to declare the winning team. Even with their hard work, the girls found it hard to compete without swimming directly alongside their competitors. Despite this, the girls still found ways to make the best out of their unusual season. Zelenka explained that the whole team was more motivated to bond as a team and that they each came out of the season with a lot of new relationships. Like basketball and diving, the girls were just glad to have a season and were thankful for each practice and meet, no matter how out of the ordinary they were.

The TJ wrestling team experienced the full extent of the pandemic’s effects on sports. Within the already shortened season, their team contracted COVID-19 and was put into quarantine for two weeks. This made maintaining their training very difficult. Additionally, the boys struggled to find opponents to compete against. Because of the close-contact nature of the sport, many schools did not feel comfortable bringing their teams to compete. This meant that many matches were canceled or forfeited. Senior Bodhi Ellzey explained, “Since wrestling is based on weight class, you have to have an opponent that is your weight. If that wrestler got coronavirus or decided not to wrestle this year, you wouldn’t get a match. Due to these limitations we got very few matches this year and most of them were forfeits because there was no one to wrestle.” Still, even with the lack of matches and the two week quarantine, the wrestlers learned to work even harder and to be grateful for each opportunity they had to wrestle.

The Season B sports were faced with new challenges everyday. Despite this, the teams were able to persevere through the season. Each athlete came out stronger than before and learned a huge lesson about gratitude. While their seasons did not look anywhere near normal, the athletes found a way to appreciate the practices, games, and experiences they did get. They were able to accomplish a lot in a little bit of time and were grateful for each moment of it.