Environmental Hope Within the Chaos 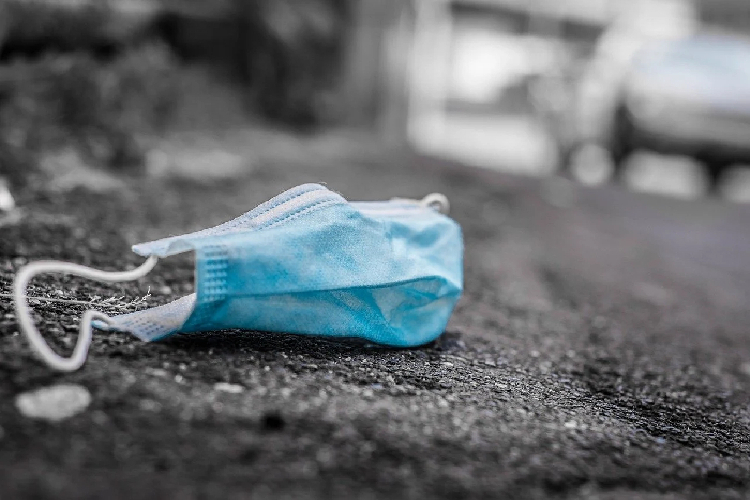 Masks have been more commonly found by divers floating in our oceans since the pandemic began.  photo courtesy of pixabay.com

The COVID-19 pandemic has resulted in both positive and negative environmental changes.

The pandemic has caused everyone’s lives to take a drastic turn.  The changes in lifestyle have resulted in changes to the environment as well.  There are many ways that the pandemic has impacted the environment, both positively and negatively.  Once filthy water has become crystal clear due to decreases in traffic, and the improper disposal of masks and gloves has exposed how humans have affected the Earth.

While people are forced to stay home, nature has begun to bloom.  In the absence of city crowds, wildlife has been allowed to roam free and explore the city.  Mark Richards, the owner of the Hotel Landsdowne House, watched as mountain goats roam the silent streets of his town on March 31st.  He commented, “They sometimes come to the foot of the Great Orme in March, but this year they are all wandering the streets in town as there are no cars or people.”  In South Africa’s Kruger National Park, lions now sleep peacefully in the roads since there are no cars actively driving on them.  Isaac Phaahla, the South African National Parks spokesman, claimed, “Lying on the road during the daytime is unusual because under normal circumstances there would be traffic and that pushes them into the bush.”

Along with unusual animal behavior, Venice, Italy’s Grand Canals have become crystal clear due to the lack of traffic and constant visitation.  A spokesperson for the Venice Mayor’s Office says, “The water now looks clearer because there is less traffic on the canals, allowing the sediment to stay at the bottom.  It’s because there is less boat traffic that usually brings sediment to the top of the water’s surface.”

Air pollution has also been reduced as a result of the pandemic.  Nitrogen dioxide levels over Asia and Europe have shown an extreme drop since lockdowns were issued.  This not only positively impacts the environment but benefits human society as well.  The World Health Organization describes nitrogen dioxide as “a toxic gas which causes significant inflammation of the airways.” The decrease of nitrogen dioxide in the air has allowed for the air quality to be better in these areas, helping those with health sensitivities to breathe easier.

Since beaches were closed and completely empty, organizations like Beach Co-op have been able to successfully hold clean-up operations.  Aaniyah Omardien, the founder and director of the Beach Co-op in Cape Town, stated, “It was a rare opportunity to meticulously collect litter arriving every day on two 400 meter stretches of sandy beach, for ten consecutive days without the impact of people adding to or removing litter.” Without excessive human activity, litter has been able to be collected and disposed of properly.  This leaves the beaches clean and ready for when it is safe for people to return to them.

Even so, the pandemic has had its fair share of negative effects on the Earth.  The use of plastic has rapidly increased as a result of the pandemic, causing our oceans to be filled with more plastic waste. Since masks have become a part of daily life, they are often seen littering in a variety of locations, like the park, the street, and the ocean.  Laurent Lombard of Opération Mer Propre claimed, “Soon we’ll run the risk of having more masks than jellyfish in the Mediterranean.”  Disposable masks are made from a material known as polypropylene, which is a type of plastic that is not eco-friendly.  Gloves have also been found in large amounts by divers attempting to clean the oceans.  However, these are not the only plastic materials that have become more common during these times.  Plastic packaging for online orders and grocery bags are now more commonly used since the majority of people are deciding to stay at home.  Restaurants are either limited in dining space or closed, causing people to go to the grocery store more often for their food.  Unfortunately, the increase in sales has forced certain areas to overturn disposable bag bans and begin relying on single-use plastics.  In order to keep up with the supply and demand, grocery stores can cheaply and quickly produce plastic bags. Some states have chosen to delay confirming a ban on single-use plastic bags.  For example, lawmakers in Maine voted to push back the state’s plastic bag ban until next year as part of a package of emergency coronavirus measures.  Similarly, in New York, Senator John Flanagan called for the state to suspend the plastic bag ban that went into effect on March 1st.  The pandemic has not only caused humans to encounter more substantial conflicts but has also resulted in the increase of nonbiodegradable materials.

The changes COVID-19 has brought to people have not only shown how many aspects of life are taken for granted, but also how humans deal with a crisis and how much of an impact it has on the planet.  Without the constant crowding of streets and tourism, canals become clear, the air becomes healthier to breathe, and wildlife is able to roam free.  However, the increase in disposable products, such as plastic, may cause significant damage to the environment.  The pandemic has merely been the event to expose the truth about how much of an impact people have on the environment.