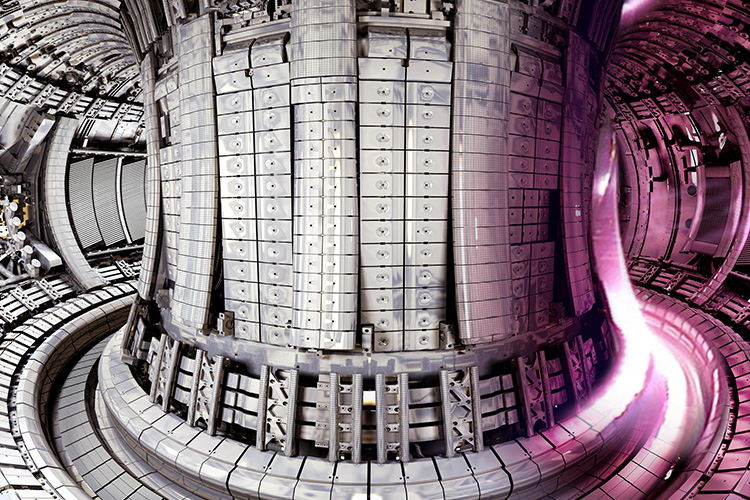 The JET machine is the leading technology towards creating nuclear fusion.  photo by EUROfusion

In February of 2022, members of the Joint European Torus (JET) Laboratory made much-needed progress toward creating energy through nuclear fusion. Located at Culham Center for Fusion Energy, the JET machine has been the cornerstone for fusion technology. Its purpose is to recreate the process that our sun and other stars use in order to sustain large amounts of energy for long periods of time. The appealing characteristic of nuclear fusion is that it produces less waste compared to its counterparts. Many supporters of the project believe it can help with carbon emission levels and reduce the effects of climate change.

Nuclear fusion focuses on the pursuit of “infinite” energy. The process revolves around making two atomic nuclei charges combine with one another. The main issue is that both of these charges are positive, creating a natural need to repel each other. The solution is to place the atoms at high enough temperatures so the atoms crash into one another and fuse, which triggers two reactions. One reaction is the contact of the atoms, and the second is the actual fusing of the atoms. Both these reactions let out an enormous amount of energy, but the conditions needed to trigger such reactions are much more difficult than they sound.

For many years, scientists have been working towards creating the perfect environment for nuclear fusion. Due to the fusing of nuclei being a chain reaction, all one has to do is trigger it to get the process started. This leads to nuclear fusion being far much safer as it can be controlled much easier. Triggering the fusing process is delicate and it is difficult to maintain because of all the variables at play. Achieving the perfect conditions for fusion requires many materials that can withstand extreme temperatures, especially if it is for a long period. Scientists must also find a way to collect the energy output to actually benefit from the reaction.

So what’s the big deal? The JET team has successfully been able to produce 59 megajoules of energy in a total of five seconds. It may sound intense, but the output of the machine was not actually that high. The purpose of this trial run was to validate design choices and to see if it was possible to sustain energy production. Dr. Joe Milnes, the head of operations at the laboratory, commented to the BBC,  “we’ve demonstrated that we can create a mini star inside of our machine and hold it there for five seconds and get high performance, which really takes us to another realm.” Having actual data on an idea that seemed so far in the future has caused much hope and positive outlooks for renewable energy sources. It is a major step toward reducing human emissions and the fight against climate change.