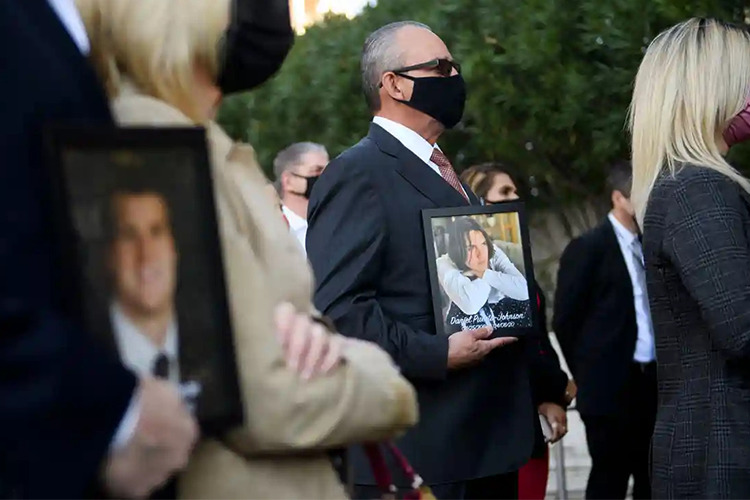 Above are the family members whose relatives died from fentanyl outside the Royal federal building in Los Angeles, California. photo courtesy of Patrick T Fallon

In the fourth wave of an unending opioid epidemic, senior citizens are the new victims of addiction and overdose.

For years, opioids have caused millions of deaths in the United States. According to the Center for Disease and Controlling, types of drugs that influence the number of people affected are described in ‘waves’ of epidemics from 1990 to today. The first wave of opioids began in the 1990 and continued to increase 1999. The main drugs used in this time were cocaine and methamphetamines. The second wave of overdose deaths began in 2010, with rapid increases in overdose deaths involving heroin. The third wave started in 2013 with a significant increase in overdose deaths involving synthetic opioids, mainly illicitly manufactured fentanyl. The market for illicitly manufactured fentanyl continues to be found in most drugs and led to what researchers are calling a fourth wave. This fourth wave is identified by an increase of opioid related overdoses in an older population.

During the first three waves of the epidemic, the central opioids abused were cocaine, methamphetamines, and heroin. What is now concerning scientists and government agencies is the introduction of fentanyl into accessible drugs. The effects of deadly fentanyl in drug supplies result in a new demographic of people overdosing and abusing opioids, which is shockingly senior citizens. To understand why fentanyl is causing disproportionate deaths in an older generation, people look at the change in opioids. More than “42% of pills tested for fentanyl contained at least two mg of fentanyl, considered a potentially lethal dose,” according to The Drug Enforcement Agency (DEA). The introduction of synthetic fentanyl to drug supplies led to a 38.1% increase in deaths by overdose in 2021.

At first glance, the introduction of fentanyl-related overdoses seems similar to other waves of the opioid crisis in the past. The widely accepted reason for overdoses during the introduction of the opioid epidemic was that people in their thirties and forties became addicted to their painkillers. At this time, doctors were over-prescribing addictive substances such as morphine, oxycodone, and hydrocodone. The result of overprescribing was that patients became increasingly dependent on these substances. Actions to alleviate medical-related overdoses resulted in doctors following strict enforcement of prescriptions and additional education about opioids when they prescribe them. However, the restriction methods of legally accessible opioids only momentarily cut off the number of overdoses.

Despite scientific and enforcement agencies’ best efforts against opioid use and prevention the fourth wave of opioid-related deaths and overdoses plagues the nation because of the introduction of synthetic fentanyl into the illicit drug market. Doctors are not prescribing this fourth wave of fentanyl; instead, the patients cannot afford the narcotics that their doctors are prescribing to them. Researchers from the CDC found that most people in their seventies were beneficiaries of Medicaid/Medicare. Advocates for free healthcare in the U.S. critique the effectiveness of Medicare in lowering the costs of expensive pain medications that senior citizens need. According to The Commonwealth Fund, senior citizens in “the U.S. have the highest rate among eleven high-income countries of not taking prescription drugs because of cost.” The change in demographics can be attributed to people over seventy because they are more likely to buy narcotics online as replacements for expensive prescriptions not covered by their medical insurance.

Nevertheless, why are so many seniors dying of synthetic fentanyl if they are buying their same opioid prescriptions online? Online black market sales of opioids are packaged and marketed as authentic and cheaper alternatives to opioids prescribed by doctors. But these products are not made in the United States and are not regulated by the FDA. Instead the DEA reports that more than 73% of the imported pills from China and Mexico are laced with fentanyl. The introduction of fentanyl into the online black market is partly due to its highly addictive and potent nature. The DEA states that the intended use of synthetic fentanyl was as a painkiller to treat patients with cancer for chronic pain. Fentanyl is similar to other opioids but is 80 to 100 times stronger than morphine. Consequently, this synthetic opioid is more addictive and deadly than any other opioid. In addition, the potency of fentanyl means that drug manufacturers could use small amounts of fentanyl in supplies of different drugs to sell more illicit products at less cost to them. The pills marketed to senior citizens as cost-effective alternatives are laced with fentanyl.

The older generations unknowingly take fentanyl in deadly doses and often die even if paramedics are called. Paramedics use the medicine Naloxone to reverse overdoses from fast-acting opioids rapidly. However, the synthetic fentanyl used in the black market was developed as a long-lasting opioid. While Naloxone is useful for stopping overdoses with shorter effects, pharmaceutical researchers Ronald B. Moss and Dennis J. Carlo notes that “multiple sequential doses of Naloxone have been required in a certain percentage of opioid overdoses due to fentanyl.” Unfortunately, these anti-overdose medicines are still not always enough to counteract overdoses of fentanyl, especially in older generations who have weaker metabolisms, and fentanyl overdoses are often fatal in people over seventy. There are many inherent risks to opioid use, but according to the Substance Abuse Confidentiality Regulations, doctors and pharmacists must disclose the risk of addiction and suggest that the patient buys Naloxone. None of these risks are discussed or disclosed to patients when they order opioids off the internet.

Medicaid cannot cover senior citizens’ needs. The reason that people are dying from overdoses is no longer that doctors are overprescribing medications. Instead, the reason is that the deficiencies in the American healthcare system are forcing seniors to look for cost-effective medicines that are only available on the black market. As a result, senior citizens become the new victims of opioid abuse throughout the fentanyl epidemic. The number of people suffering from opioid addiction is not just a number. The number of opioid-induced deaths represents the number of real people and actual losses caused by deficits in the American healthcare system.