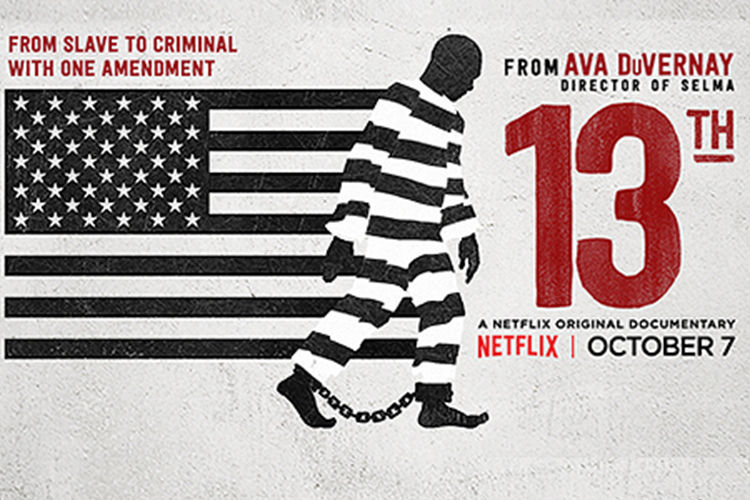 The artistic representation of the generational chains of institutionalized racism in the Netflix documentary cover. photo courtesy of Netflix

The documentary 13th leaves viewers with an abundance of emotions due to its intensity and truth, and I was no exception.

Filmmaker Ava DuVernay created the fascinating documentary 13th that was released to the public on October 7th, 2016. The award-winning film contains a multitude of speakers who investigate the United States’ criminal justice system’s mass incarceration and its attack on African Americans. The documentary 13th was named after the 13th amendment in the United States Constitution, which abolished slavery and any unwilling servitude, with the exception of when one is incarcerated. This documentary was something I had wanted to watch for a long time, but only recently had the opportunity to watch for my African American History course. It was immediately captivating, from the information and speakers down to the music they used. It is no secret that the criminal justice system in this country is terrible, at best, and extremely biased. In this documentary you see the statistics and the numbers of black men and women who fill up prisons in the United States more and more every year. It is extremely eye-opening, showing the impossible odds that are stacked against the black community in the US.

The film showed how throughout history, deliberate acts have been made toward African Americans to get them targeted by law enforcement. For example, it talked about how the “different” drugs of crack cocaine and powder cocaine were used to purposely give more jail time to people of color, rather than white people. Cocaine in powder form, used primarily by white people, is not penalized as harshly. Crack, in solid or rock form, used primarily by people of color, purely because of the form it is in, not because it is any less addictive or harmful to communities, is viewed as a more harsh drug. As the documentary continued, it became harder to watch, seeing the reality and the horrifying statistics, including that African Americans comprise an estimated 13.4% of the United States population but make up 38.6% of the prison population, or the fact that it is estimated that one out of every three black men will go to prison, whereas for white men, one out of seventeen will go to prison. In the back of my head, I knew all these things were true. I knew that the system was more than broken, and that the oppression of the black community was real, but you compartmentalize, move on, push it to the back of your brain so that it does not sound as bad or the reality of it fades, yet watching this documentary made it impossible to “forget” or simply move on with the rest of my day.

After watching, I was sitting in my room; it felt like a lifetime had gone by, not a simple hour and 40 minutes. I felt scared, scared that this was real; there are innocent people spending time in a place that was built to break someone in 30 days, not just their bodies, but their minds. In the documentary, there is a statement made by Van Jones: “One out of four human beings with their hands on bars, shackled, in the world are locked up, here, in the land of the free.” This quote stayed with me. It was like pulling the facade off of the country, this false sense that this is the safe place, a place where everyone is accepted and has equal opportunity. Under the veil, you see how ugly this country really can be. Watching it all, it felt like a lifetime of disappointment, because this country was never great; it was always flawed by the hatred of white supremacy and awful to the people who made it, so I sat in my room, struggling with the reality that as I sat there, somewhere, there was a man or woman sitting in a place that reduced them to a number, broke their body and mind so they would do as they were told. It began to physically hurt, as I saw how broken and how deep the evil had gone in the country I was taught to love without question, to trust without question, to believe in without questions.

The documentary left me with something that could not be forgotten or pushed to the back of my mind; it left a spark, something that moved a part of me. I refuse to be overwhelmed and stopped by what might seem like an impossible task, something that is so corrupt that it cannot possibly be changed; I will not think this. I will instead think how I can inspire others, so then what first seemed impossible for one person is something possible with the help of everyone inspired. Please watch 13th, and no longer live in the false reality of the “perfect America.”