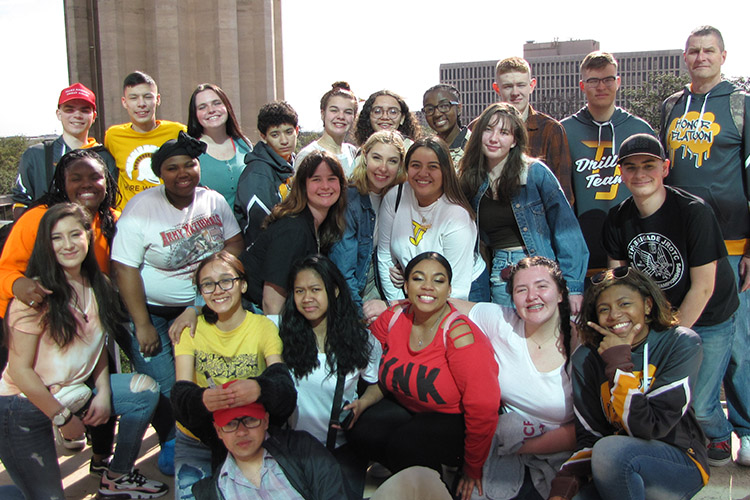 TJ's Honor platoon(HP) and Drill team posing for a group picture outside the Henry B. Gonzalez Convention Center. photo by Nadia Richard

Thomas Jefferson’s Junior Reserve Officer Training Corp (JROTC) drill teams competed in the Texas Regionals Drill Meet in late January. By competing, the teams were trying to qualify for the next level of drill meets in Richmond, Virginia, where they would compete on a national level. ROTC competitions involve so much more than just five-minute performances. From mastering the perfect bun to synchronizing a complex routine, competing in Color Guard and HP is a grueling yet rewarding experience.

At 5:30 p.m. on Monday, January 20th, TJ’s drill teams arrived at the airport where they boarded a flight to their competition. The teams did not arrive in San Antonio, Texas until 10:00 p.m. (9:00 p.m. in Denver, Colorado). Reaching the hotel was not a problem, considering that the hotel was only five minutes away. The next morning, HP and HP Color Guard practiced for the last time before they went onto the floor the next day. Drill team Color Guard were also practicing and performing, but due to some last minute changes, the team could no longer compete. However, that did not stop the team from helping out in any way that they could.

After practicing for about two hours, the teams stopped for lunch at Whataburger before they made their journey to the convention center where the competition was going to be held. The convention center was not much different from past years, aside from the fact that this year, there were not as many teams who chose to compete. Most teams planned to compete at Nationals, which will take place in Richmond, Virginia. When the Spartans arrived at the convention center, they set up their tents and all other necessities for the competition. The process was quick, with the Drill Team doing the majority of set up while HP practiced on the floors to gauge their distance and space. After doing an assiduous tour of the performance floors, it was time to wrap up the day at the convention center.

At approximately four in the morning, the day began. HP was required to wake up extra early to do hair. Every girl’s hair had to be gelled down and sprayed into a firm crisp bun that would harden over the course of the day. Once that hour-long process was complete, everyone ate breakfast and loaded up the vans. Due to the fog and rain, TJ was one of the first teams to arrive.

The teams had already set up everything, so for a long period of time everyone waited around until Color Guard performed. Once they performed, everything went by in a blur. Honor Platoon Captains, seniors Kenasha Riggs, Marlene Romero, and junior Lydia Swaim, faced challenging tasks. Even Riggs, the captain for inspection, was intimidated by the ladder climb-up. “Even though I have been doing this four years now and I’ve been in inspections and I’m the commander for inspection, I still get nervous,” she admitted. “Every time we have to go on, and even though this drill meet is not a very intense one to the point that [the judges] are not yelling at us, it is still very intimidating.” Riggs did not want her team’s hard work to go to waste. “I just hope that we don’t have any mess ups and that the girls are being confident in themselves.”  The HP event was predominately dedicated to knowledge questions relating to aspects of being a ROTC cadet in the United States. It featured other categories as well, but it was primarily based around the cadet. Preparing for the event was very nerve-wracking, and the vast majority of the cadets were worried due to the stress. After the marching, which was essential to the competition, the actual inspection did not take long.

Swaim took the lead for regulation. She had just recently been promoted to team captain, so this was her first competition where she was going to be commanding the team. Regulation denotes marching under commands. “Being a captain is a really big deal for me. I feel like I worked hard for this position. I’m super excited for commanding this year because my team has worked hard and I feel as though that we are going to accomplish our goals,” Swaim enthused. “However, what I feel today is a mixture of nervousness and excitement. I know the routine, but sometimes I start to doubt myself. I have to check myself and just know that I have to be confident and lead my team with pride,” explained Swaim.

Before going on the floor, Swaim led the team in a few practice trials to make sure everyone was doing every move correctly and not messing up or making small errors. When it was time for Swaim to go onto the floor, the team’s apprehension was at its peak. Everyone was determined to impress the judges, so Swaim poured her heart out into the commands.

By the time Swaim and her team were off the floor, the team was overcome with emotion, praying that they did well. Once that was over, both HP and Color Guard gathered to take a group picture.

An hour had passed before it was time for HP’s final event: exhibition. Romero was getting ready for the last event of the day before the succeeding award ceremony. At the time, she exclaimed, “I personally am excited for exhibition. Having my girls being around allows all of us to feed off the good vibe, and we always like to show everyone that we are from Denver and that we can make it here like all the Texas teams.” Having been in exhibition for four years, Romero was full of confidence. As for Color Guard, the senior was a little worried. “My biggest fear is messing up in color guard since I did just recently switch my role from being the flag to the rifle, but on a lighter note, I’m very confident in our exhibition performance,” she noted.

Romero and HP went on to perform the most entertaining presentation of the week. The adrenaline was high, and it was clear  that the team was trying their best. By the time HP was off the floor, the audience could see the excitement and sweat rolling off their faces. Their diligence paid off for the last event.

By the time the award ceremony started, it took all the strength the team could muster to stand up straight.When the ceremony began, the placing announcements rang in every teams’ ears. “And for first place in Unarmed Regulation Drill. . . Thomas Jefferson High school from Denver, Colorado!” Once those fifteen words left the judges mouth,  TJ began to cry tears of joy. Swaim, the captain for Regulation, had just taken her team to first place in regulation while Romero had taken her team to fourth place in Unarmed Exhibition Drill. Overall, TJ took ninth place out of twenty-six schools, which was an incredible accomplishment for TJ. Once the scores had gotten back to the instructor, Major Dennis Campbell, Campbell announced to the teams that they had qualified for Virginia and would be leaving for Virginia in March. The news was phenomenal and everyone was beyond proud of their accomplishments. When the Spartans back in Denver heard the news, everyone congratulated the team and wished them luck. At the time, the school believed that the excitement of the 2020 ROTC season was not yet over. “I’m most excited to see all the teams we’ll never see other than at the  National Championships. I’m also excited to see us stack up against the teams that beat us in Texas,” Campbell explained. Though the team continued to work tirelessly to prepare for Virginia, their season came to an untimely close due to the spread of the coronavirus pandemic. Still, the hard work and camaraderie displayed by the 2019-2020 Thomas Jefferson ROTC team will never be forgotten.

TJ’s Honor platoon(HP) and Drill team posing for a group picture outside the Henry B. Gonzalez Convention Center. (Photo by Nadia Richard)