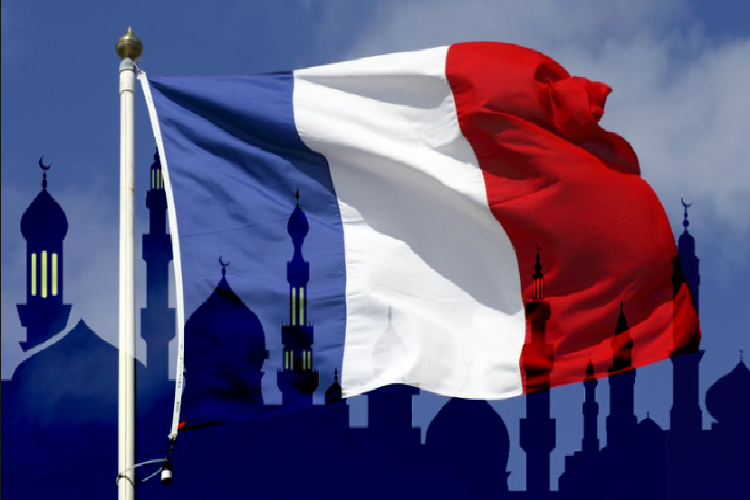 A graphic that has Mosques with the French flag in the back. graphic by Deqa Muse

France sparks a series of protests and unfortunate events with the republishing of caricatures of the Prophet Muhammed (Peace Be Upon).

In Islam, it’s prohibited to depict the Prophet Muhammed (PBU) to avoid the temptation of idol worship. This teaching comes from the Hadith, which is a collection of traditions, sayings, or teachings of the Prophet Muhammed (PBU). The teachings are essential to understanding Islam because they are a combination of Islamic knowledge and law. In a CNN article, Akbar Ahmed, a member of the Islamic Studies Department at American University, stated, “The prophet himself was aware that if people saw his face portrayed by people, they would soon start worshiping him. So he himself spoke against such images, saying ‘I’m just a man.’” One of the reasons Muslims abide by these specifications is because there are many religious rulings made by Islamic scholars that relay the same message. This is also the reason why the events that occurred in early September deeply offended Muslims worldwide. The satirical Charlie Hebdo magazine republished caricatures of the Prophet Muhammed (PBU) that led to the boycott of French goods, protests in Muslim countries, the stabbing of two people, a beheading, and more.

Tensions rose after Abdoullakh Anzorov, 18, decapitated Samuel Paty, 47, a teacher that showed cartoons of the Prophet Muhammed (PBU) during a class on freedom of speech. Anzorov grew up in France, which is why this horrific crime was also seen as an attack on the foundation of the public education system and the nation’s ideals. Two days after, on October 18th, crowds gathered across France in honor of Paty. These caricatures were projected onto government buildings to pay tribute to Paty for a couple of hours on the evening of October 21. While the nation mourned, officials began their crackdown on radical Islamism through a series of raids, closures, interrogations, plans, and proposals. On September 25th, the nation was once again the victim of another bloody crime as a Pakistani asylum seeker stabbed two people outside the former office of Charlie Hebdo. France once again took a strong stance against extremists and worked to combat these violent acts of aggression.

French officials have defended the right to republish these cartoons, some have even stated that they would pass them out to high school students in the form of books in an attempt to defend the nation’s ideals. Originally, these cartoons were published in 2005 by a Danish newspaper but were denounced by the head of state for provoking and disrespecting Muslims. The same images were reprinted by Charlie Hebdo in 2006, which gained criticism from the Muslim community. At the time, President Jacques Chirac (now former President) released a statement saying, “Anything that can hurt the convictions of someone else, in particular religious convictions, should be avoided. Freedom of expression should be exercised in a spirit of responsibility.” However, today these same images are widely accepted by French citizens and their elected officials. As the Muslim population rises in France, political secularism, the separation of state and church, is heavily enforced. This concept stems from a 1905 French law that lays down the separation of church and state making France neutral in matters of religion. The idea was to have all religions in France respectfully exist side-by-side under a neutral state as the law is based on individual and religious freedom. Yet, in 2004 a ban prohibiting Muslims from wearing hijabs (religious headscarves) at state schools was introduced. In 2011, France became the first European country to ban Muslim women from wearing a niqab (full Islamic veil) in public places. According to the French government, niqabs “oppressed” women, even though it’s not mandatory that Muslim women wear them and is a choice many make for themselves and their faith. French secularism criticizes religions, but not their believers, which can be hard to differentiate as many Muslims feel like the republication of these images is a personal attack and find them profoundly insulting. As tensions rise, French Muslims feel stigmatized and alienated by their own country.

Furthermore, the government’s determination to defend these images has sparked a number of protests among Muslims in countries like Pakistan, Libya, Syria, Lebanon, Afghanistan, Bangladesh, Turkey, Palestinian territories, and more during the month of October. In the Gaza Strip, the militant Hamas group organized protests at mosques across their territory. In an article written by The Guardian, Fathi Hammad (a Hamas official) is quoted to have addressed a crowd at one of the demonstrations by vowing “to stand together to confront this criminal offensive that harms the faith of about two billion Muslims.” There are similar messages given at other demonstrations that are held across the globe as Muslims boycott French goods and urge their governments to boycott all French products as well. Since October 25th, stores in Kuwait, Jordan, and Qatar no longer sell French products. Turkish President Recep Tayyip Erdogan has been the face of the movement to boycott French products and condemned Charlie Hebdo magazine for what he called “a grave insult to my prophet.” On October 28th, the magazine published a caricature of Erdogan lifting a Muslim woman’s skirt in his underwear. The following day, Turkish politician Fahrettin Altun wrote in a Twitter post, “We feel we owe no apology to anyone for expressing our strong opposition to racism and xenophobia. We categorically deny any effort to associate us with any kind of violence.” Political leaders in Turkey have accused President Emmanuel Macron of marginalizing French Muslims and disrespecting their right to freely practice their religion. President Erdogan criticized President Macron, saying he needed a “mental [health] check.” As a result of the escalating tensions, France has recalled its ambassador from Turkey.

President Macron has proposed a law that allows the government to monitor mosques extensively to fight against a phenomenon he calls Islamist separatism, which he believes to be a threat to the French Republic. In his proposed law, homeschooling would no longer be allowed and Muslim associations and mosques would be under the threat of a shutdown if they promoted any message that contradicted France’s core values, like freedom of speech. Muslim leaders would have to sign a charter vowing to respect and uphold these values. Under this proposed law any Mosque or Muslim association that speaks out against these caricatures would be shut down, as it would be considered as opposing freedom of speech. The French government has been defending the caricatures of the Prophet Muhammed (PBU), considering it a form of freedom of speech. In a news podcast by NPR, Vincent Geisser, an expert on the Arab and Muslim world with the French National Center for Scientific Research, explained the issue. Geiseer stated, “The president is focusing on Muslims and implying that if there’s a rise in terrorism, then maybe it’s because Muslims aren’t secular enough, that if you’re a practicing Muslim, you’re somehow against French values.” This misconception and generalization of Muslims in France is the reason why French Muslims face Islamophobia and harsh treatment, as France has only ever associated Islam with terror attacks. Muslims around the world will continue to boycott French products until France discontinues the caricatures and rights the wrongs that were done.

*PBU means peace be upon. In Islam, PBU is how they address the prophet.