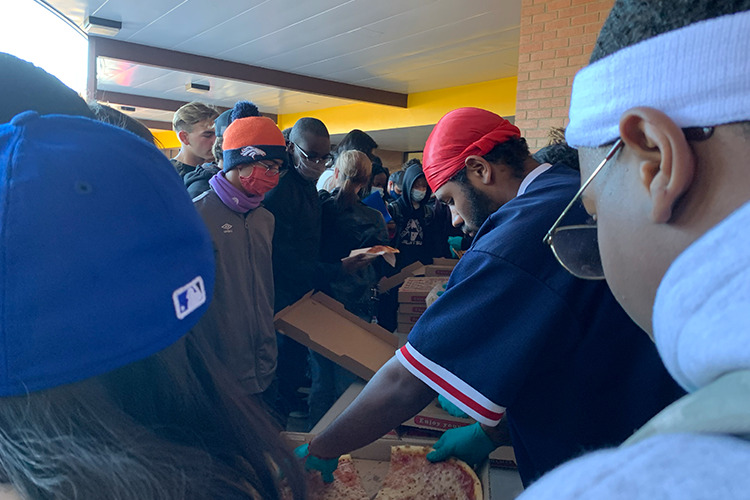 Students line up to get their free slices of pizza to start off their First Friday. photo by David Lopez-Vences

A new TJ event that occurs every first Friday of the month has students and staff winning prizes, listening to music, and enjoying free food.

November marked the start of First Fridays at TJ which contain shortened classes, announcements of prize winners, and an after school gathering with food and more prizes. The mastermind behind this new tradition is office manager Danyelle Charles, who wanted to uplift students who were having a hard time adjusting to in-person learning. Her idea was to motivate students and help staff by creating a fun event that takes the load off of coming back to school.

“It’s a day full of relaxation,” said Charles. To begin, the day revolves around a shortened schedule that ends the school day at 2 p.m.. The reason behind this is to help members of the TJ staff catch a breath of fresh air. Charles stated, “We’re having a shortage of substitutes right now, so teachers are covering classes where they’d normally have two planning periods. I thought it would be a way for them to leave at 2 p.m. to give them a break at the beginning of the month and to also give prizes.” Throughout the day, both students and staff hear prize winners and raffle numbers announced at the end of each period. These announcements created anticipation not only for the end of a class period, but for the chance of winning a prize.

Charles hoped to incentivize students to go above and beyond in academics. Students who showed growth in effort and performance in class were eligible to be nominated by their teachers to increase their chances of winning a prize. Students can be nominated as many times by their teachers which helps the push for effort after returning from a yearlong COVID hiatus. Although those who are nominated have a greater chance, it doesn’t limit prizes for them only. Charles stated, “Every student gets an opportunity,” she added, “ Any student who goes to school and comes to the event has one chance to win prizes.”

Prizes consisted of  different types of items such as backpacks, water bottles, and gift cards that were provided by a variety of sources. With the help of Danny Showers, the previous  Career Technology Education (CTE) Partnership Coordinator and BSA sponsor, Charles was able to write a letter to businesses which led to the donation of gift cards that ranged in value up to $100. Showers even donated on his own to add to the prize pool. In addition, Charles approached other establishments to help spread the word. “I actually took the letter to different restaurants in the community. I took the letter myself to Target and they actually donated the 100 dollar gift cards.” These gift cards were later given to the prize winners at the end of the day.

After school, tables were set up by different clubs alongside the free food that was catered for students in attendance. Charles mentioned, “There was a little bit of free food but I also wanted to open it up so clubs could have an opportunity to raise money. I was trying to think of one thing that could help everybody.” Many clubs participated which created a surreal opportunity and environment especially for newer ones. Kahdija Ali, a TJ senior who is a part of the new Muslim Student Alliance club, commented, “It felt really nice to be able to raise money for our club because we’re trying to get our club started so that we have enough money to do fundraisers.” Having another school event that allows the freedom of having fun really helps connect everyone after returning from an abnormal time in the year prior. She continued, “You can tell everybody was happy to be able to leave class early and hangout and buy stuff.”

December’s First Friday event incorporated new activities and prizes. Senior Coral Mendoza won a Chipotle gift card while playing “Guess That Song” courtesy of Kyler Jackson as the DJ. She stated “It felt nice to know that my lyrical knowledge finally paid off.” The excitement was evident based on people laughing and showing off their prizes with smiles behind their masks. The Spartan community is grateful for the innovative ideas that Ms.Charles brought to life during a difficult year.