Gambling on the Grammys 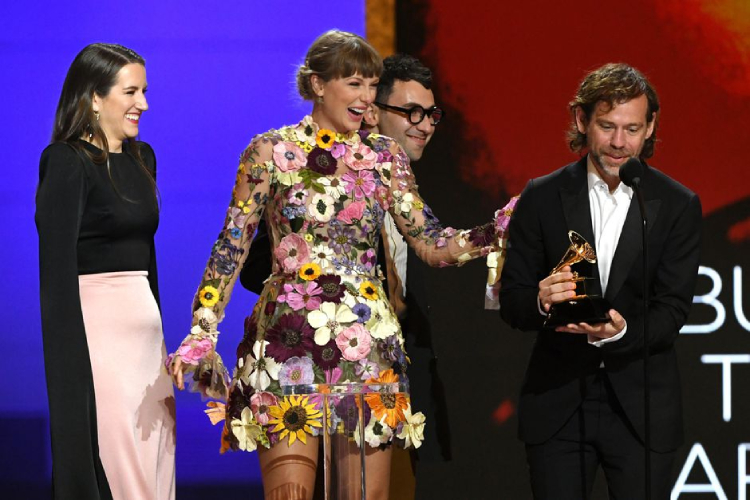 With a large variety of popular music being released in the upcoming year, the Grammy nominations for 2022 prove to be more competitive than ever.

With more than 80 categories and eight nominees per category, the Grammys have become an event that is a major milestone for musicians, artists, producers, and composers, regardless of their status. Despite the large number of complaints alleging unfair nominations for the Grammys in 2021, the competition for the 2022 awards began in September of 2020 and has only grown to be more competitive and reach a large variety of artists. The most recognized awards are known as the Four General Awards: Record of the Year, Album of the Year, Song of the Year, and Best New Artist; the four awards are not restricted to any genre. With a lot of new music already released and more announced to be released before the deadline for Grammy nominations arrives, there is a lot to be considered when looking at these four general awards.

The Record of the Year award is one of four prestigious awards; being nominated for and winning this award can completely change the course of an artist’s career. This title is often confused with Song of the Year, another category of the big four. However, these two are distinguished by the recognition aspect, as Record of the Year honors the performing artist and Song of the Year honors the songwriter. Record of the Year has currently been held by artist Billie Eilish for the past two years—in 2020 for her hit record “Bad Guy” and in 2021 for “Everything I Wanted.” While Eilish is definitely in the running for a potential third year of holding Record of the Year, she is met with extreme competition. The first major contender for this award is new artist Olivia Rodrigo with her record breaking single titled “Drivers License.” Immediately following its release, “Drivers License” was ranked #1 on the US Billboard Top 100. Other strong options for nominees include “Good Days” by SZA, “Holy” by Justin Bieber featuring Chance the Rapper, “Levitating” by Dua Lipa featuring DaBaby, “Montero (Call Me By Your Name)” by Lil Nas X, “Positions” by Ariana Grande, “Therefore I Am” by Billie Eilish, “WAP” by Cardi B featuring Megan Thee Stallion, “Willow” by Taylor Swift, “Let Me Love You Like a Woman” by Lana Del Rey, and “Mr. Perfectly Fine” by Taylor Swift. Despite a large number of records that have extreme potential, the popularity of Rodrigo’s “Drivers License” is unmatched and suggests that she will be the recipient of Record of the Year in 2022.

Album of the Year is one of the most complex awards to be given out in the Grammys. With options from pop, country, rock, R&B, and more genres, the list of potential albums of the year is endless. The title is currently held by Taylor Swift for her album Folklore, where Swift drifted away from the pop genre and entered the world of alternative music. Swift continued her journey into the alternative world with a follow-up album to Folklore titled Evermore, which is another strong contender for Album of the Year in 2022; however, it was not as popular as her other album that could potentially receive a nomination. Fearless (Taylor’s Version) is Swift’s re-recorded album of Fearless, which actually won Album of the Year and debuted Swift’s career in 2009. There is a lot of hesitation around whether Swift can receive Album of the Year again for this album; however, the re-recorded album is unique and includes six never-before-heard songs, making it a completely new album.

Lana Del Rey’s seventh studio album Chemtrails Over the Country Club was released in early 2021, and though the album was statistically unsuccessful in comparison to her other albums, it had a few very popular songs, making it a strong contender. Rey has two other albums being released in June and July of 2021 titled Rock Candy Sweet and Blue Banisters that have already received a lot more traction than her previous album, making them even stronger contenders for Album of the Year. Miley Cyrus had a major change in genre this past year as well, with her rock album Plastic Hearts breaking records and maintaining a #1 rank on Billboard’s top 100 throughout December of 2020. Cyrus’s success will likely be met with a Grammy nomination this year. Silk Sonic and Olivia Rodrigo are both releasing their debut albums this year after having a lot of success with popular singles released this year. Rodrigo’s album Sour and Silk Sonic’s An Evening with Silk Sonic will more than likely be nominated for Album of the Year. Former Album of the Year winner Eilish is also releasing an album titled Happier Than Ever in July of 2021, which will absolutely receive a nomination. Other potential nominees include Justin Bieber for his album Justice, Megan Thee Stallion for Good News, Ariana Grande for Positions, Demi Lovato for Dancing with the Devil… The Art of Starting Over, and Kid Cudi for Man on the Moon III. Although this appears to be the most competitive category for the 2022 Grammys, there is no question about which album will have the most turmoil in the music community. Eilish’s Happier Than Ever will more than likely receive the award, making this the second Album of the Year win for Eilish.

The third category, Song of the Year, is another highly competitive award at the Grammys. Song of the Year focuses on songwriting and the significance of the lyrics, which is why “I Can’t Breathe” by H.E.R. was undoubtedly the winner of 2021’s Song of the Year, due to the significance of the lyrics in a year that brought so much injustice to light. That poses the question as to which song will have that same impact for the Grammys in 2022. H.E.R. could potentially sweep the song of the year yet again with her single titled “Damage,” which tackles emotionally abusive relationships, something that is extremely common and damaging particularly among youth. A powerful song like this is very deserving of this title. Former song of the year winner Eilish has the potential to reclaim this title with her recent song that is a part of her upcoming album Your Power. Lyrics in this song such as “Try not to abuse your power” and “You said you thought she was your age… How dare you?” bring light to abusive relationships, sexual coercion, and willful ignorance. Other potential nominees include “Lonely” by Justin Bieber and Benny Blanco, “Drivers License” by Olivia Rodrigo, “Therefore I Am” by Billie Eilish, “Heather” by Conan Gray, “Plastic Hearts” by Miley Cyrus, “Pay Your Way in Pain” by St. Vincent, “You All Over Me” by Taylor Swift featuring Maren Morris, and “Wonder” by Shawn Mendes. All of these songs have excelled through the charts and are deserving of this title. Based on the criteria being focused on songwriting and the message of the song, I believe Eilish will take home another Grammy for her song “Your Power” by winning Song of the Year.

The final category of the Big Four is Best New Artist. This award is given to a rising artist, not necessarily new, but one whose music has gained recent popularity and recognition for the first time in their career. Winning this title is arguably the most defining moment in an artist’s career, as it is the moment they go from a new, upcoming artist to a seasoned artist with a lot on the horizon. This is a title that can never be won twice, unlike the other three categories. Former winners include Billie Eilish, Megan Thee Stallion, Chance the Rapper, Sam Smith, Adele, Alicia Keys, and many more, all of whom continued to have a spectacular career following their big win. After a very successful year with a record breaking single and an album on the horizon, Olivia Rodrigo could receive this title. However, she must continue to release music this year that outperforms her single “Drivers License” so she does not lose the music community’s attention quickly and remains in the spotlight during voting season. Conan Gray had a lot of success with his single “Heather” and album Kid Krow in 2020. Although Gray is not a new artist, it was not until very recently that he received a lot of recognition and grew his fan base, which puts him in the running for Best New Artist. However, he has not released any music in 2021, which jeopardizes the possibility of receiving a nomination. Another potential nominee is artist King Princess, who is best known for her single “1950.” King Princess’s first studio album was released in 2020 with five songs on the album reaching the top charts on Apple Music, Spotify, and more. This increase in popularity only grew as King Princess continued to release more singles throughout 2020 and 2021, making her a very strong contender for Best New Artist. Other possible nominees include Flo Milli, Slowthai, Silk Sonic, and Tate McRae. Although many popular blogs and articles, including Forbes Magazine, have agreed that Olivia Rodrigo is a shoo-in for Best New Artist, I believe that King Princess has a strong chance at claiming this title in 2022.