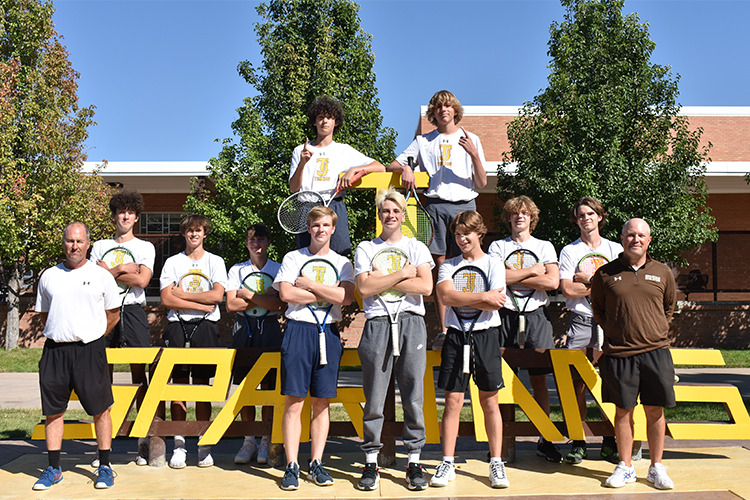 TJ Spartan’s tennis connect as a team without masks as restrictions drop in 2021. photo courtesy of yearbook staff

After a tough past year, the TJ Boys’ Tennis team overcame challenges building community and having a hard fought season.

The long awaited return to normal sports at Thomas Jefferson High School started with the fall season giving exciting opportunities to high school athletes, Boys’ Tennis returned for another successful season. After a difficult past year with lots of setbacks due to COVID-19, players returned ready to compete as the restrictions were dropped this year.

As the season returned to normal, there were a lot of players who came back, ready for a fresh start on the season. Head Coach Skyler Magee led this year with a great attitude as the team enjoyed daily training together as they built chemistry. Senior and strong leader, Louis Chaiken, expanded on this team chemistry, sharing that they are not only “really close and practice every day together,” but their “success is found through winning matches [and] having an amazing journey with each other.” The competitiveness that surrounds tennis is a great challenge, but it also creates strong bonds between the players. Many Spartan tennis players share this idea with Chaiken, one of whom being, junior, Issac Waldman, who stated that “everyone improved and that really added to the community piece of sports.” The team is continuously growing each year with more talent and opportunities for players, making the culture remarkable and the team excited to compete next year.

Chemistry is one of the most important things to have a successful team. Luckily, TJ Tennis is made up of a group of guys who have a great bond with each other, which is especially evident when it comes to the freshman population. As a freshman, it is often difficult to find opportunities to meet new people, but as junior Max Hauer states, “I’ve been able to meet a lot of new freshmen with interesting personalities through tennis, and without it, I would not be able to know a lot of my current friends.” Freshmen who take part in tennis are guaranteed to bond with some upperclassmen and learn about the school more in depth. The usual stress of making friends in high school can be reduced by joining a sport, such as tennis.

Regionals are always something athletes look forward to in every sport. This year, the boys did not place as well as they wanted to but are hopeful for the future. Junior Owen Robert placed 3rd with his doubles partner Dylan Huntsman, and expressed his excitement after regionals as, “this program is great, we are on the rise and will soon be State Champions!” Regionals is a very tough competition but the team battled as hard as they could to win.

At the end of the season, players were left unsatisfied but ready for some intense competition that will surely come next year. Many returning students are extremely excited for the future and the success that TJ can achieve through Regionals andState, and the Championship is becoming visible for the upcoming seasons.