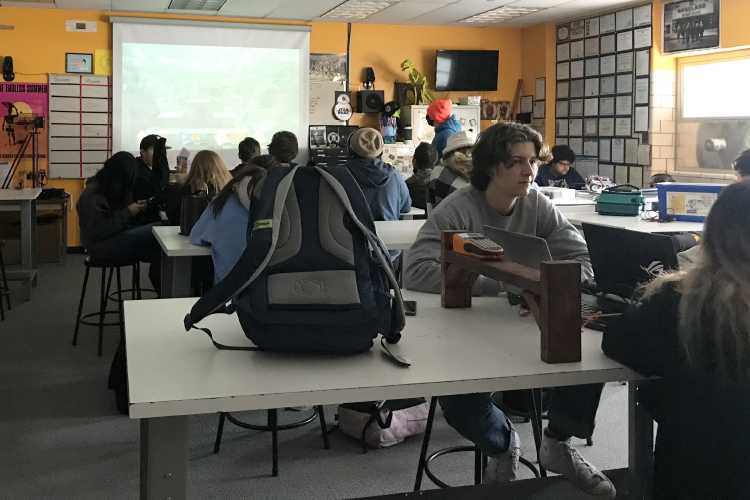 The members of gaming club socialize by collaborating on the smartboard or by bringing their own devices with a game of choice. photo by Ben Morlan

Walking into the robotics room on Fridays after school, one is met with the sight of people sitting at row-aligned tables playing video games on their computers, talking with friends, or listening to music. In the front two rows, people take turns playing Smash Bros on a Nintendo Switch projected onto a smartboard. The energy of the room is boisterous and upbeat, and everyone is busy with something. While there is little structure within the group, there is a common interest in the act of gaming binding everyone together.

Following their graduation from TJ five years ago, club sponsor Ty Ordway felt something was missing from the community. “When I was in high school, they had an anime club [and] a couple of other ones, but nothing that was a true video game club where people could come in, play games, and do whatever they wanted to,” they said. Out of a love for video games, Ordway decided to sponsor a club centered around gaming upon their return to TJ as a technology specialist for the Center for Communication and Technology magnet program. “I have always been interested in games, and I wished there was a club where my friends and I could come and connect with other people at the school who also loved video games.”

Club president Nolan Miller, a freshman, describes gaming club as a place where “you can just hang out, talk to other people, and just have fun.” Club attendees are not limited to what the rest of the group is doing as they are free to bring their own consoles and play their own games. “A lot of us play Smash Bros on the big screen, but a lot of us also bring our own devices,” he said as he pointed out his gaming laptop running a driving simulator called BeamNG Drive. The appeal of this club is not necessarily the games that are played, rather, it is the ability to socialize with fellow gamers. Miller says he joined because, “I thought our friends could have a good time here, and we could make new friends, too.”

One club attendee, sophomore Jackson Adams, said his favorite part of gaming club is the community. “Everyone is so inclusive, and since everyone has the same interests and hobbies, we can all connect with that.” He says the games of choice are “mainly Smash Bros, Minecraft, [and] any big game that can be brought to school.”

Another club member, freshman Cyrus Faragone, expressed a similar sentiment about feeling as though they belong within the gaming community. They said they were drawn to the club because, “I saw everyone playing Smash Bros, and to be honest, I have never played it before. I also saw how much fun everyone was having. Even if you are not doing actual gaming, we are just chatting. Overall, it is such a good environment.”

Unlike TJ’s Esports team which competes at a state and national level, gaming club does not have tournaments for members. “We plan to do tournaments in the future, maybe once we get a few more people. We could host it online or have a tournament bracket,” Miller said. However, club participants do have opportunities to compete against one another and hone their skills. “A lot of people are competitive playing Smash Bros on the big screen,” he said.

Gaming club is a low stakes, low-pressure environment where gaming enthusiasts of all backgrounds can come together and get to know each other. Ordway says the best part about it is that students can feel free to express themselves without fear of being shut down or feeling self-conscious. “We accept everybody. As long as there is no bullying or anything like that, they are totally allowed to be themselves in this space,” they said. Miller encourages anyone who has a passion for gaming and a desire to meet like-minded people to join.